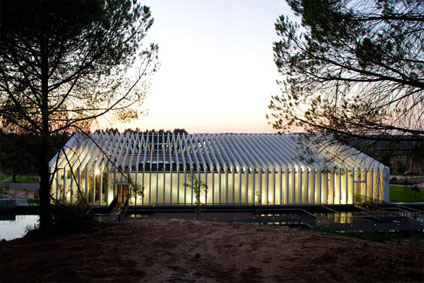 The Fluviario de Mora (Mora river aquarium) in Portugal is one of the new aquariums exclusively dedicated to freshwater habitats.
The Aquarium is housed in a beautiful modern building, designed by Lisbon-based architectural practice Promontorio .

The permanent exhibition of the Mora freshwater aquarium is divided in thematic section, presenting creatures from rivers and lakes, including that from exotic areas, and multimedia exhibits.

Along with being an exhibition centre, the Mora aquarium is also a scientific and cultural institution promoting education on environmental issues and biodiversity and organizes educational programs, conferences and workshops.
At the center, an auditorium and a cafe-restaurant are available to visitors.
The Mora river aquarium is fully accessible to people with disabilities. 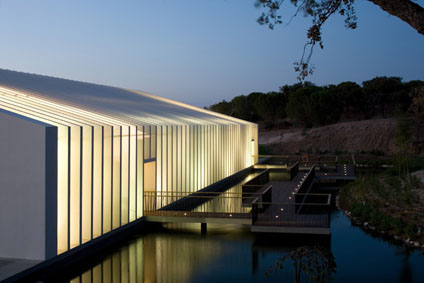 The River Mora Aquarium in Portugal is the largest freshwater aquarium in Europe. It is housed in a vibrant building designed by Promontorio architects

Den Blå Planet (the Blue Planet) in Kastrup, near Copenhagen, is the National Aquarium of Denmark and one of the largest structures of its kind in Europe

The Aquarium of Genoa is one of the largest structures of its type in Europe with 70 tanks housing over 15,000 animals: fish, amphibians and marine mammals