The Sforza Castle (Italian: Castello Sforzesco), probably the most renowned medieval building in Milan, features collections of fine and decorative arts presented into multiple museums under one roof.

The origins of the Sforza Castle date back to 1360, when Galeazzo II Visconti, ruler of Milan, built a defensive fortress near the city’s walls.
Enlarged in the following decades, in the early 15th century the castle was partially converted by duke Filippo Maria Visconti into the main residence of the House of Visconti.
In 1452 that the new ruler of Milan, Francesco Sforza, commissioned a team of architects and engineers – including Giovanni da Milano, Jacopo da Cortona, Marcoleone da Nogarolo, Antonio Averulino (also known as Filarete), and Bartolomeo Gadio – a complete redesign of the castle, with a view to make it both a residential palace and a modern fortress.
Yet, it was Francesco Sforza’s nephew, Ludovico il Moro, who made the castle a luxuriant palace decorated by some of the most celebrated artists of the time, including Donato Bramante, Bartolomeo Suardi known as Bramantino, and Leonardo da Vinci (who painted the ceiling of the Sala delle Tavole).
During the Spanish and Austrian dominations (from the 16th to 19th century), the castle was turned again into a fortress, and into a prison, which led the building to be seen by the people of Milan as a symbol of oppression and occupation by foreign powers.
It was only in the late 19th century that the Sforza Castle was restored – after designs by architect Luca Beltrami and, later, by Studio BBPR (Banfi, Belgiojoso, Peressutti, Rogers) – and converted into a museum.

Most important museums and collections

As anticipated, the Sforza Castle accommodates a number of museums of fine art, decorative arts, and history located on four levels.

The Archaeological Museum is divided into two main sections. The Sezione Preistoria (Prehistory Section) presents prehistoric artifacts found in Northern Italy and depicts the history of the region since 5,000 BC. The Sezione Egizia (Egyptian Section) presents one of the largest collections of Egyptian antiquities in Italy, including sarcophagi, mummies, statues, everyday objects, and papyri.

The Museo di arte antica (Museum of Ancient Art), on the ground floor, is dedicated to the history of Milan depicted through a collection amounting to about 2,000 artworks, especially sculptures, architectural decorations, ceramics, and other artifacts dating from the early Christianity to the 16th century.

The Museum of Musical instruments holds a collection of over 900 instruments, 500 of which are on display, made from the 16th to the 20th century; notable pieces on view include rare harpsichords and a 17th-century violin by Andrea Guarneri.

The Museo delle Arti Decorative is one of the largest museums of decorative arts in Italy; it presents artifacts dating from the early Middle Ages to the present, including tapestries, ivories, metalworks, silvers, glassware, porcelains and ceramics, arms, and jewels.

Opened on May 2, 2015, in the newly-restored spaces of the former Ospedale Spagnolo (Spanish Hospital), the Museo della Pietà features the famous Rondanini Pietà unfinished sculpture by Michelangelo.

The Sforza Castle also includes a library of rare books and manuscripts (which also holds the famous Codex Trivultianus by Leonardo da Vinci), a collection of prints, a collection of coins and medals, a photographic archive, and a notable collection of drawings (including a Head of Leda attributed to Leonardo).

The Castello Sforzesco is sited in the heart of Milan, a ten minutes’ walk from the city’s Cathedral; the metro station Cairoli Castello (line 1) is located just in front of the castle’s main entrance. 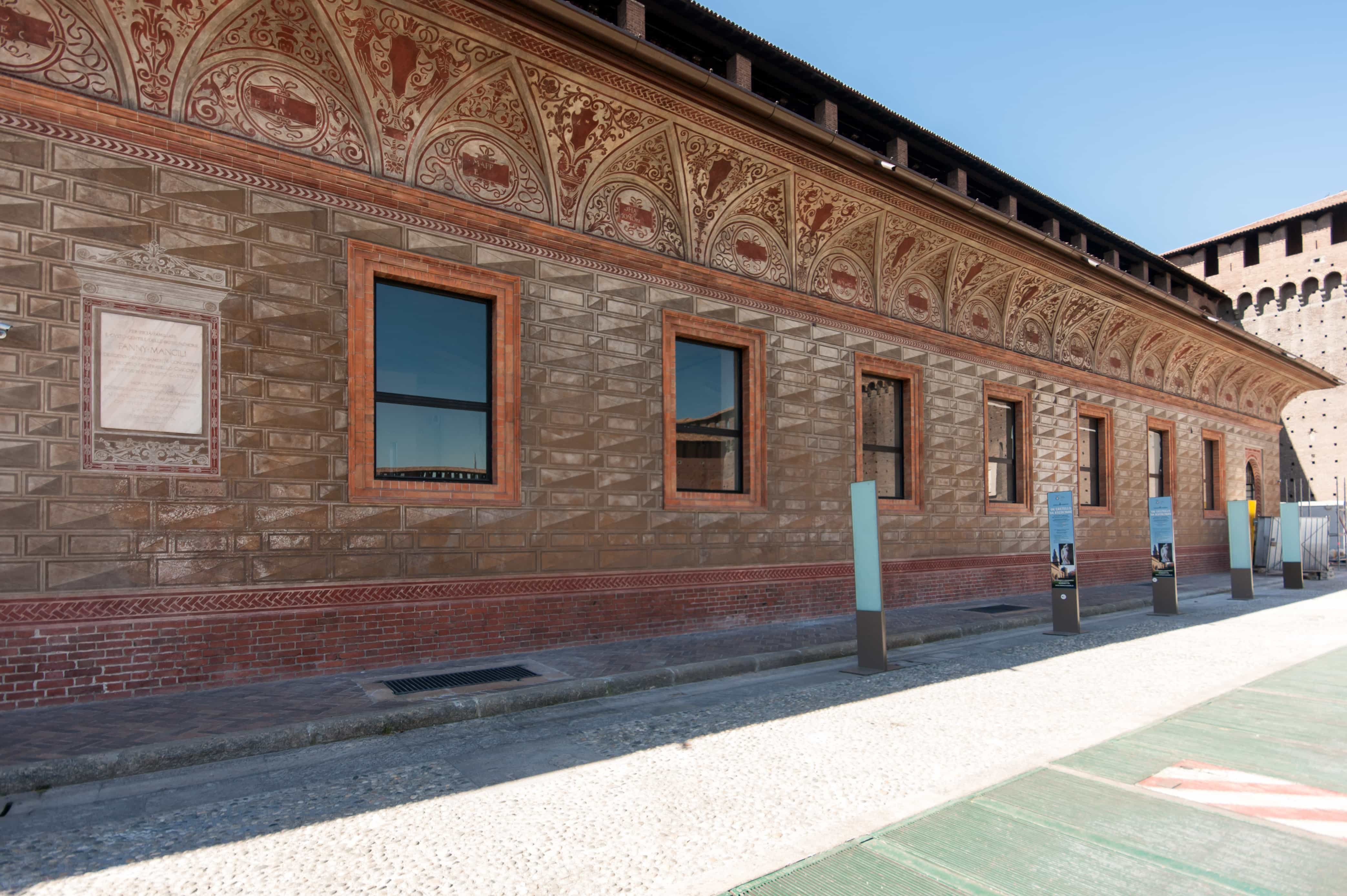 Cover image: the Sforza Castle in Milan, view of the north wing from the main court; photo © Inexhibit

May 2015 will be remembered in Milan as the month the Rondani Pietà by Michelangelo finally found a proper home: the Museo della Pietà in the Sforza Castle