In Hamburg, Germany, a new flood protection barrier was designed by Zaha Hadid Architects. The new quay is now a liveable public space that connects the long river with the urban fabric of the city.

Located at Niederhafen on the Elbe River between St. Pauli Landungsbrücken and Baumwall in Hamburg, the upgraded 625m river promenade is integral to the modernization and reinforcement of the city’s flood protection system. In the aftermath of storm surge floods in February 1962 that caused 315 fatalities and destroyed the homes of 60,000 residents, between 1964 and 1968 Hamburg developed a barrier on the banks of the Elbe at Niederhafen to protect the city against floods up to a height of 7.20m above sea level.
Modern hydrology and computer simulations have since analyzed and forecast the city’s flooding characteristics with greater accuracy; calculating that an increase in the barrier height of 0.80m was required to protect Hamburg from future winter storm surges and extreme high tides.
Inspections of Niederhafen’s existing flood barrier in 2006 determined that supporting elements of the existing structure were overburdened and its foundations needed significant reinforcement.  At this time, the city of Hamburg organized a competition to design the redeveloped flood barrier and subsequently awarded the project to Zaha Hadid Architects. 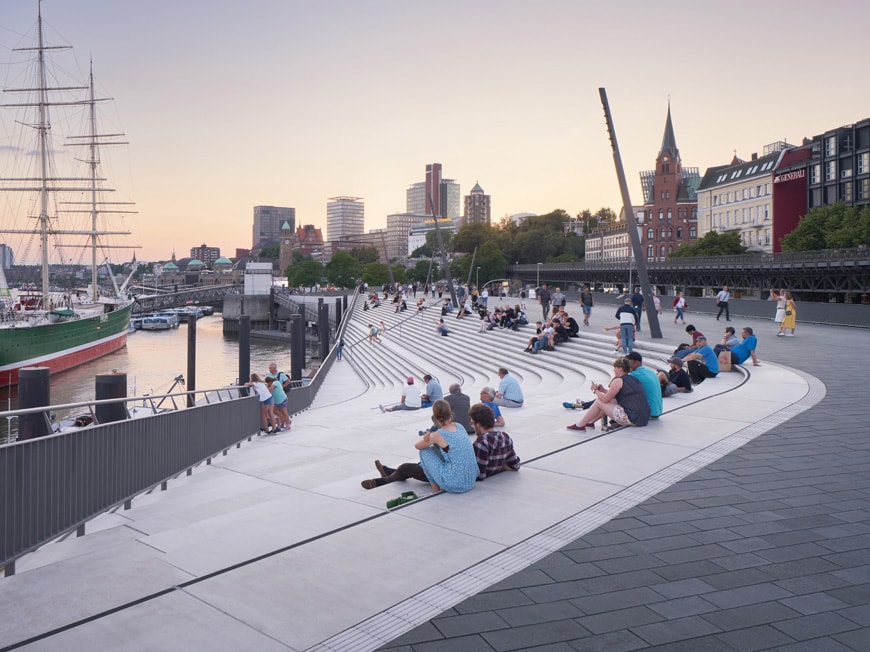 Hamburg’s Niederhafen flood protection barrier is in a prominent location that incorporates the city’s renowned riverside promenade – a major attraction for tourists and one of Hamburg’s most important public spaces. Situated on top of the flood protection barrier, the promenade provides undisturbed views of the Elbe and the port. With the construction of all stages now complete, Zaha Hadid Architects’ design for the redevelopment of Hamburg’s Niederhafen flood protection barrier re-connects its river promenade with the surrounding urban fabric of the city, serving as a popular riverside walkway while also creating links with adjacent neighborhoods.
The linear structure is 8.60m above sea level in its eastern section and 8.90m above sea level in its western section to protect the city from maximum winter storm surges and extreme high tides. A minimum width of ten meters ensures this popular riverside promenade offers generous public spaces for pedestrians, joggers, street performers, food stalls and cafes; shops and public utilities are also accommodated within the structure at street level facing the city.

Wide staircases resembling small amphitheaters are carved within the flood protection barrier at points where streets from the adjacent neighborhoods meet the structure, giving passers-by at street-level views of the people strolling along the promenade at the top of the barrier as well as views of the masts and superstructures of ships in the Elbe. These staircases are orientated towards their intersecting city streets: Stubbenhuk, Neustädter Neuer Weg, Rambachstraße, Reimarusstraße, and Ditmar-Koel-Straße. Alternating with these city-facing stairs, similar amphitheaters facing the river are also carved within the structure, generating an oscillating sequence in the river promenade as it repeatedly widens and narrows.
Dedicated cycle lanes at street level run the length of the flood protection barrier. Wide ramps at Baumwell and Landungsbrücken connect the river promenade with street level and provide accessibility for all. A third central ramp enables service vehicles to access the promenade and Überseebrücke. The zone to the west is at a larger scale, offering wide views downstream of all shipping activity on the river. To the east, the port’s marina creates a more intimate atmosphere with a long ramp alongside the amphitheater leading visitors down to the water’s edge.
A three-story restaurant and two food kiosks are integrated within the flood protection structure. 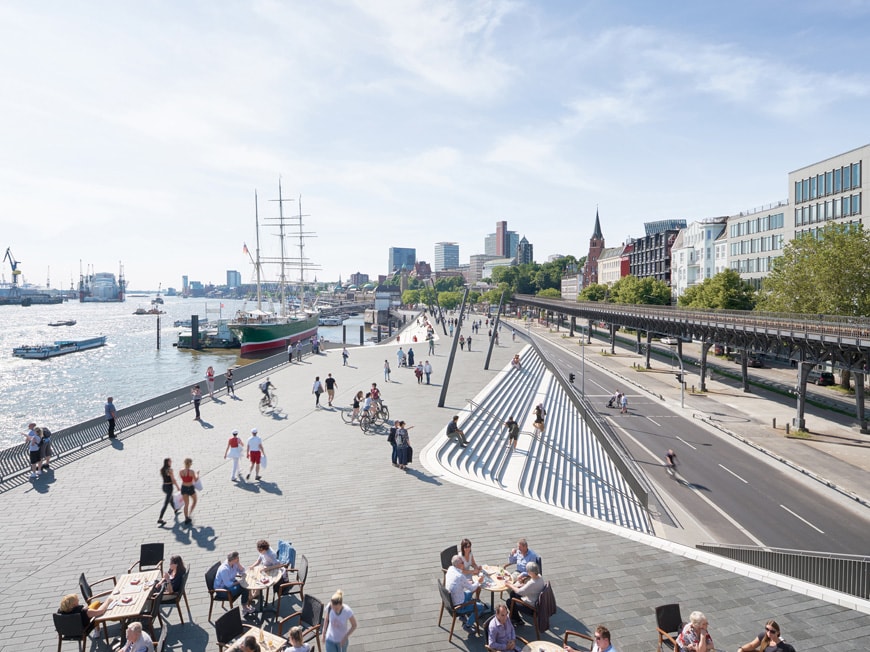 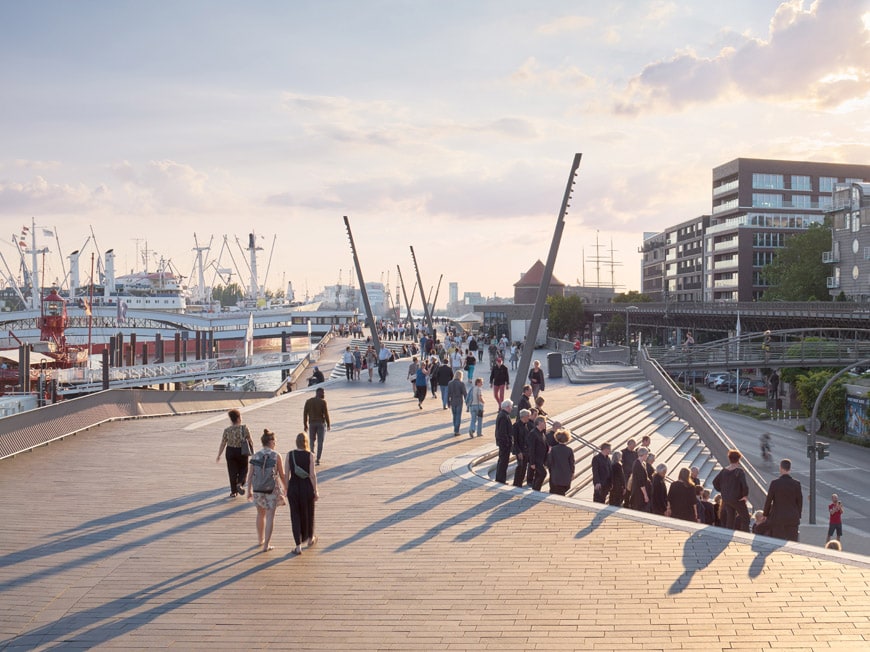