Bozen | The secret fortress of Mussolini 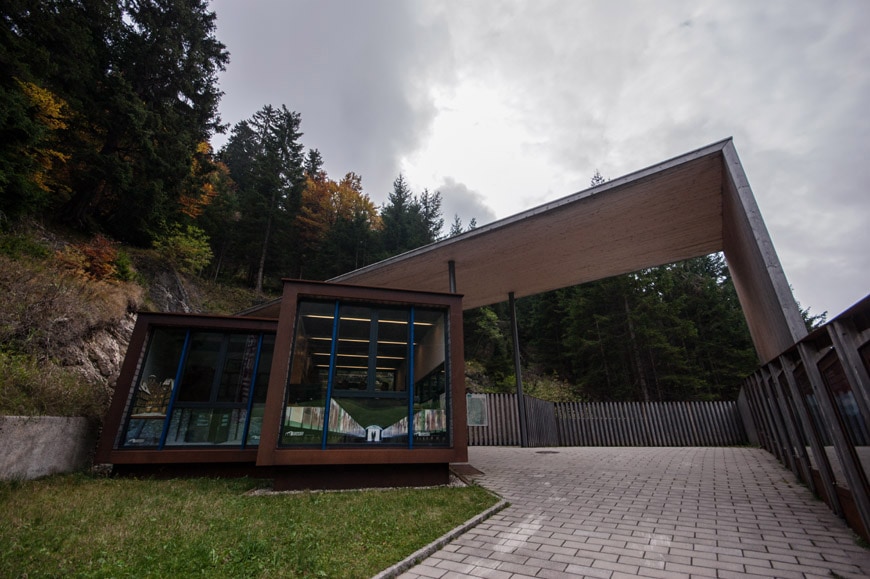 The Gampen Gallery visitor centre and main entrance at the Gampen high mountain pass (1,518 metres) in the South Tyrol Alps

People crossing the Gampen Pass on the road 238 along the Deutschnonsberg valley in South Tyrol should pay attention to a small building with the sign “Gampen Gallery”.
It is indeed a quite unconventional public exhibition gallery located in one of the hidden fortifications that once formed the “Alpine Wall”, a grandiose defense system also known as “Linea non mi fido” (“I do not trust him” line) wanted by Mussolini, distrustful of the Germany ally and concerned about an invasion of Italy by Hitler’s troops.
Between 1940 and 1941 the Gampen (Palade in Italian) fortress was secretly dug into the mountain by about four hundreds workers, mainly from Southern Italy, almost invisible to the local population, unaware of the prodigious structure they were building and of its actual purpose.
The fortification did never reach its full completion. After one year, in July, 1941, Mussolini ordered to stop the works. 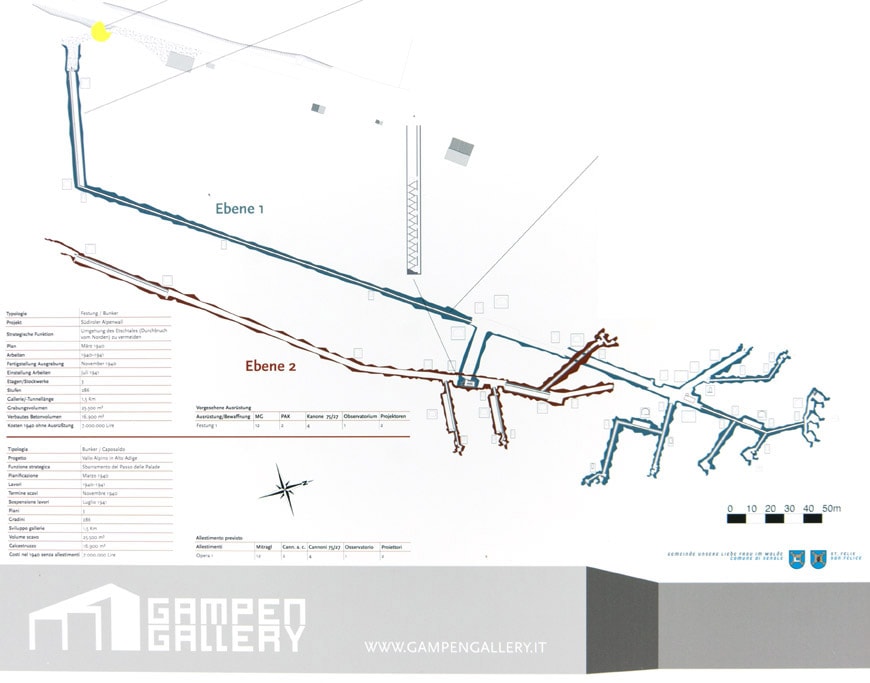 Map of the 1,5 kilometres-long tunnel system

After decades of abandonment, thanks to a rehabilitation project jointly promoted by the Unsere Liebe Frau im Walde-St.Felix municipality and the Alta Val di Non/Deutschnonsberg tourism agency, in 2010 the bunker tunnels were opened to the public and the space was partially converted in an exhibition gallery.
The gallery is not, as many could expect, an history of ethnographic museum; the fascinating story of what the place once was is indeed told in person by a passionate and competent guide.
The Gampen Gallery is above all a place that speaks for itself, that through its own existence is capable to make people aware of a not so known, yet noteworthy, piece of Europe’s recent history.
Through its powerful appearance, which makes it looks as newly completed , the bunker speaks about the foolishness of war and of its consequences on people, like those forced to toil for years on something that eventually proved to be a non-sense. 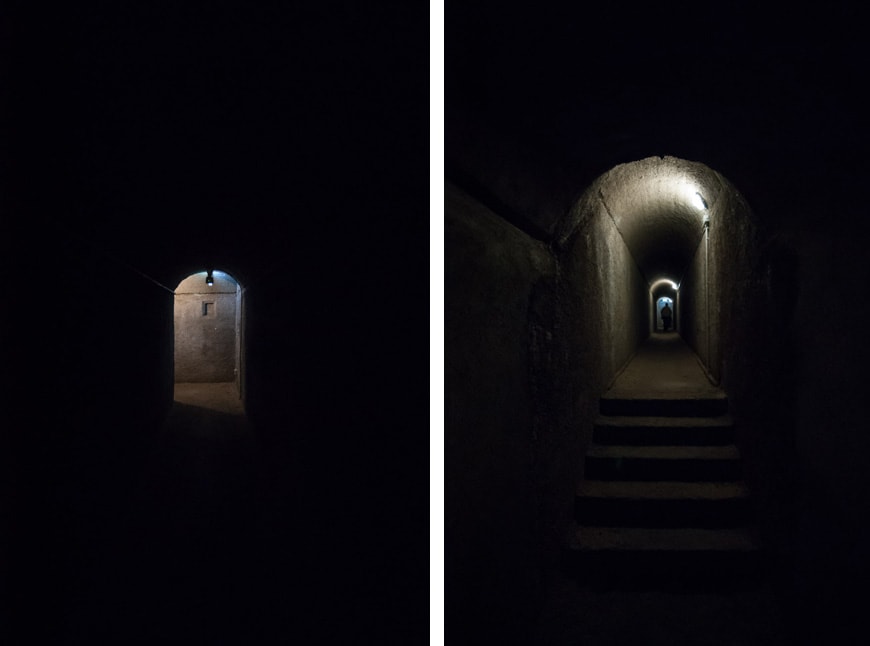 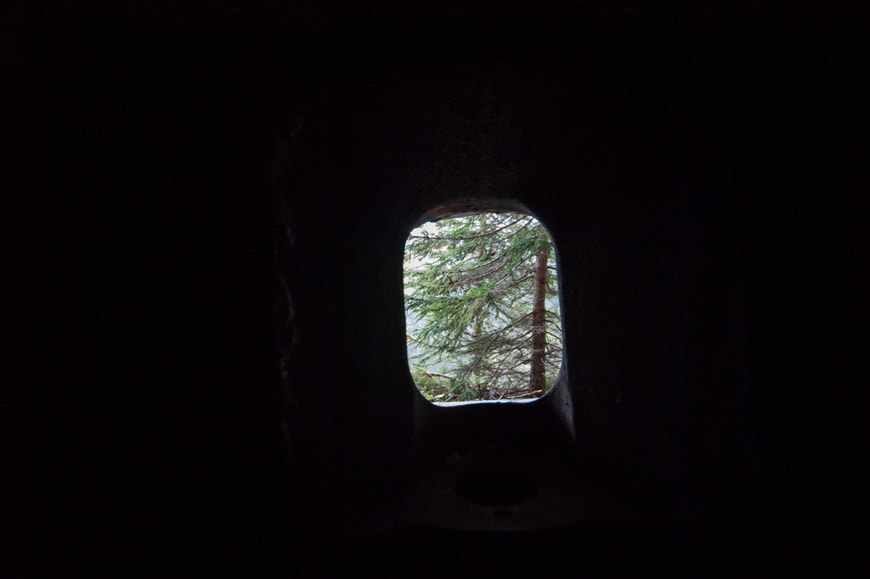 Some views of the concrete-clad tunnels, some of them is over 200 metres long

The fortress is constituted by an impressive sequence of concrete-clad tunnels dug into the mountain, 1,5 kilometers long and distributed on 4 levels, they are inter-connected by staircases and elevator shafts.
The width and dimension of the tunnels considerably differ from one another, narrow corridors no more than 80 centimeters wide, but hundreds meters long, alternate to wide, imposing galleries.
The walls, often finished with cement plaster, still show the recesses envisaged to house telephones and power lines; the gun bunkers are still equipped with massive iron plates fixed around the embrasures. 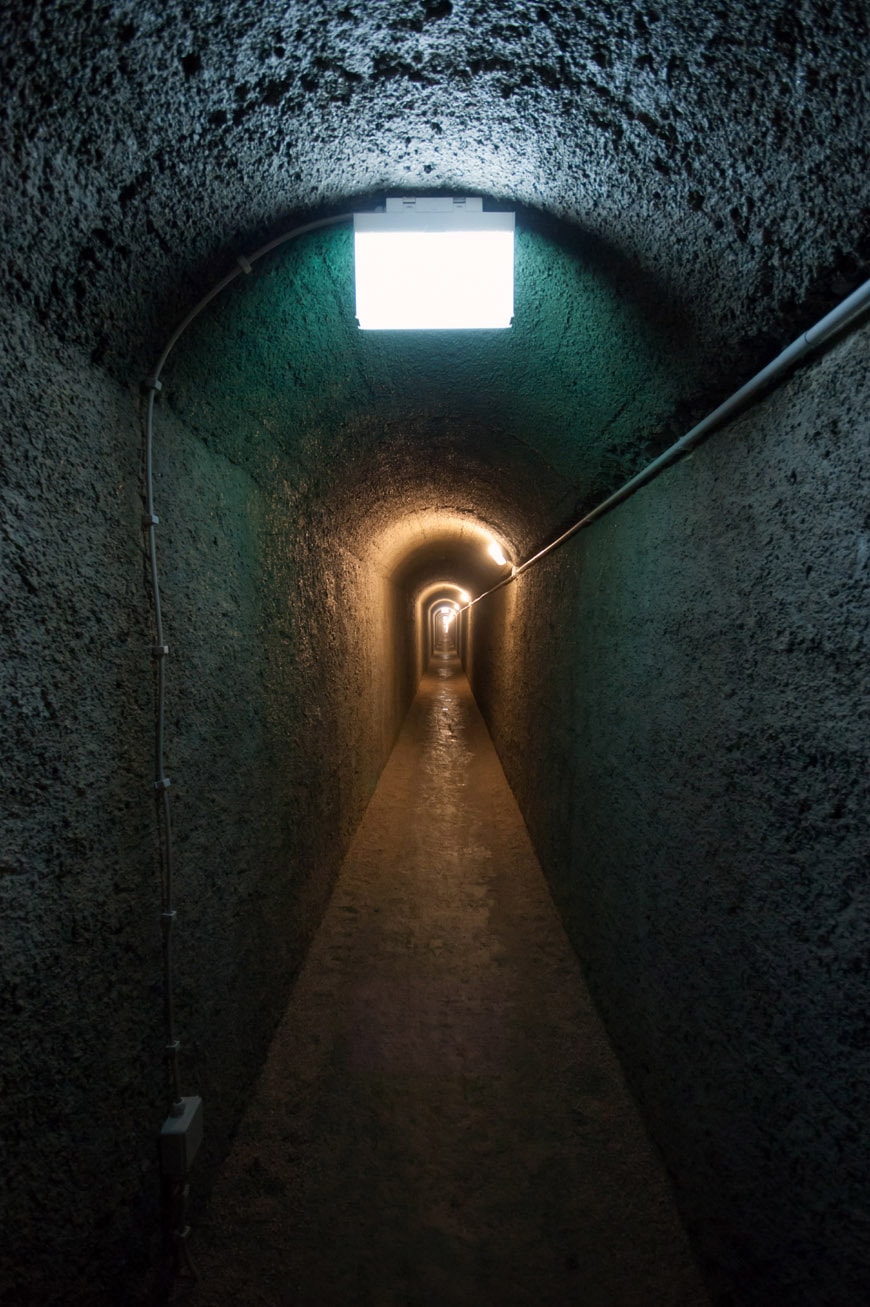 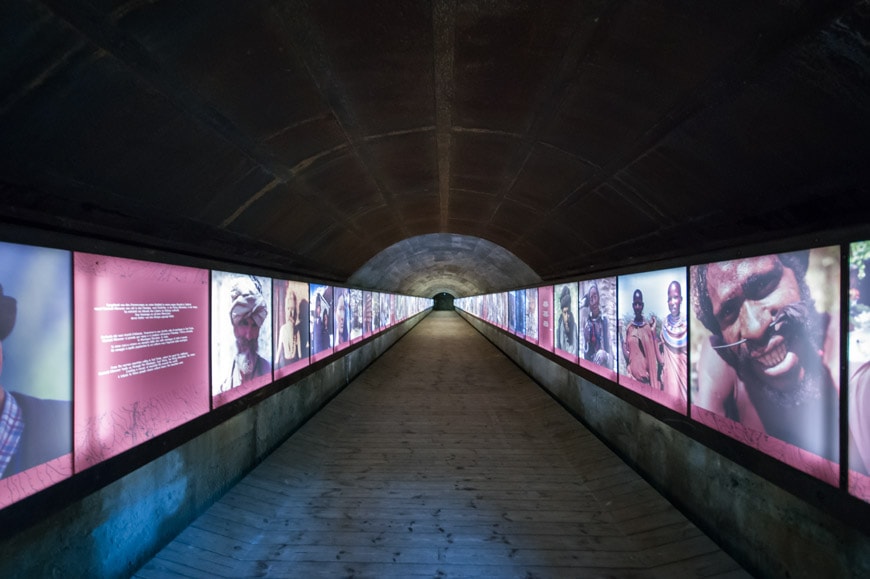 The above images show one of the iron-plate protected gun chambers, an elevator shaft over 40 meters high, one of the main galleries and the photographic installation housed in the entrance gallery

The Gampen Gallery currently hosts two permanent exhibitions.
One, housed in the fascinating vaulted gallery right after the main entrance, is an impressive installation made of two long rows of photographs mounted on light-boxes. The exhibition, curated by the famous mountaineer Reinhold Messner, is dedicated to similarities and analogies between mountain populations from all over the world, from Caucasus to North Africa, from Near East to Turkestan. 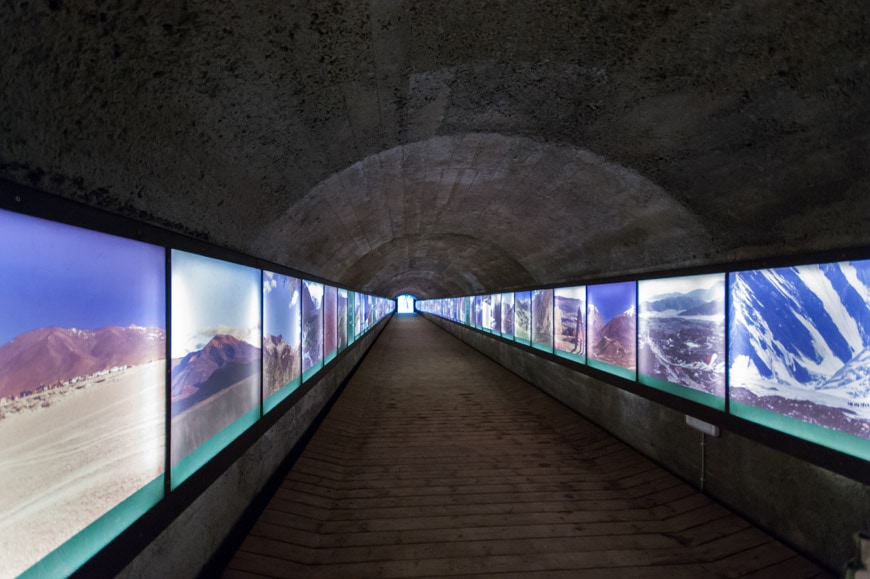 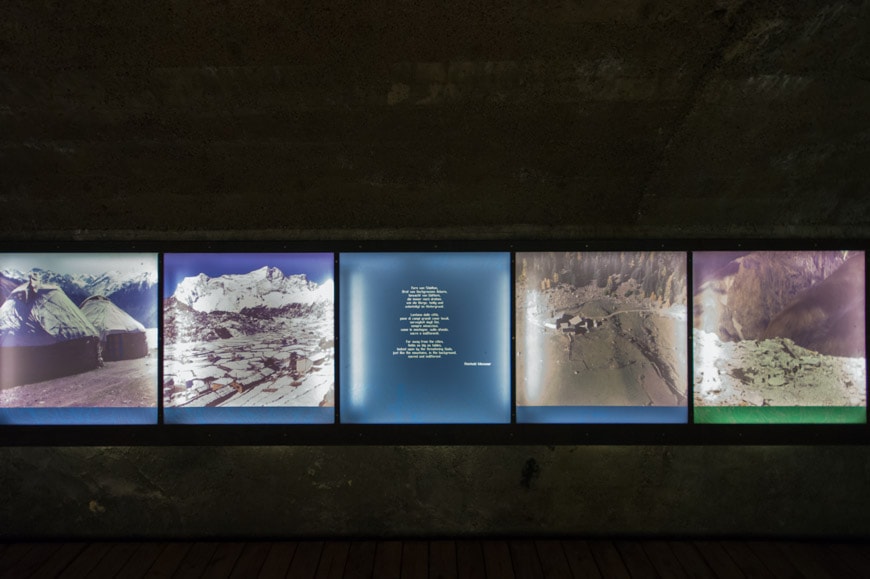 The second permanent exhibition has been installed recently: it is a sequence of illuminated showcases housing a large and comprehensive collection of minerals from the whole Europe, curated by Toni Kiem. A suggestive circumstance is that, differently from a traditional Natural History museum, crystals and findings are here surrounded by living geology and it rather looks as they came back into the mountains they were once removed from. 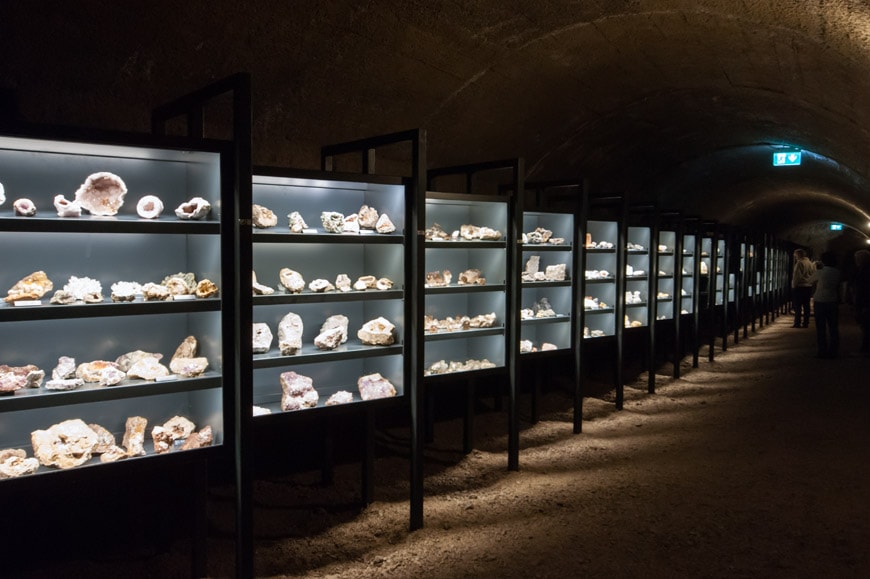 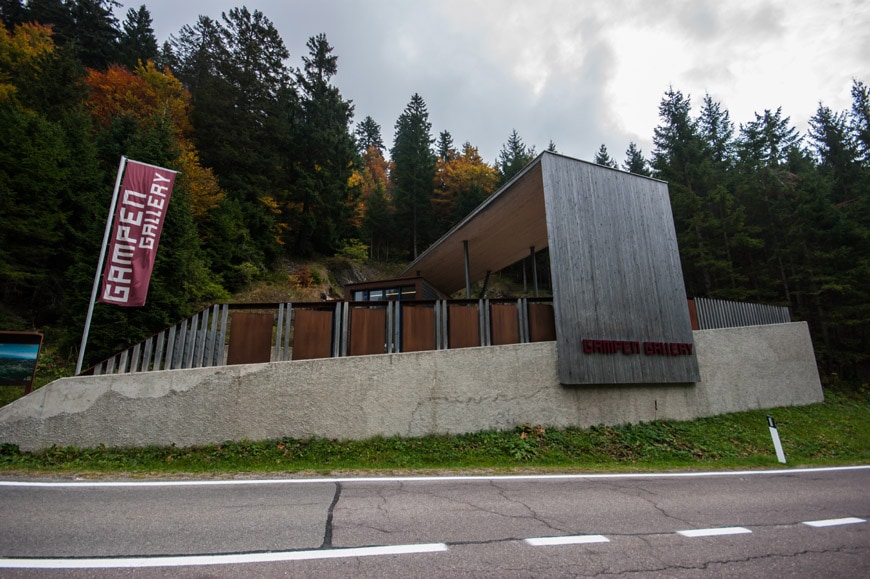 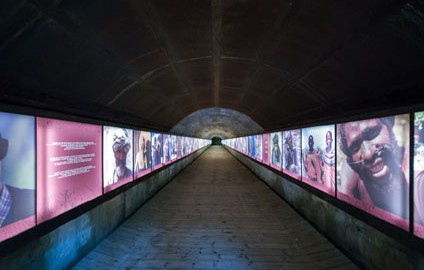