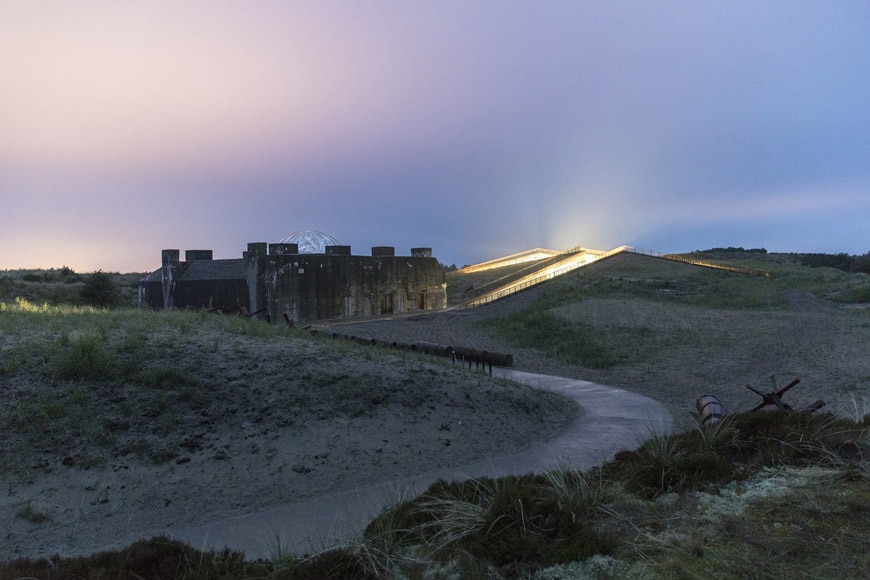 The TIRPITZ museum in Blåvand, Denmark, photo by Laurian Ghinitou, courtesy of BIG

Part of the municipality of Varde, Blåvand is a small coastal village facing the North Sea on the western edge of Denmark’s Jutland Peninsula.
If I could fly, like one of the many seagulls which populate the beautiful cliffs around, going west for about 400 miles I will land near Newcastle upon Tyne, Britain.

And that’s exactly the reason why, during World War II, the occupying German troops built a series of bunkers in this area.

The bunkers were part of a larger fortification project, known as Atlantic Wall and spanning over 5,000 kilometers along the European Atlantic Sea coastline, aimed to “defend” the Reich from British airplane incursions, as well as from a possible Allied invasion. Overall, about 200 bunkers were built in Denmark during the war.

Due to its strategical position near the harbor of Esbjerg, the area of Blåvand was heavily fortified and some 50 bunkers were built around here. Some of them were truly monumental, such as the so-called Tirpitz bunker, a 3,5-meter thick concrete fortification built in late 1944 to house a huge 38cm gun turret recovered from a decommissioned German battleship. Yet, the Tirpitz bunker was not completed before the capitulation of Germany, in May 1945, and the naval battery was never installed. 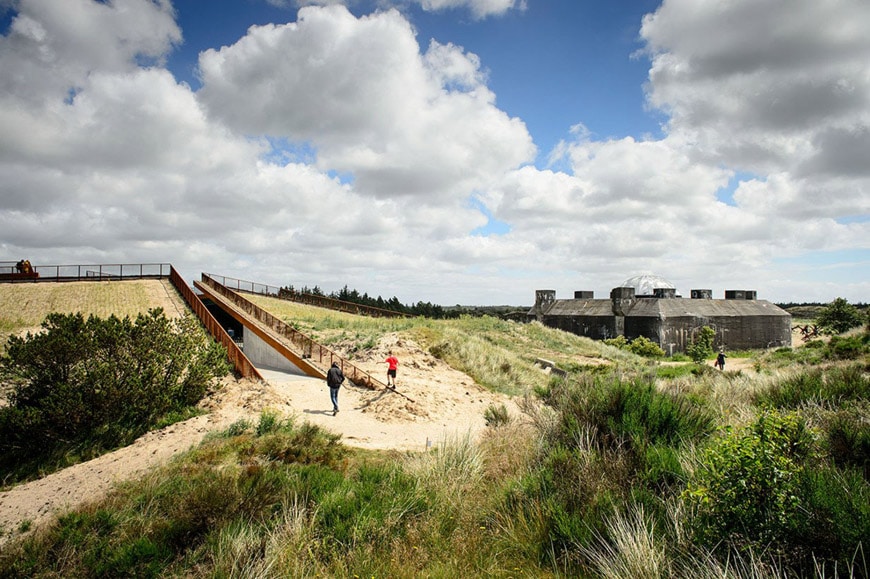 The TIRPITZ museum, photo by Mike Bink, courtesy of BIG

Aerial view of the Tirpitz bunker before the construction of the museum, image courtesy of Tirpitz Museum 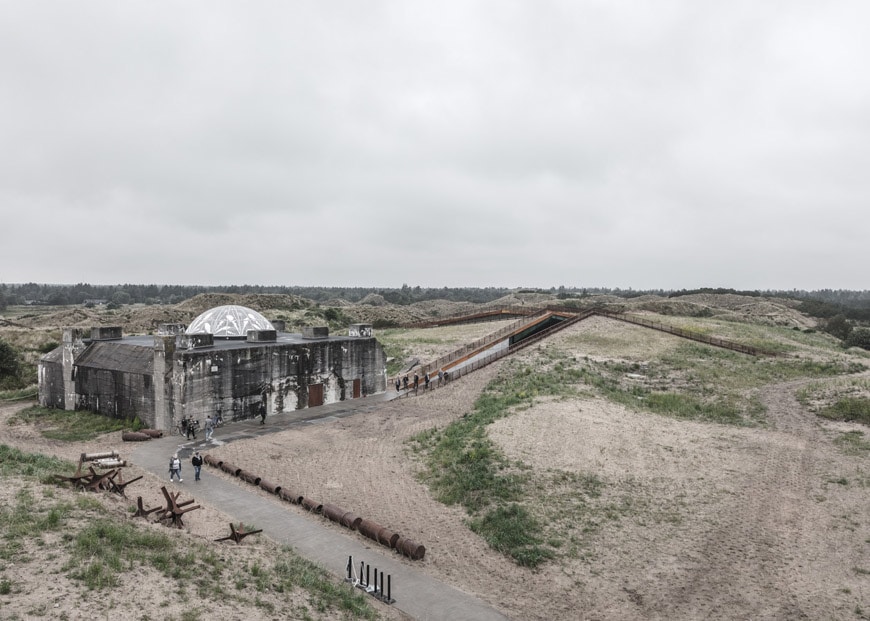 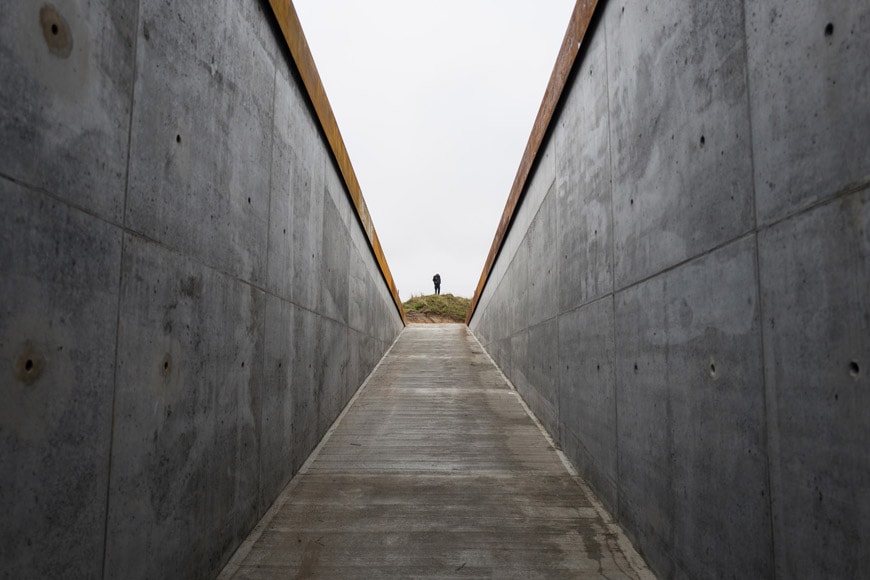 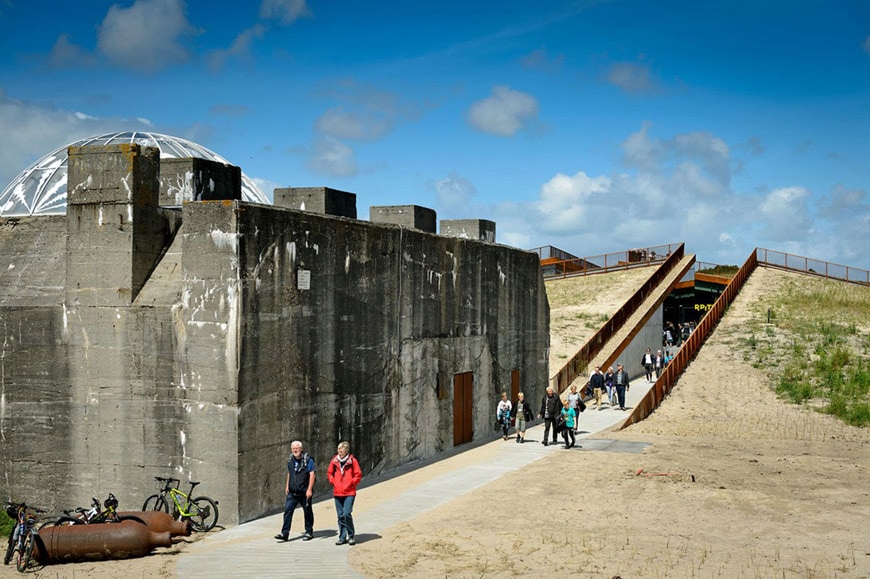 The main entrance of the TIRPITZ museum, photo by Mike Bink

After the war, the Allies blew up most of the bunkers in the area but the main fortification was saved and eventually converted in 1991 by the municipality of Varde into a small museum dedicated to the history of the Atlantic Wall.

In 2012, the Museums of Varde, with the financial support of the A.P. Møller Foundation, took the decision to enlarge the museum and create a cultural center, the Blåvand Bunkermuseum, accommodating four distinct venues: a bunker museum, an amber museum, a museum of local history (called Histolarium), and a gallery for temporary exhibitions.
Acclaimed architectural firm BIG – Bjarke Ingels Group was therefore commissioned to design the new museum complex.

Encompassing a gross floor area of 27,000 square feet, the two-story museum includes – along with with exhibition spaces – a cafe, administration offices, and various service spaces.
After three years of construction works, in July 2017, the new museum complex, simply named TIRPITZ, opened to the public.

The approach by BIG to the project is both rational and sensitive; it creates indeed a dynamic dialogue between old and new, as well as between natural and artificial.
While the old bunker is massive and protruding from the ground, the expansion conceived by BIG is transparent and cut into the landscape.
Arranged around a shared central courtyard, the four main exhibition galleries are each housed in a dedicated rectangular-shaped space.

The galleries can be either independently accessed from the courtyard/lobby or after one another, in a continuous circular loop.
The public enter the museum through a footpath cut into the surrounding dunes and connected to a trail network that runs across the site; an underground passage then links the museum to the Tirpitz bunker.
The open-air lobby is slightly rotated, so to add a skylight to the entrance of each gallery and to provide independent access to all of them.

The building structure is mostly made in bare reinforced concrete with four large slabs, slightly tilted so to visually remember the surrounding dunes, covering the exhibition galleries. Double-height windows separate the galleries from the central courtyard. 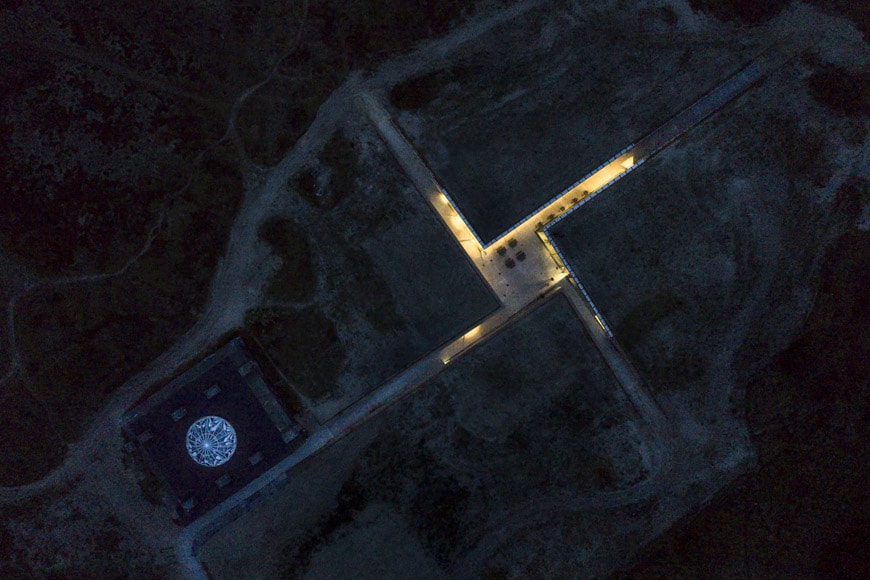 Aerial view of the TIRPITZ site with the bunker on the left and the new building on the right; photo by Laurian Ghinitou, courtesy of BIG 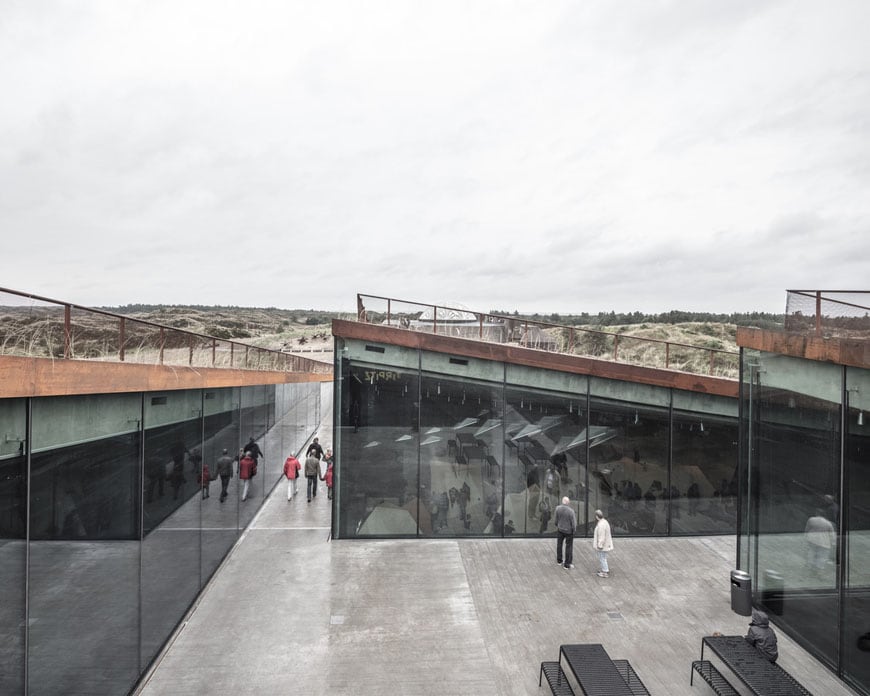 View of the courtyard; photo by Rasmus Hjortshøj; courtesy of BIG 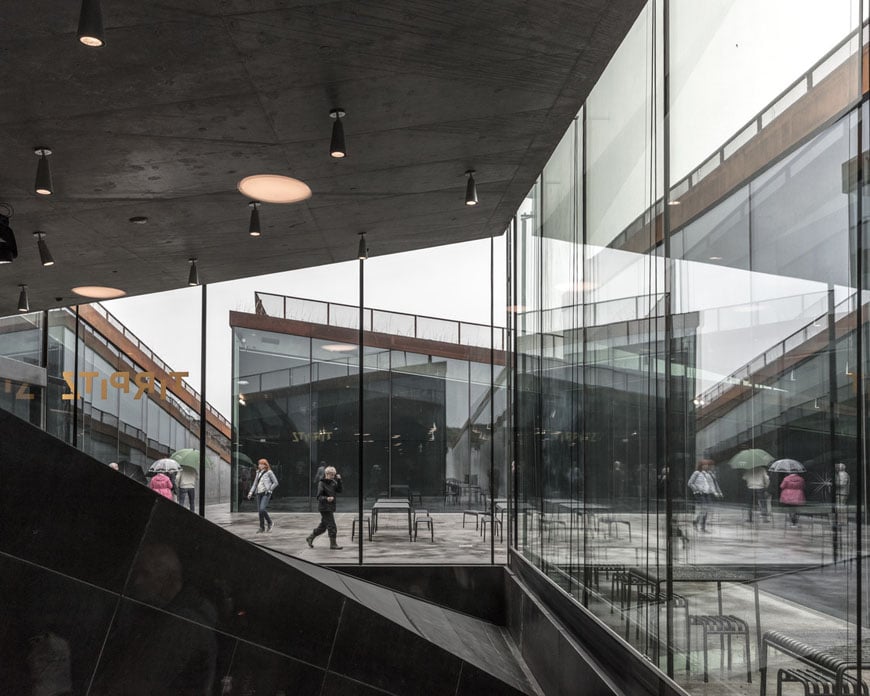 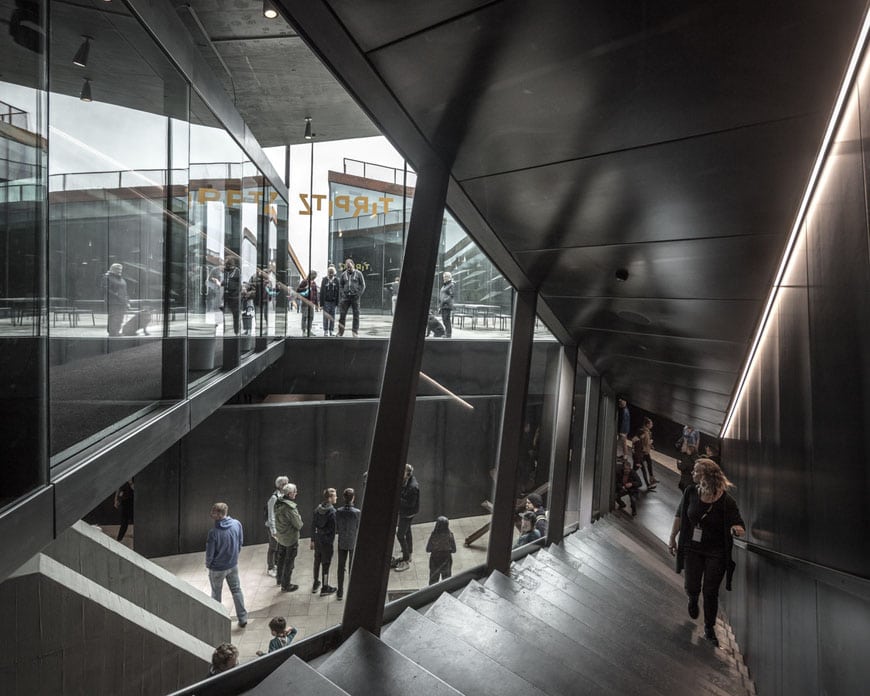 Interior views of the museum; photos by Rasmus Hjortshøj 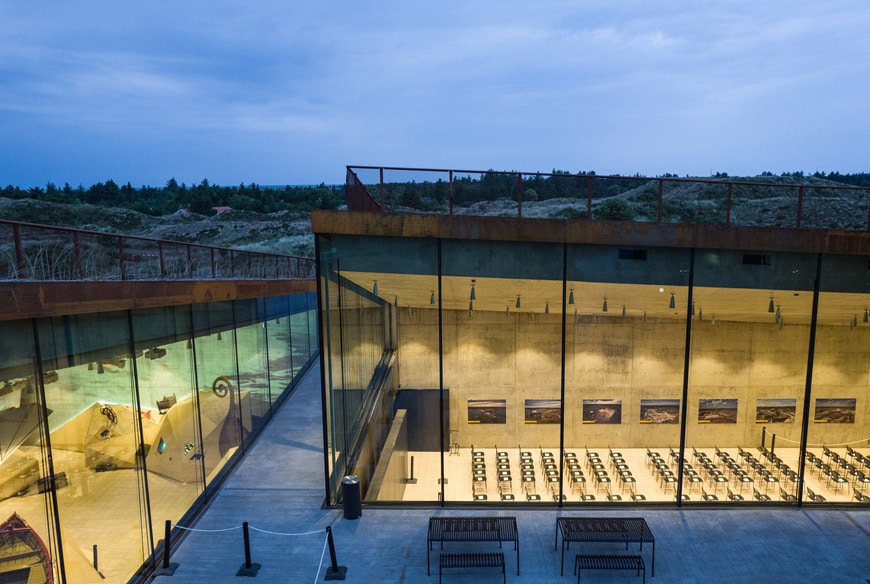 The main courtyard at sunset; photo by Frederik Lyng 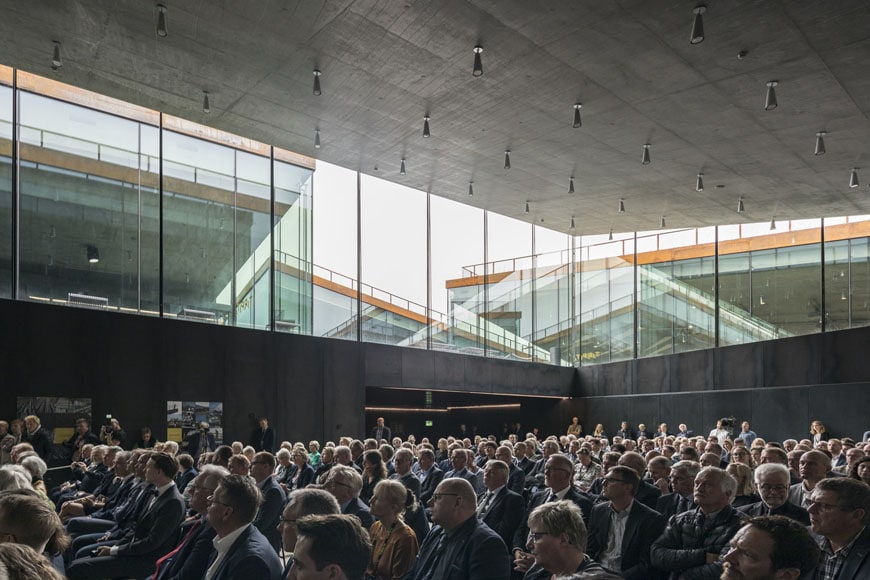 The auditorium; photo by Laurian Ghinitoiu

Army of Concrete depicts the history of the Atlantic Wall, the gigantic defensive system built by Nazi Germany and of which the Tirpitz bunker was part.
Gold of the West Coast is one of the world’s largest exhibitions dedicated to amber, the “Danish Gold”, the region in which the museum is located is rich.
West Coast Stories is both an exhibition and a state-of-the-art multimedia experience that tells the history of Denmark’s west coast throughout 100,000 years.

Finally, the visit to the historic bunker features, along with the impressive defensive structure itself, an array of shadow plays, which can be activated by the visitors, disclosing how the bunker should have functioned. 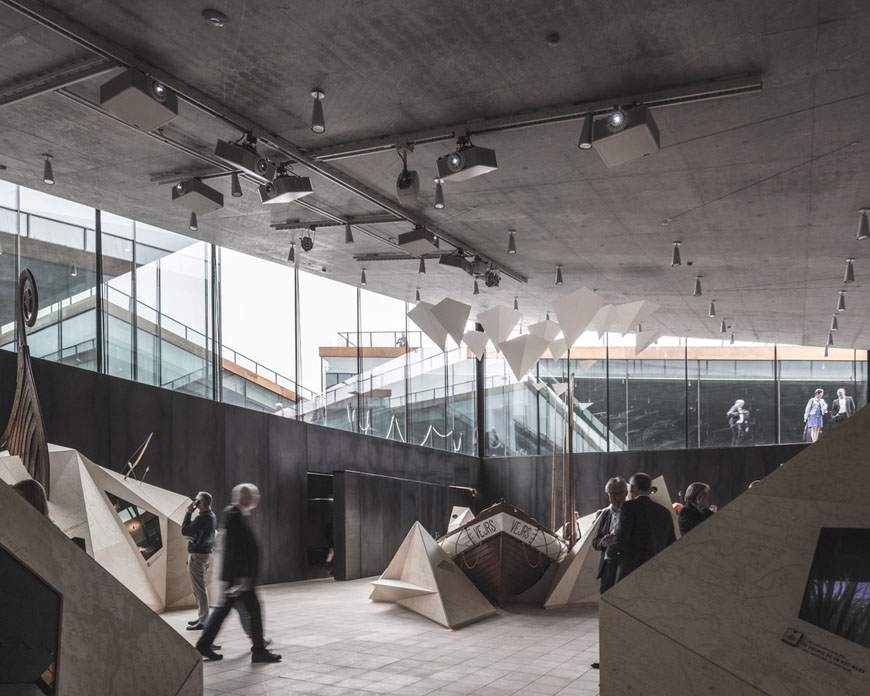 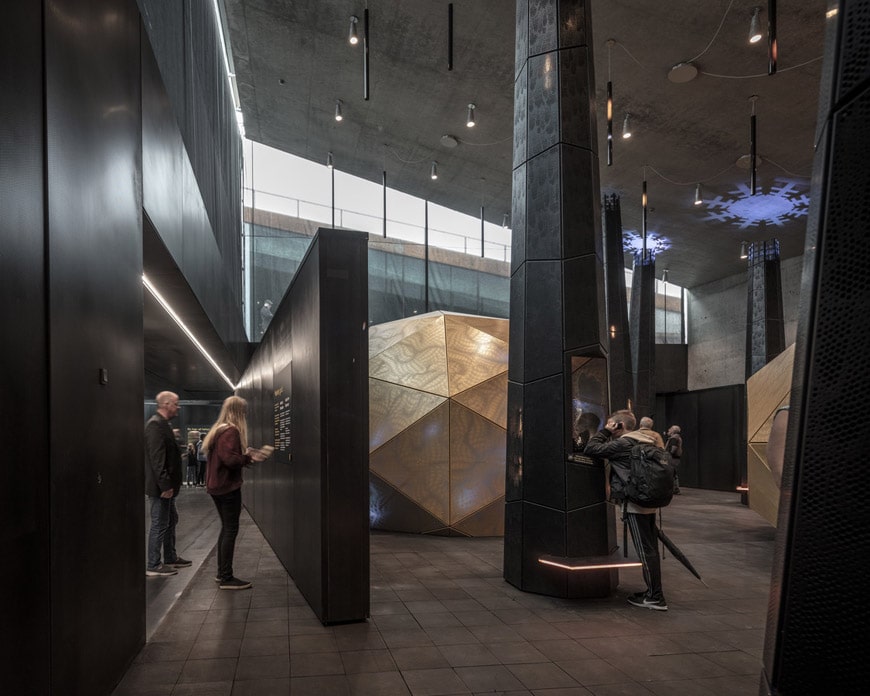 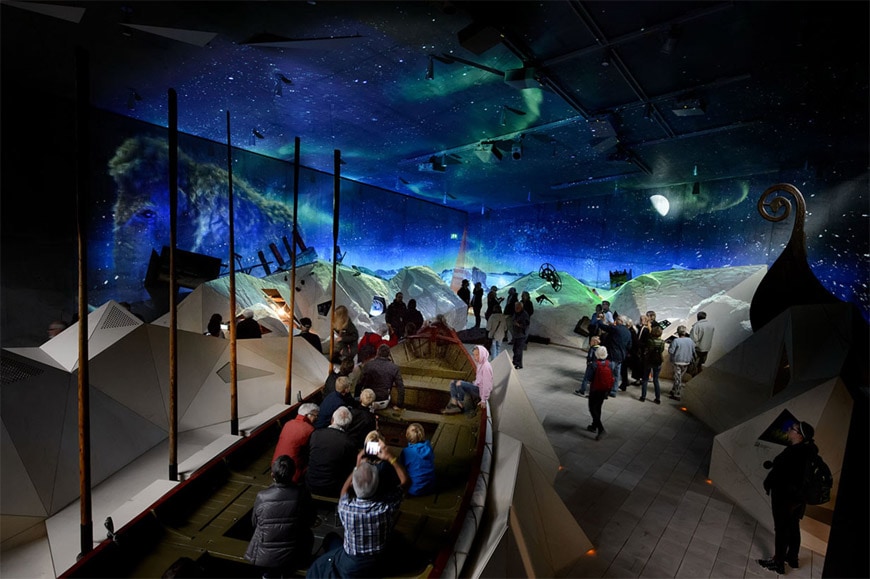 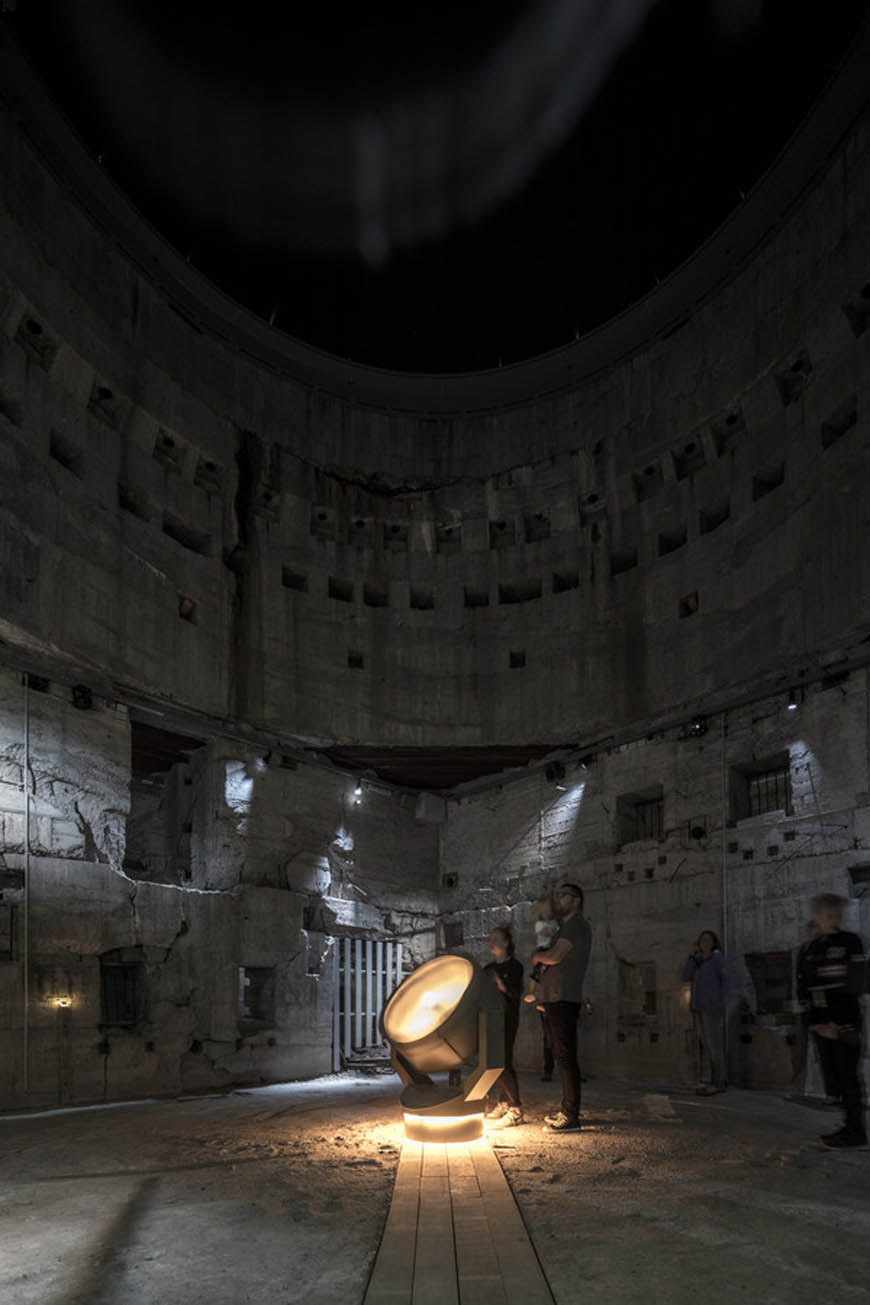 Exhibition in the historic bunker; photo by Rasmus Hjortshøj