In April 13, 2013, the Rijksmuseum reopened its doors after a ten-year-long major renovation, expansion and update.

In 2000, in order to renovate the museum, the old Gothic-revival building, designed by Dutch architect Pierre Cuypers in the late-19th century, was closed and, after an international competition, Spanish practice Cruz y Ortiz arquitectos was commissioned to design the new Rijksmuseum, in collaboration with French architect Jean-Michel Wilmotte for the furniture design and Dutch practice Van Hoogevest Architecten for the restoration of the historical decorative apparatus.

The renovation project devised the construction of two brand new buildings, the Asian Pavilion and the Atelier Building, as well as the realization of two facilities, the Atrium -the museum new main entrance hall- and the Philips Wing -a new exhibition gallery- inside already existing spaces, yet completely remodeled.

Thanks to the courtesy of Cruz y Ortiz, we present here the whole renovation project. Due to its complexity and relevance we divide the article into two parts: the first featuring the new Atrium and the Asian Pavilion, and the second presenting the Philips Wing and the Atelier Building.

Rijksmuseum – the Atrium
The Atrium is a large entrance area, publicly accessible, created by covering two internal courtyards, encircled by the Cuypers’ brick buildings, and connected to one another by a gently-sloped tunnel, located underneath the main access passage.
The space conceived by Cruz y Ortiz copes with the imposing Gothic architecture of the old palace by juxtaposing clearly-contemporary elements to it so to establish a coherent visual and functional framework, where old and new can coexist. 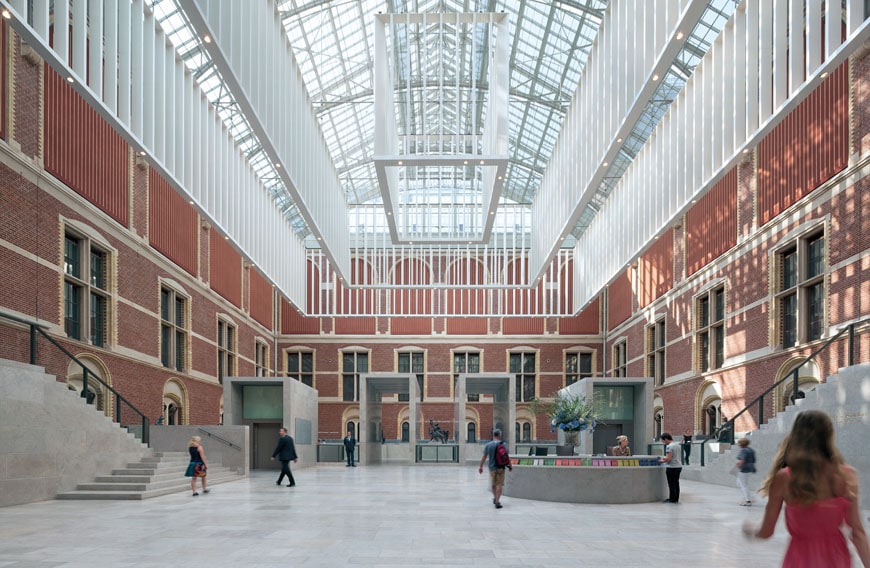 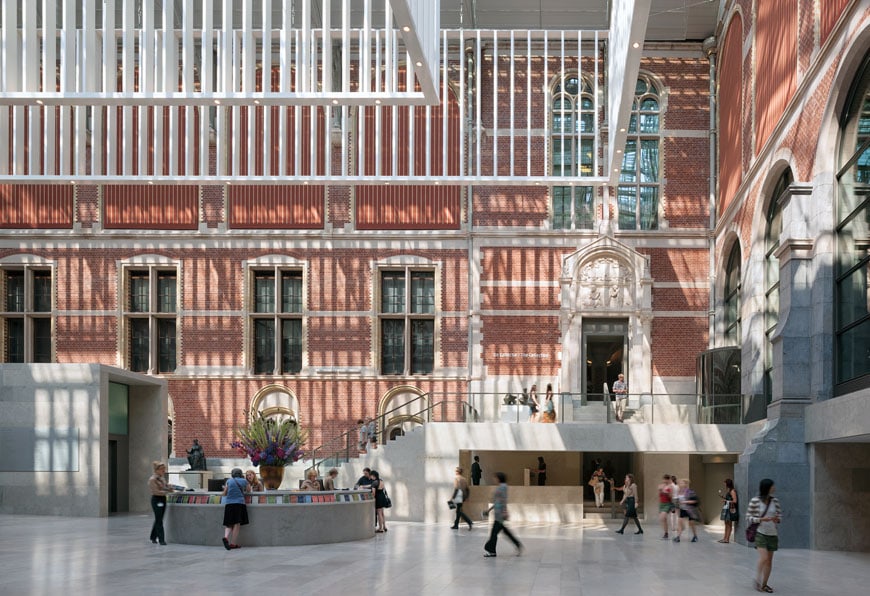 Thus the decorated 19th century brick facades are counterbalanced by airy and visually light-weight elements, like the metal and glass roof, the two giant chandeliers overlooking the atrium and the pale-gray stone floor and cladding. The chandeliers play various roles: they perceptively “rescale” the imposing height of the atrium to a more human scale, at the same time providing lighting and an acoustical correction, by reducing the, otherwise excessive, sound reverberation time within the halls.

Along with being visually excellent, the project also provides the museum with new, cutting-edge functional spaces, such as an auditorium, a shop and the “grand cafe”, as well as ticket and information desks and cloakrooms. 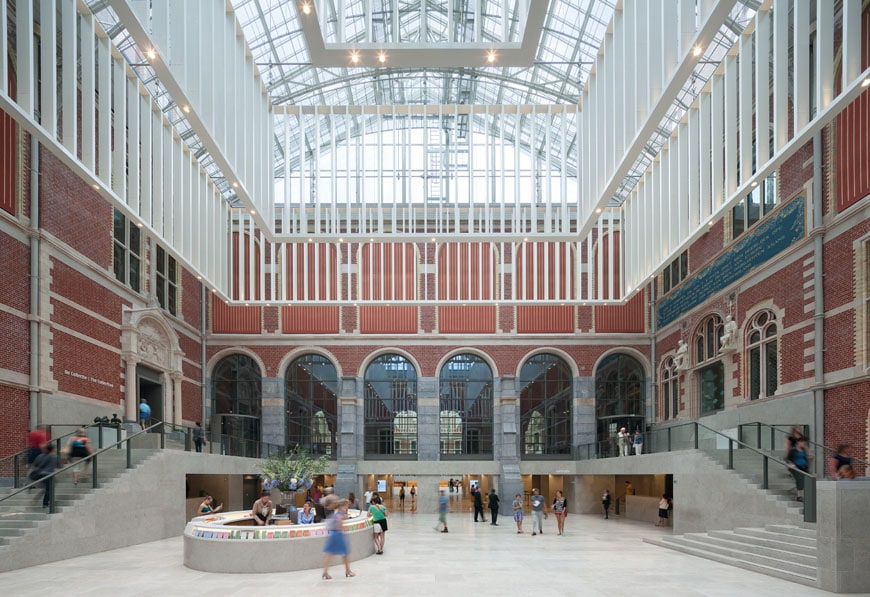 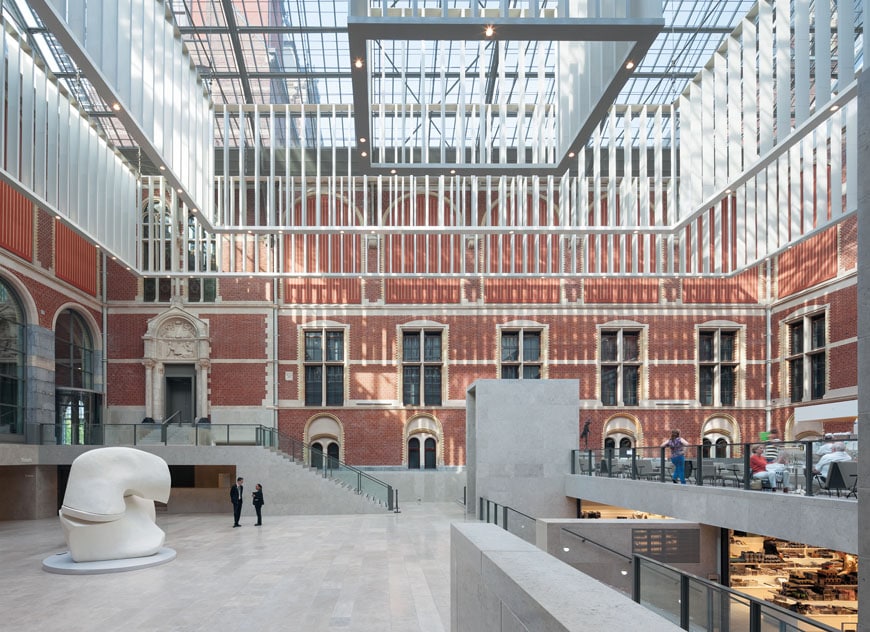 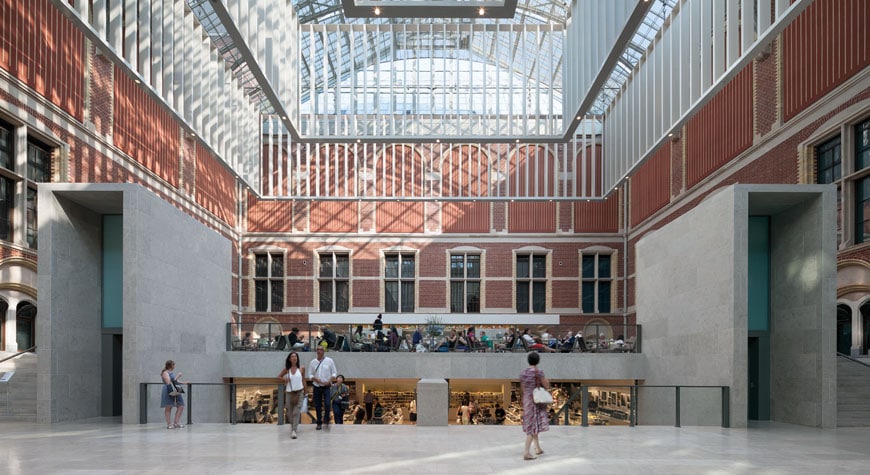 The Asian Pavilion
The Rijksmuseum is renowned as a museum devoted to Dutch history and art, nevertheless the museum also possesses a notable collection of Asian art, with Chinese, Indian, Indonesian, Japanese, Vietnamese and Thai pieces, dating from 2000 BC to present day. Due to their nature, to display such objects inside the museum main galleries has always been difficult, both scientifically and visually; therefore the renovation project envisaged the creation of a new, specific and independent, building for this collection: the Asian Pavilion. 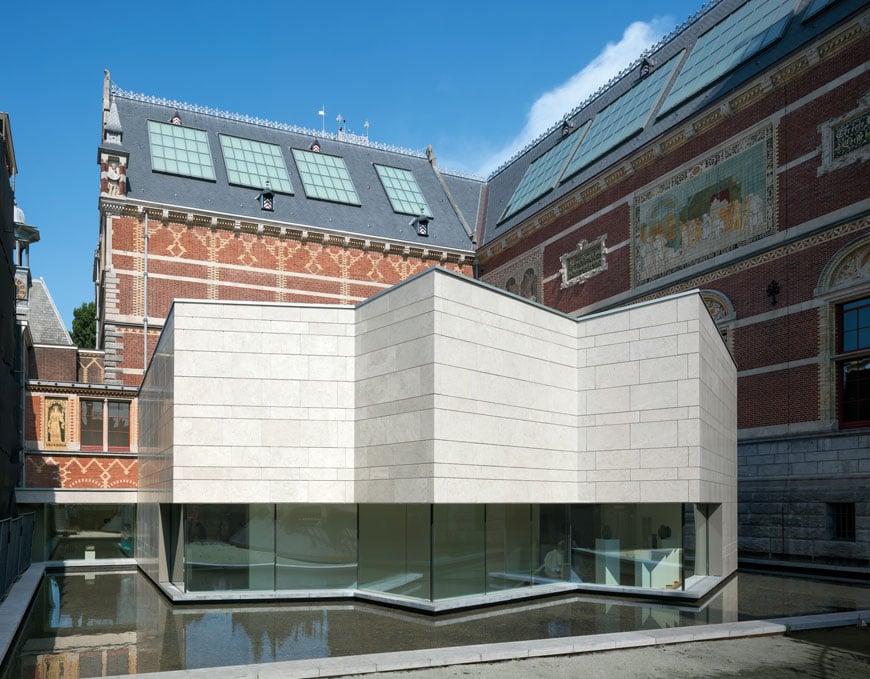 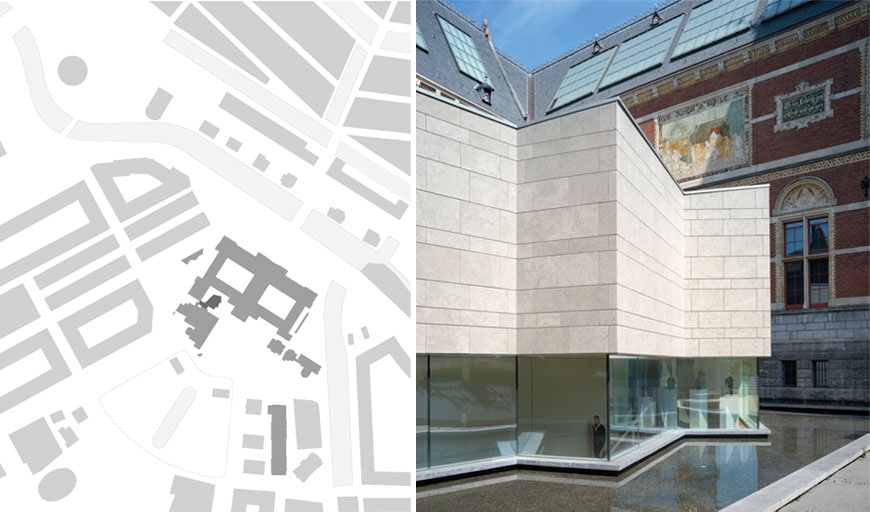 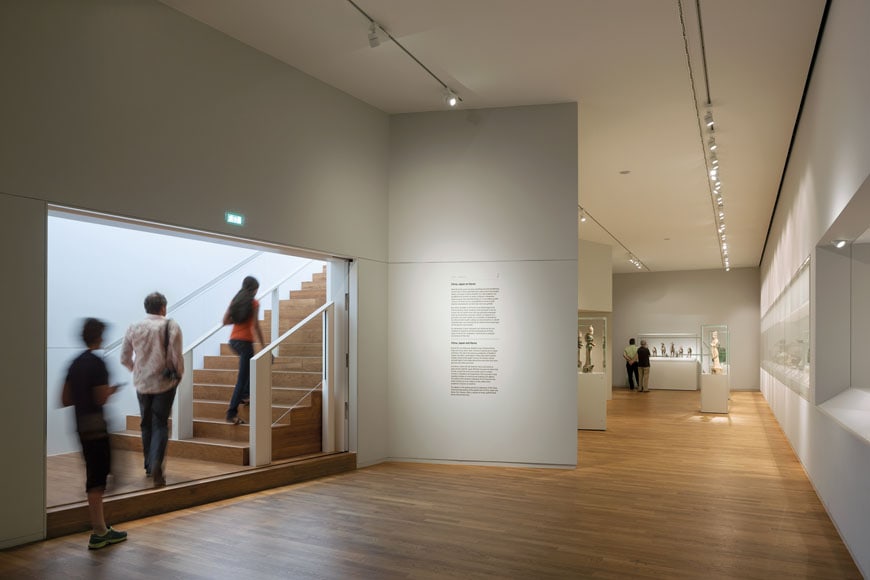 The pavilion, again designed by Cruz Y Ortiz, is a small two-story building, with a total floor area of about 1,000 square meters, located within the museum garden, south of the main building and connected to it by an underground passageway. 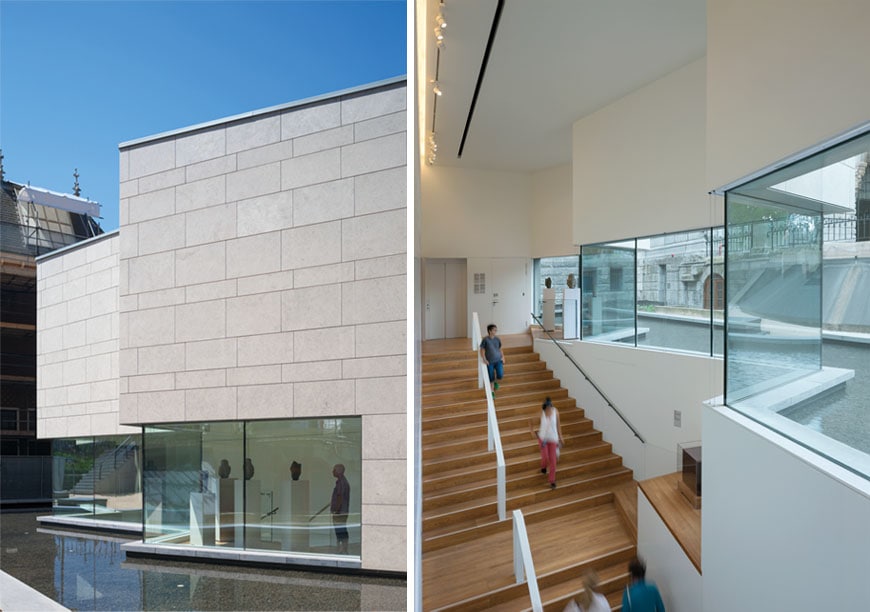 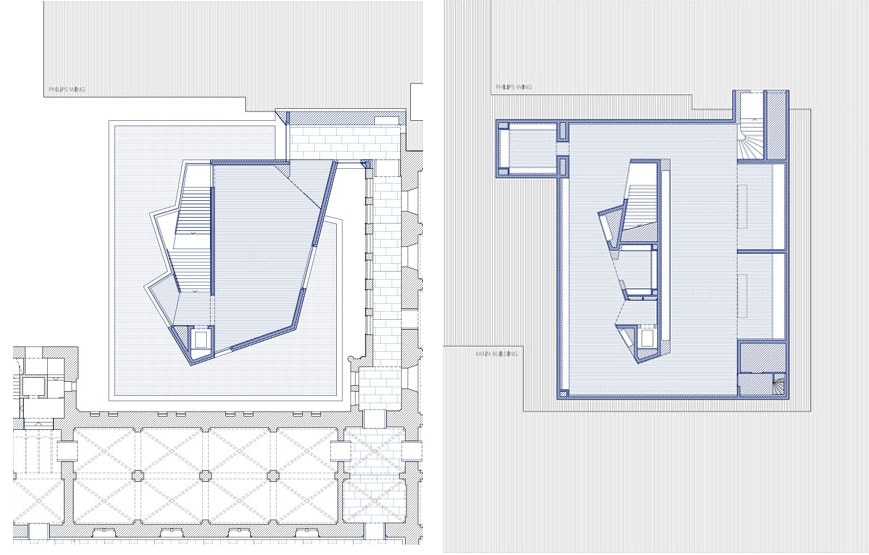 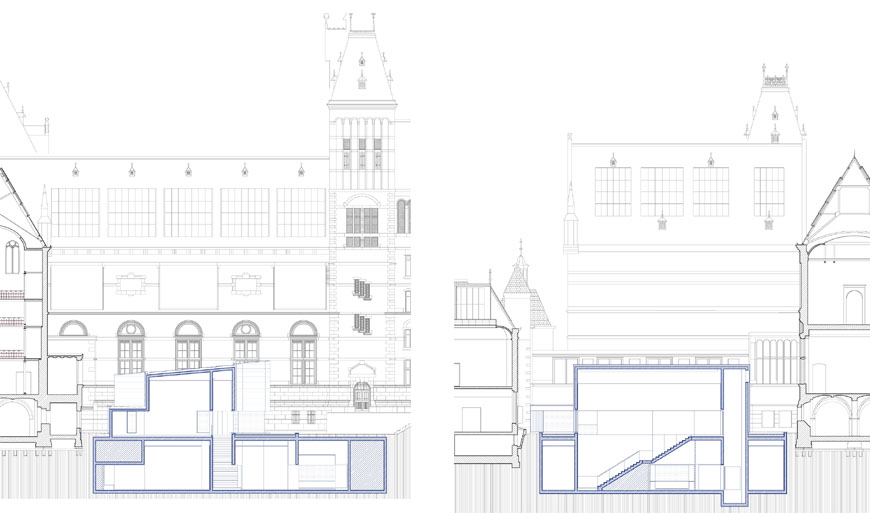 The project successfully resolves the, potentially cumbersome, relationship between the new building and the adjacent monumental complex by adopting an articulated shape topped by a sloped roof, and materials, for example it is clad with the same pale stone adopted for the Atrium interiors, that help identifying it as a modern intervention; an impression further reinforced by the pool that encircles the pavilion and makes it look like as “an independent piece in the garden” (cited from Cruz y Ortiz project description). 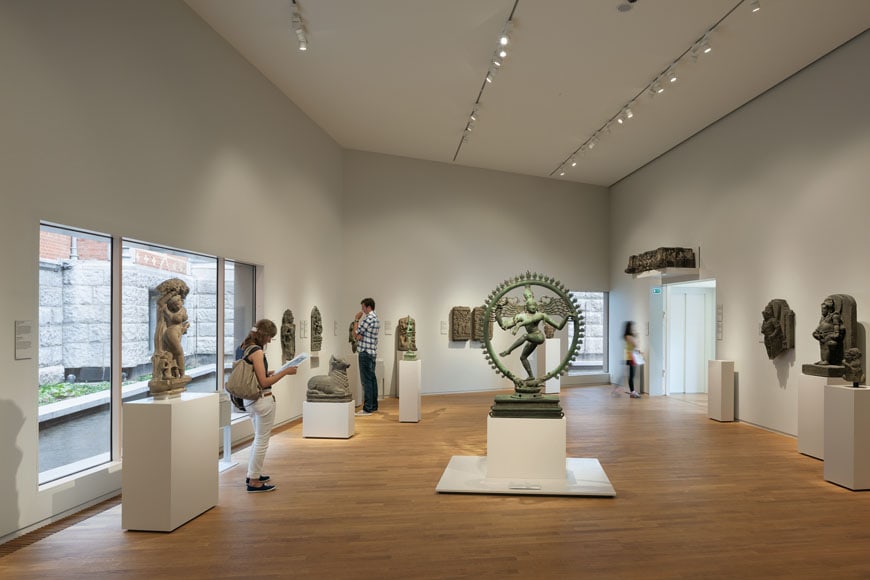 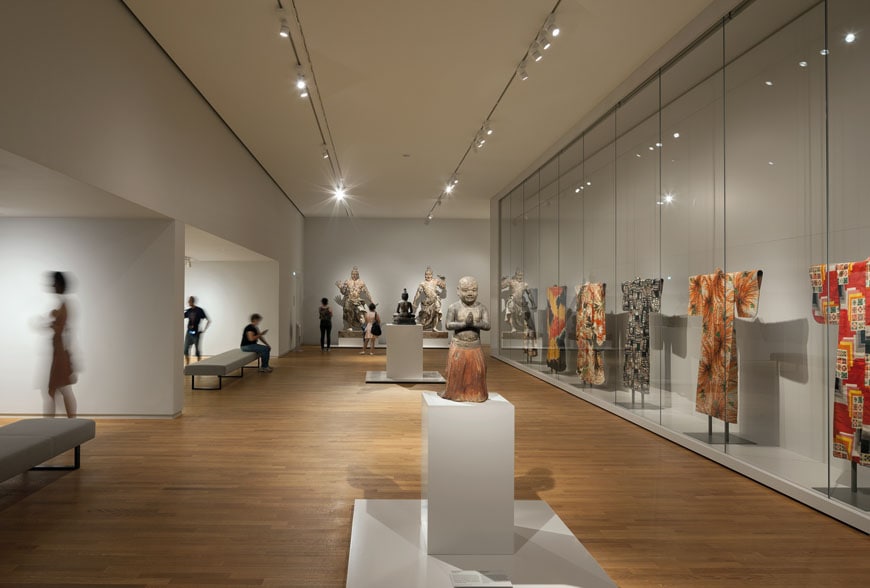 The project for new Rijksmuseum has been selected as one of the 40 finalists at the Mies arch European Union Prize for Contemporary Architecture, 2105.

The architecture of the new Rijksmuseum – go to Part 2

sponsored links
Where is this? Find it through MYMUSEM search
Rijksmuseum