The Nelson-Atkins Museum of Art is a museum of fine and applied arts in Kansas City, Missouri. Established in 1933 and renowned for its collections of European, American and Asian art, the museum was expanded in 2007 with the iconic Bloch Building, designed by Steven Holl. Architects.

The museum originates from two separate grants, one by publisher William Rockhill Nelson (1841-1915) and another by school teacher and heiress Mary McAfee Atkins (1836-1911), both aimed to establish a new museum of art in Kansas City.
Instead of creating two separate institutions, the trustees decided to join forces and found a single major museum, initially named The William Rockhill Nelson Gallery of Art and the Mary Atkins Museum of Fine Arts.
The museum’s imposing neoclassical-style building, designed by Wight & Wight Architects, opened to the public on December 1, 1933.

Like many other American museums founded in the same period, the Nelson-Atkins is an encyclopedic art museum whose collections spans over 4000 years, from ancient to contemporary art. Furthermore, the museum’s collections encompass various geographical areas – Far and Near East, Africa, Europe, and the Americas – and art fields – including painting, sculpture, photography, archaeology, architecture, design, and decorative arts. 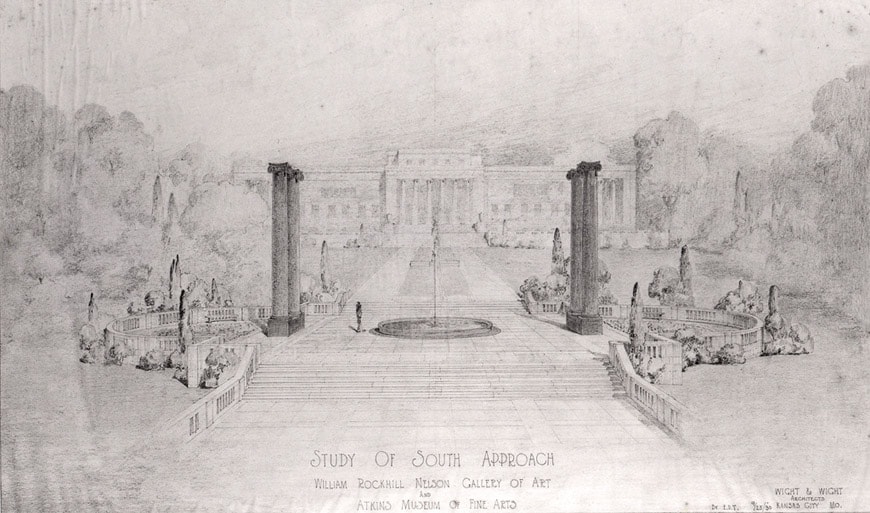 Wight & Wight Architects, study for the southern facade and the landscape design of the “William Rockhill Nelson Gallery of Art and the Mary Atkins Museum of Fine Arts” building, September 1930; image courtesy of The Nelson-Atkins Museum of Art 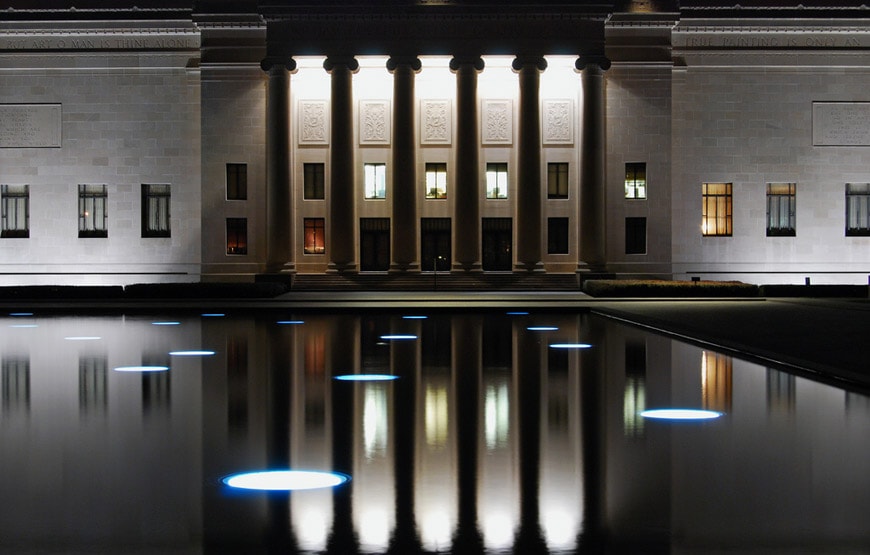 North facade of the historical building of the Nelson-Atkins Museum, designed by Wight & Wight Architects in the early ’30s; photo: Jeff Fudge 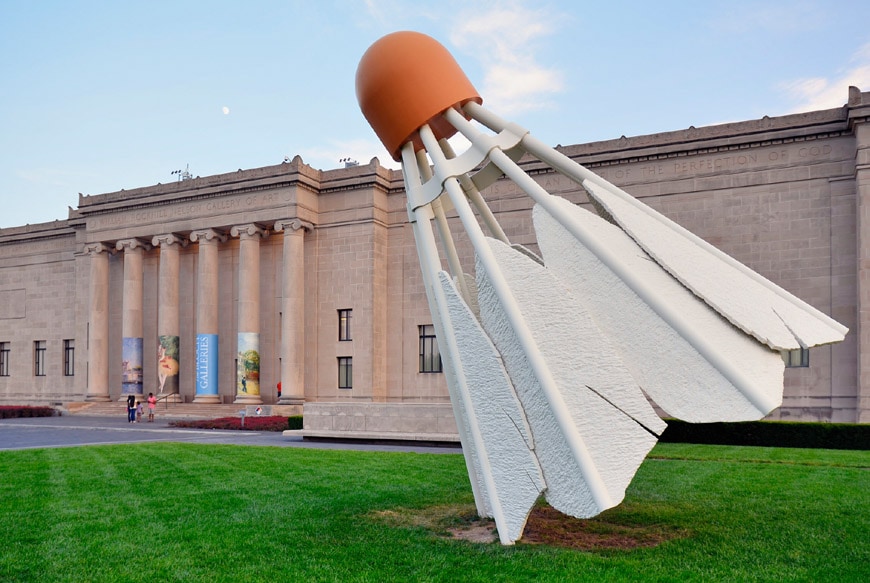 In 2007, a 165,000-square-foot (15,330-square-meter) addition to the Nelson-Atkins museum, called Bloch Building, was completed after a design by acclaimed American architect Steven Holl.
Rather than designing a single, large expansion, Holl conceived five interconnected buildings, clad in translucent glass, creating a 850-foot-long sequence of boxes whose overall profile follows that of the terrain they sit onto; a sinuous path, which borders the museum’s sculpture park on its eastern edge, connects one building to the next.
Holl called such boxes lenses because the convex shape of their glass-clad southern facades was conceived to reflect and focus sunlight on the northern facade of the nearest box, thus maximizing and somewhat “amplifying” natural lighting in the exhibition galleries.

The first box contains the museum’s lobby, a library, and a bookshop, and gives access to both the historic building and the new wing.
On five levels, the other four pavilions accommodate the museum’s galleries dedicated to modern and contemporary art, photography and African art, and special exhibitions. Furthermore, a small sculpture court with works by Isamu Noguchi is located between the two southern boxes.
Holl also designed a new entry plaza which features a square water mirror – which reflects the old building’s northern and the new expansion’s western facades – as well a monumental sculpture from the series Shuttlecocks by Claes Oldenburg & Coosje van Bruggen (three others are installed in the museum’s park) which has become a sort of unofficial symbol of the Nelson-Atkins.
Another work, the sculpture One Sun / 34 Moons commissioned by the museum to American artist Walter De Maria, stands in the middle of the reflecting pool. An underground car park is located just beneath the entrance plaza. 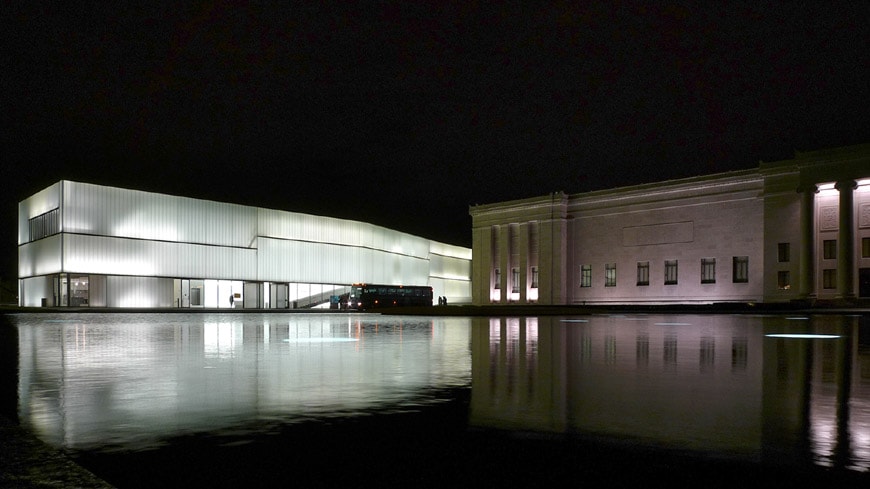 The historical building (right) and the entrance pavilion of the Steven Holl expansion (left); photo: FHKE 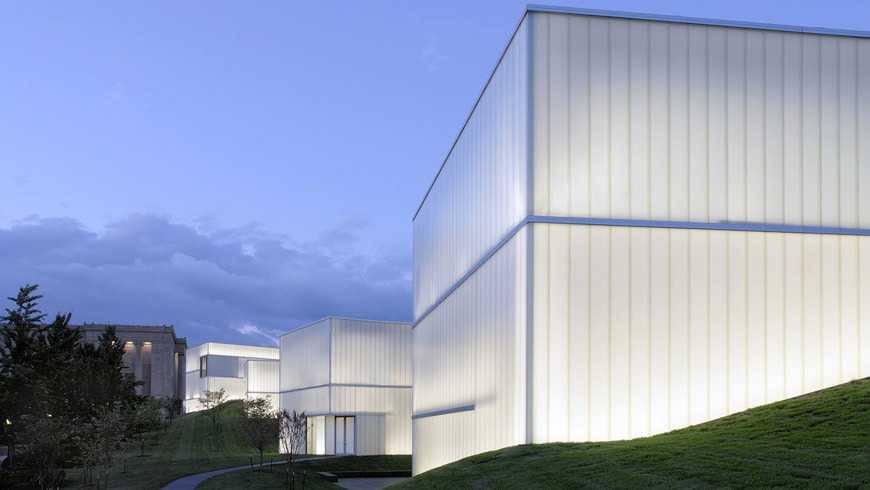 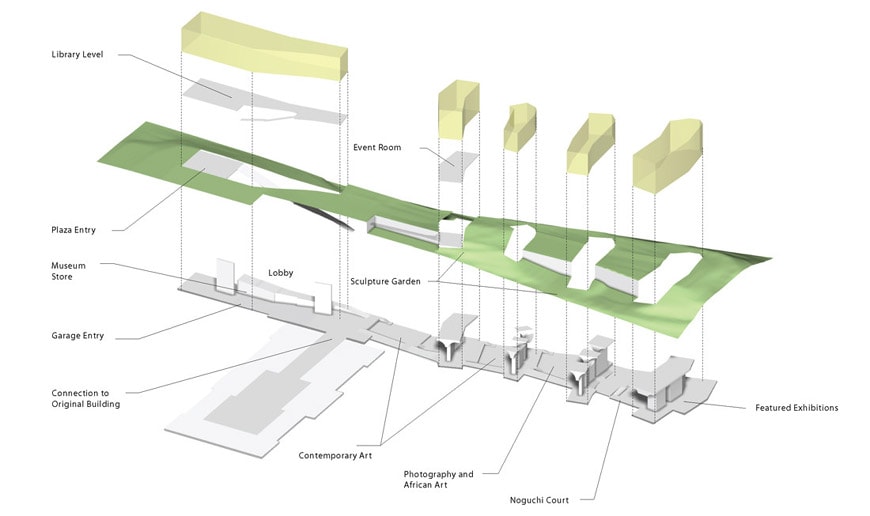 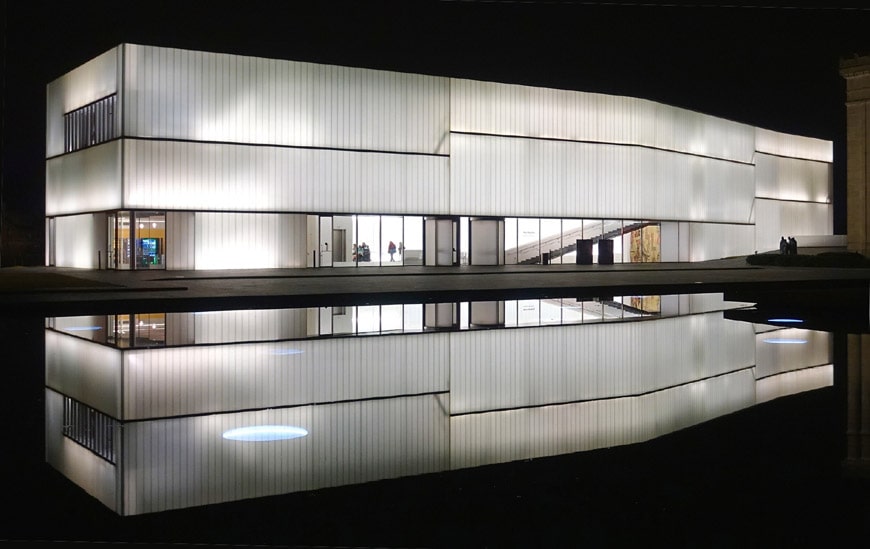 As mentioned, the collection of the Nelson-Atkins Museum of Art is quite diverse and covers different historical periods, geographical areas, and art techniques.
Overall, the 35,000-piece collection of the museum is divided into thirteen thematic sections, dedicated to the art of Africa, America, Indian America, China, Europe, Japan, and South and Southeast Asia; to Modern, and Contemporary art; to Architecture, design and decorative arts; to Photography; and to Ancient Art – with artifacts from Ancient Egypt, Greece, Italy, North Africa, and the Near East.
The thirteenth section is the 22-acre Donald J. Hall sculpture park in which works by contemporary artists such as Henry Moore, Mark Di Suvero, Alexander Calder, and Tony Cragg, among others.

The sculpture collection comprises works dating from antiquity to the present, from remarkable ancient-Egyptian pieces to modern and contemporary works by artists such as Constantin Brancusi, Alberto Giacometti, Isamu Noguchi, Donald Judd, and Anish Kapoor.

Objects in the design and decorative art collection include American and European furniture, pottery, arms and armor, glass objects and silvers dating from the Middle Ages to the 21st century. 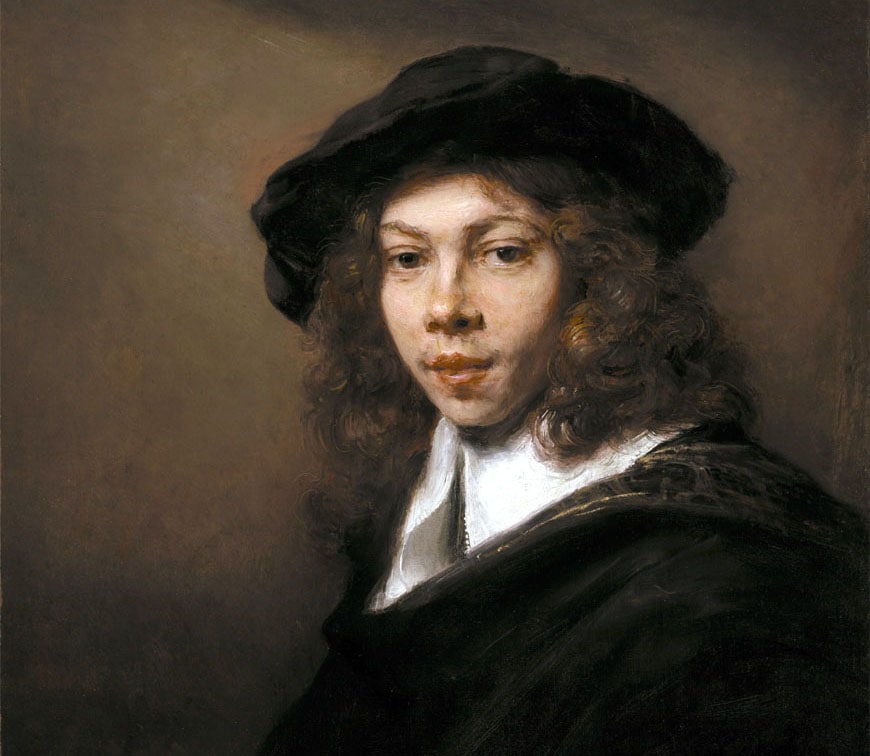 Rembrandt van Rijn, Young Man in a Black Beret, 1666, oil on canvas, photo courtesy of the Nelson-Atkins Museum of Art 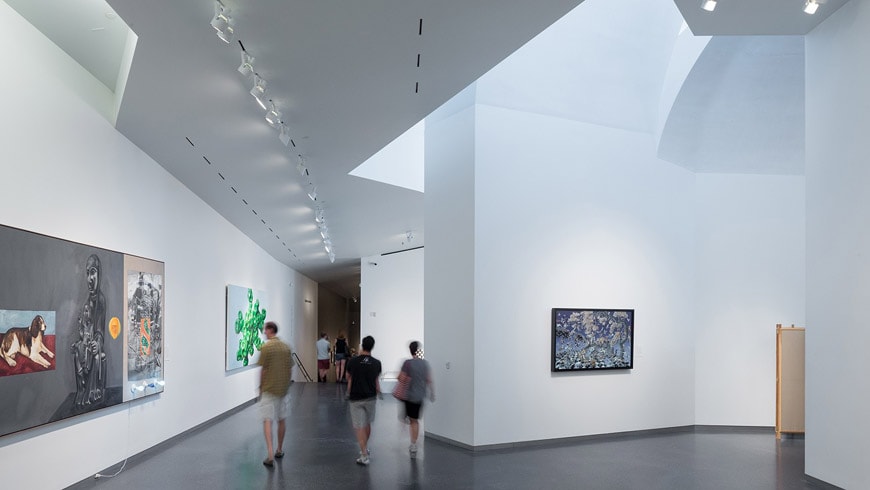 A view of a modern and contemporary art gallery in the Bloch Building; photo © Iwan Baan

The program of the Nelson-Atkins Museum of Art comprises special exhibitions, learning classes, art workshops, film screenings, live performances and concerts, and family events.
The museum’s building, fully accessible to physically-impaired people except for the sculpture garden and the Rozzelle Court restaurant, includes a 500-seat cinema-auditorium, a learning center, an art reference library, a cafe-restaurant, and a shop. 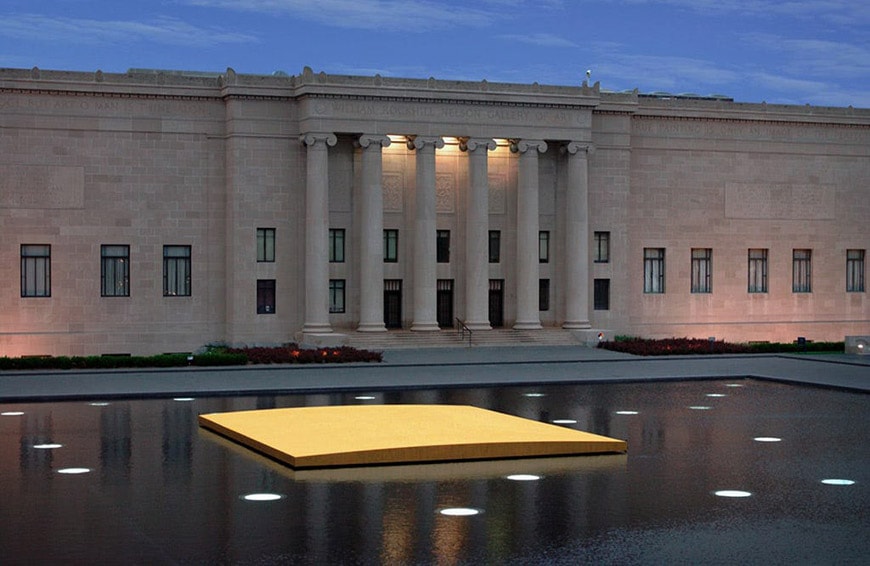 The water mirror in the entrance plaza with the work “One Sun / 34 Moons” by Walter De Maria; photo courtesy of The Nelson-Atkins Museum of Art 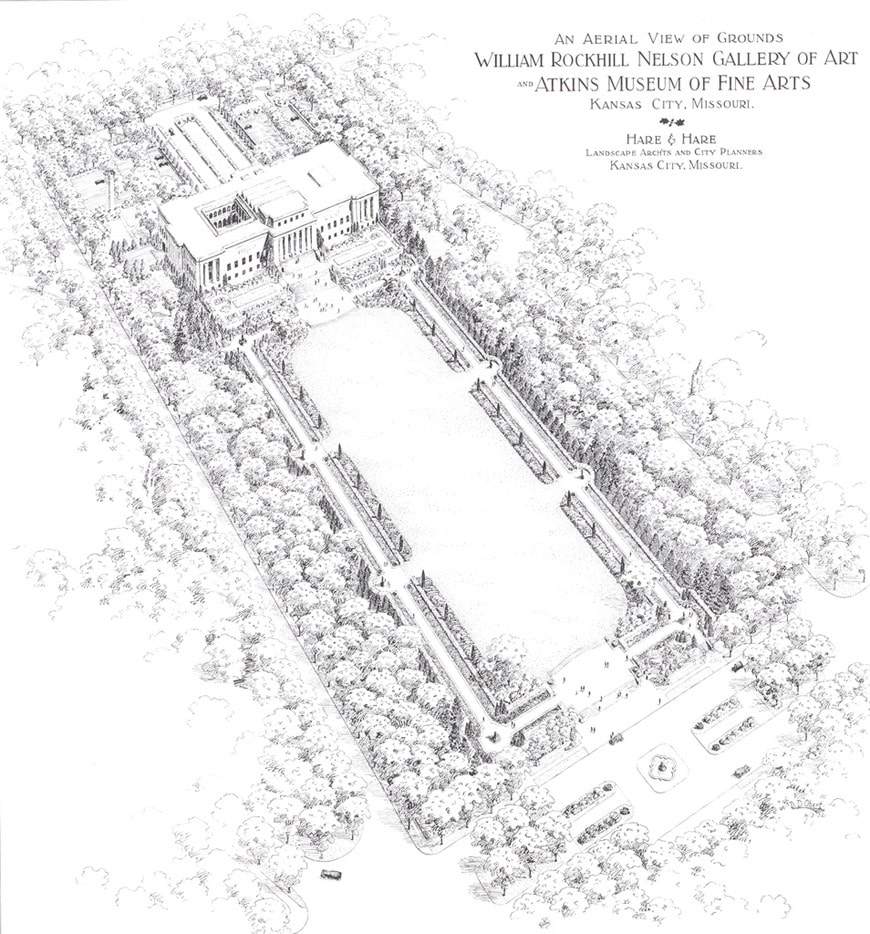 A bird’s eye view of the museum’s historic building and park, drawing by Hare & Hare landscape architects, ca. 1930; image courtesy of The Nelson-Atkins Museum of Art 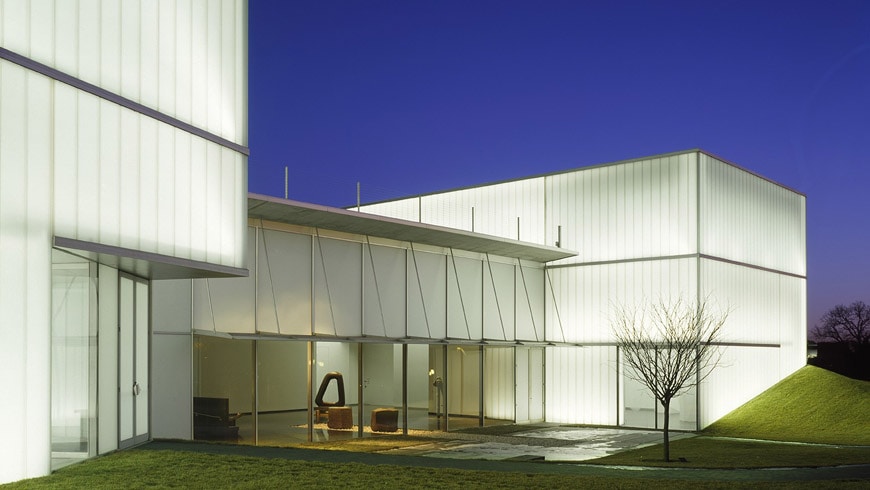 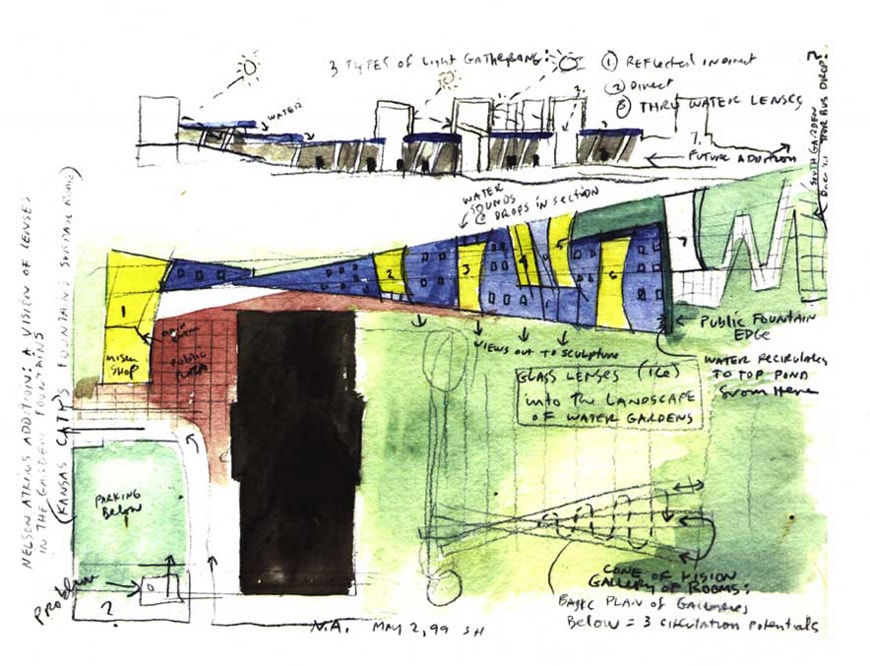 Steven Holl, preliminary sketch of the 2007 expansion, image courtesy of the Nelson-Atkins Museum of Art 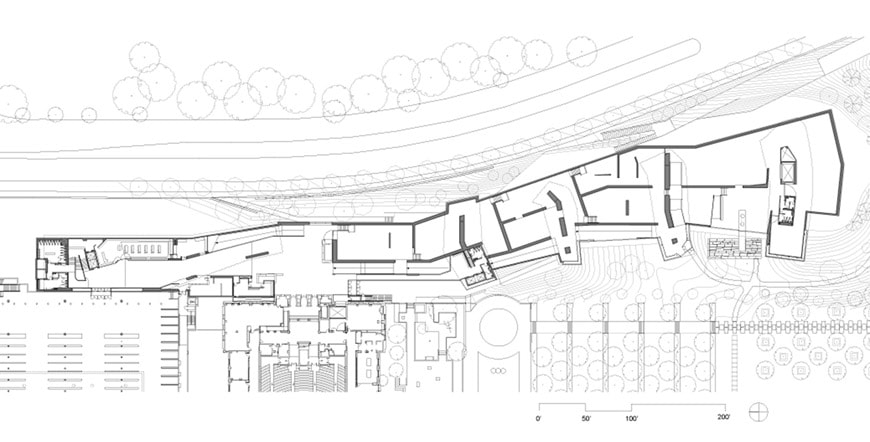 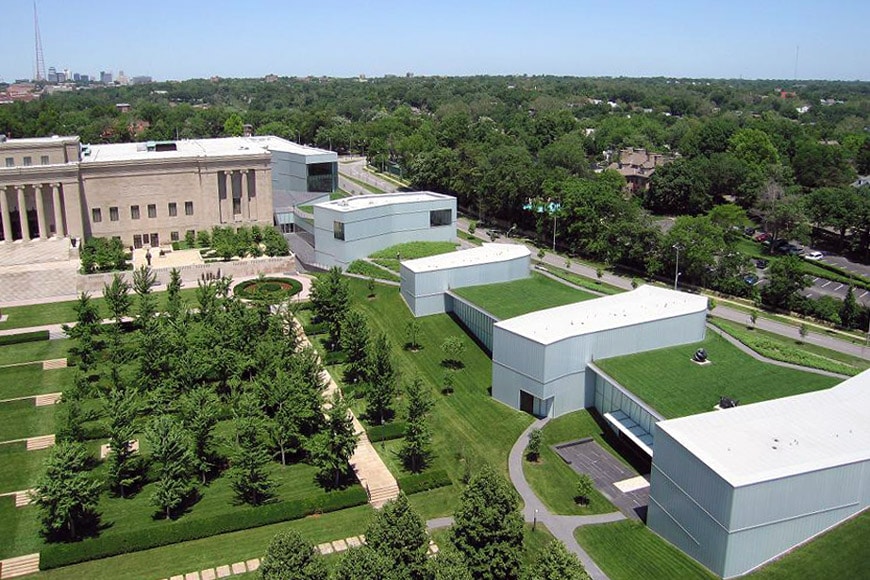 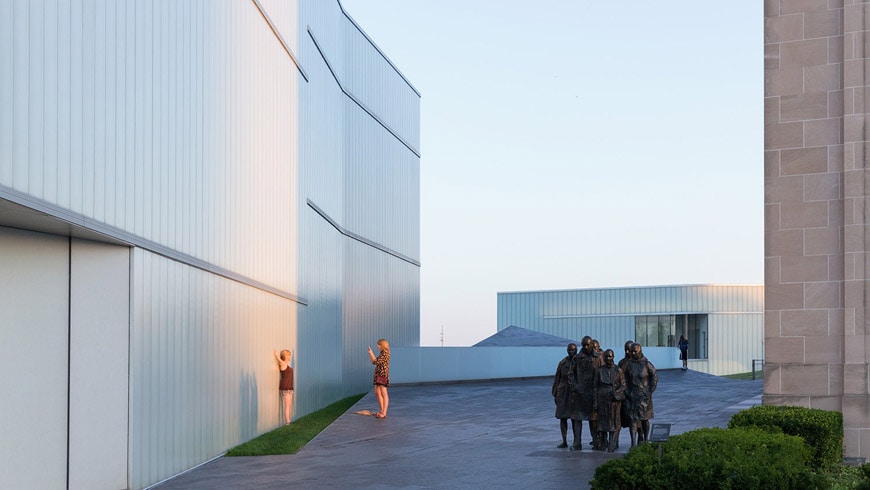 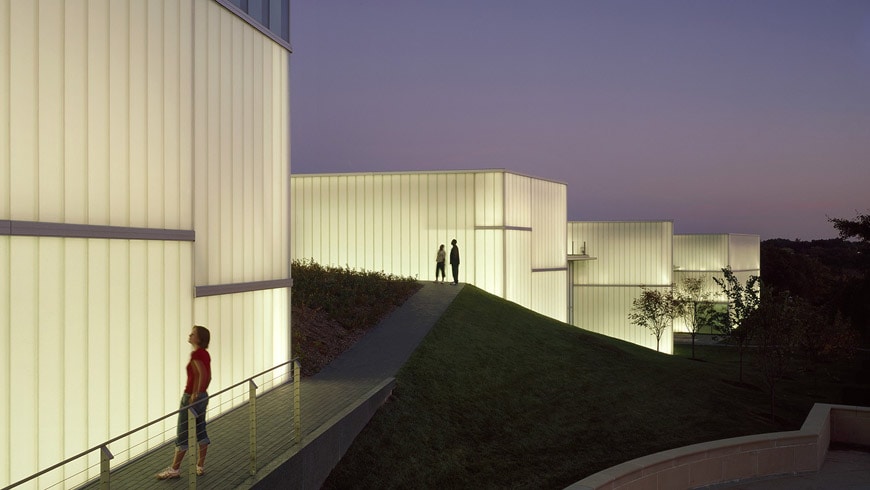 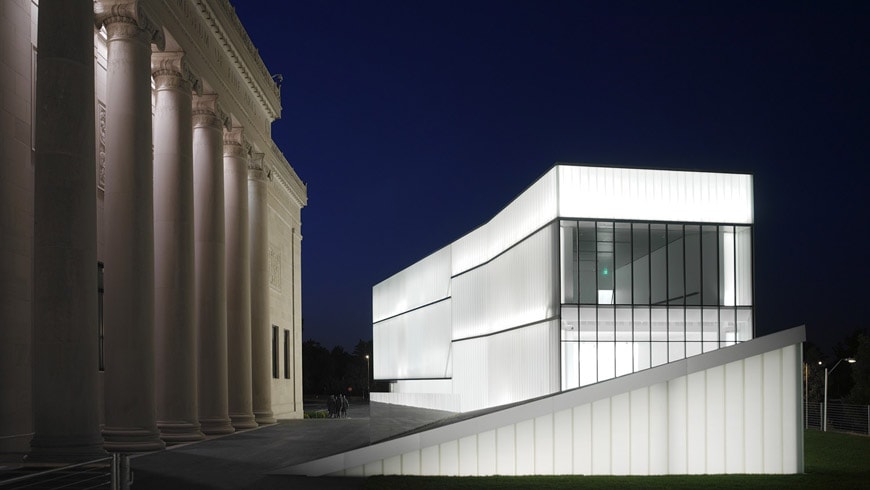 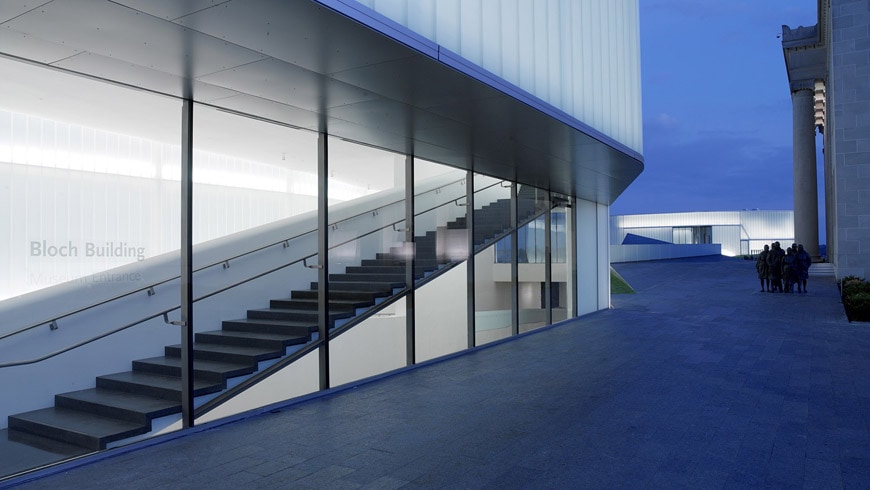 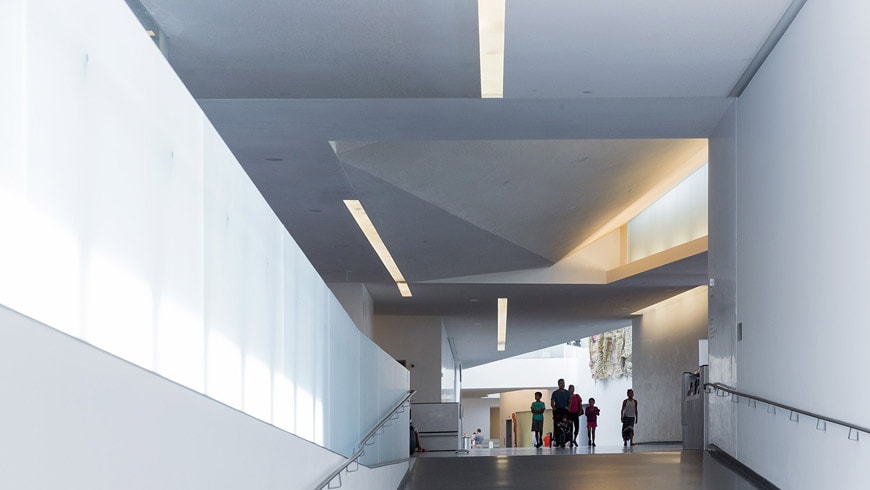 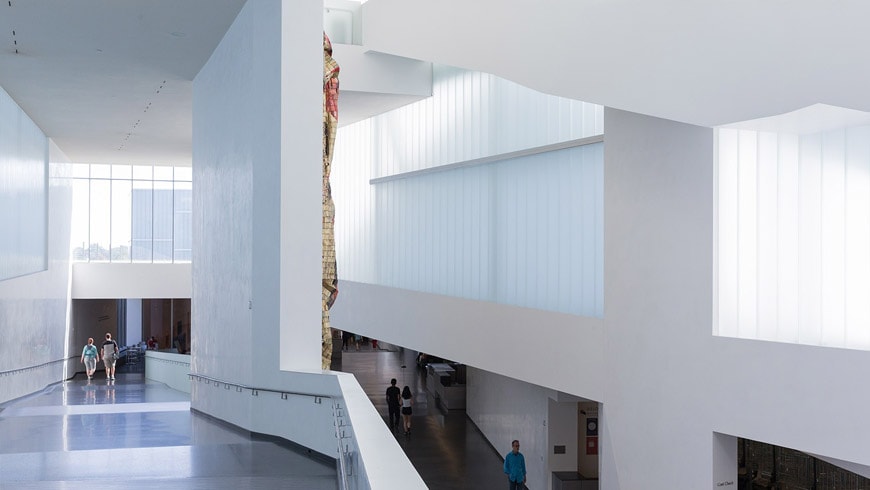 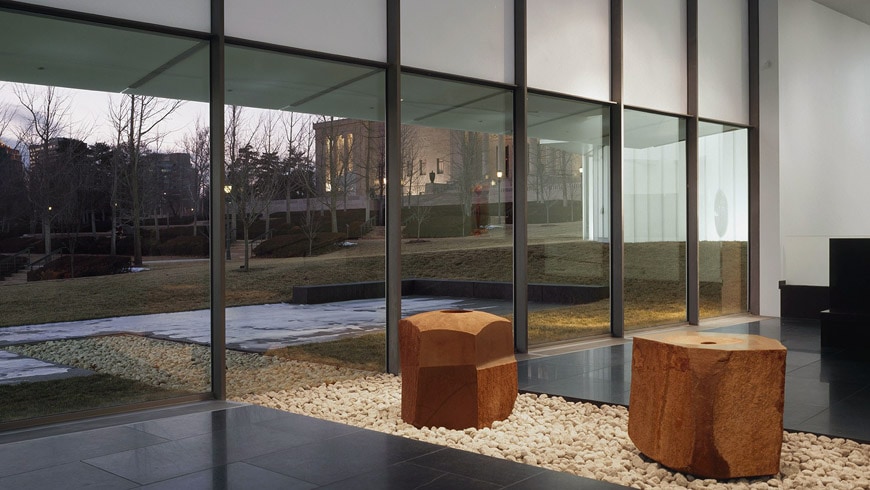 Interior view of (top to bottom) the museum’s lobby, of the “meandering path”, one of the contemporary art exhibition rooms, and the special exhibition gallery with the Isamu Noguchi Court;  photos © Roland Halbe, courtesy of Steven Holl Architects 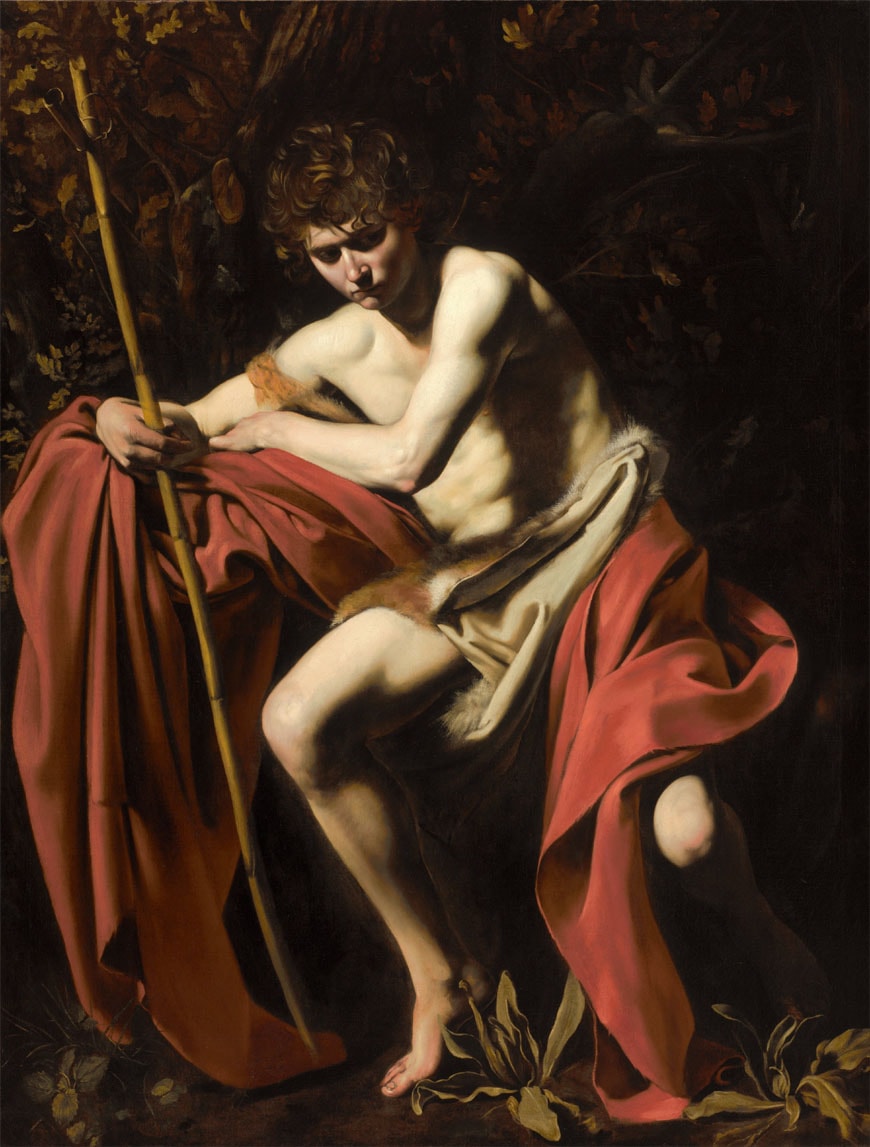 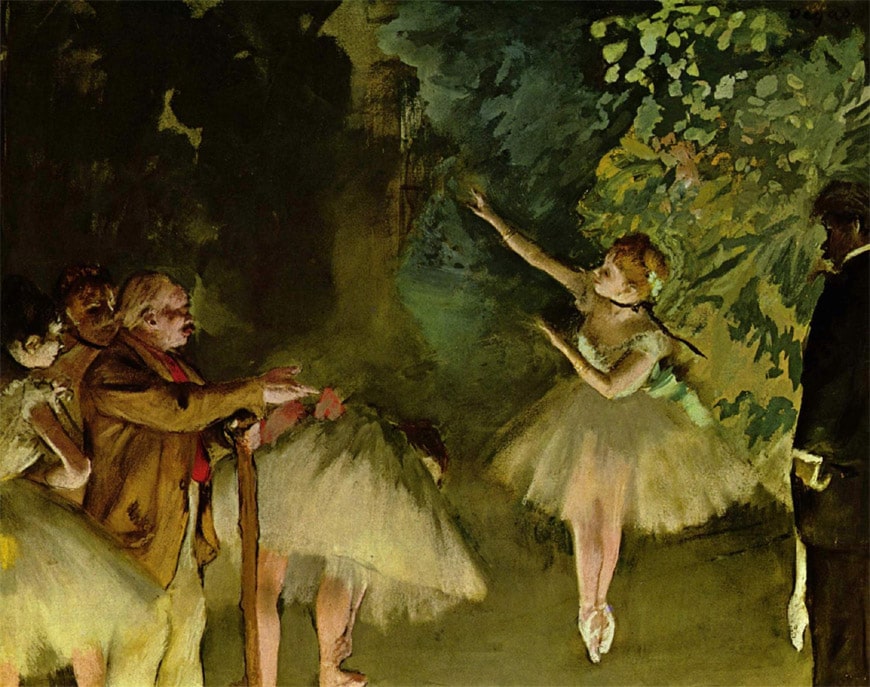 Edgar Degas, Rehearsal of the Ballet, ca.1876. Gouache and pastel over monotype on paper; photo courtesy of The Nelson-Atkins Museum of Art 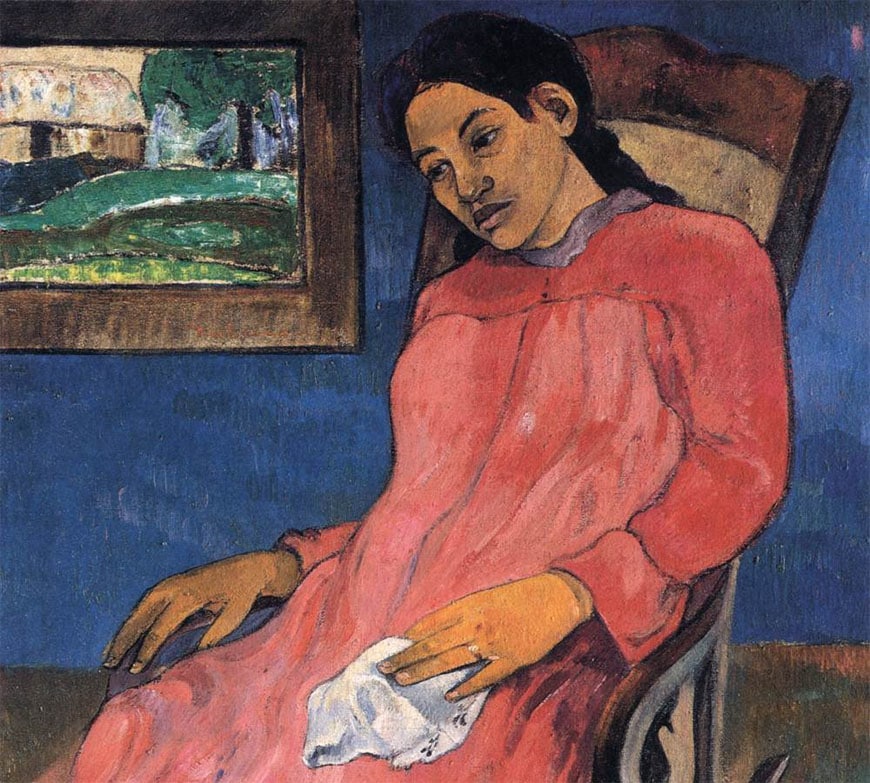 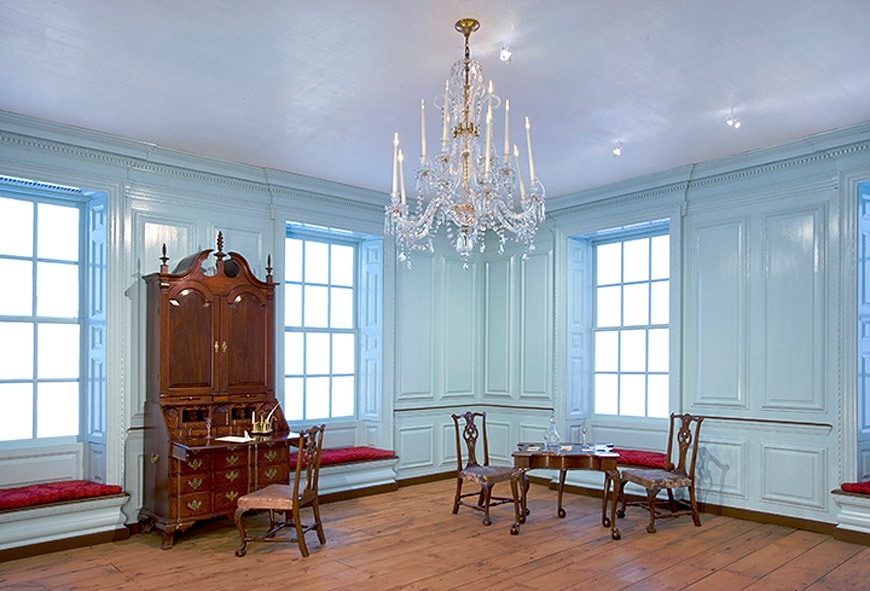