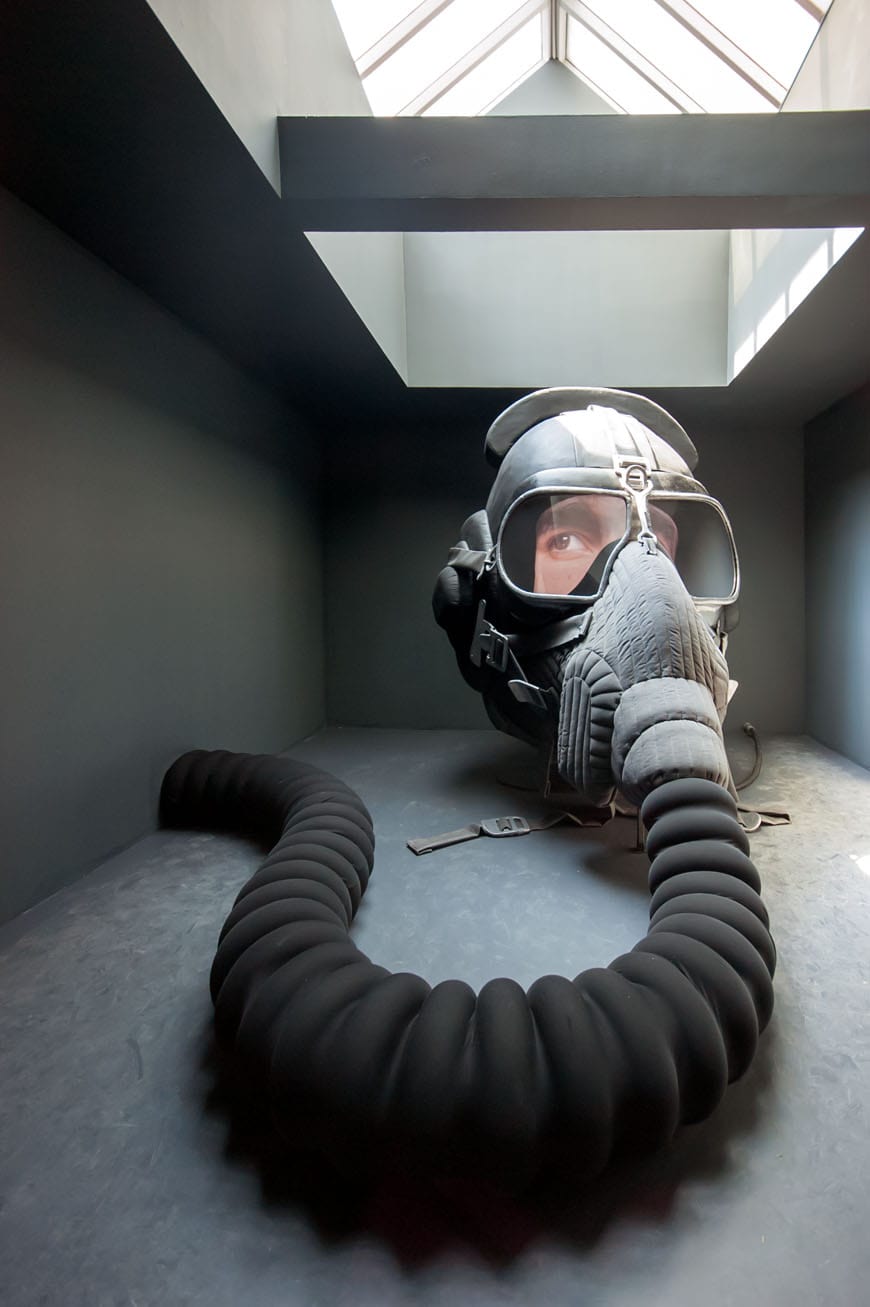 The Russian exhibition presents an ambitious work, entitled “The Green Pavilion”, through which Irina Nakhova (b. 1955) interacts with the architecture of the pavilion, designed in 1913 by Aleksey Shchusev, also author of the Lenin’s Mausoleum in Moscow.

Taking the cue from the “total installations” by Ilya Kabakov, and pulling further the concept expressed in her own “Rooms” installations of the 1980s, Nakhova has set up five spaces, where a complex interaction between art, architecture and spectator’s perception develops in surprising ways, so exploiting the original concept by Shchusev, who did not intend the pavilion as a mere container, but as an active support to artists’ creativity instead. 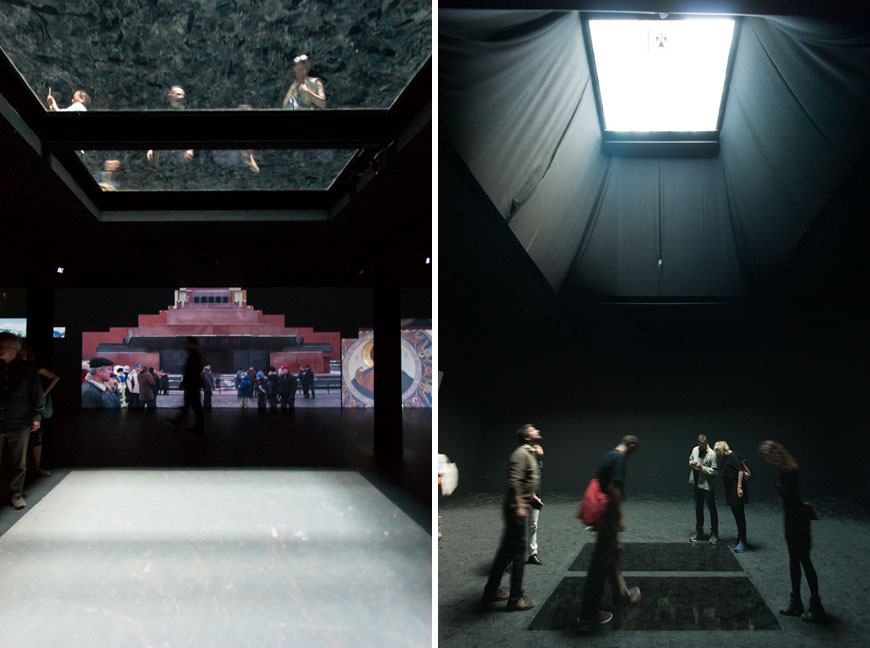 Thus, in her “Green Pavilion” Nakhova makes a resolute use of “Supremastist” colors, green, bright red and black; an inventive usage of videos, like for the impressive “pilot’s head” in the room 1; and a surprising manipulation of the pavilion architecture – a cadenced opening of a skylight to establish a rhythmical connection between the different levels of the pavilion and at the same time between visitors, for example -, to create a truly immersive, almost physical, experience for the public. 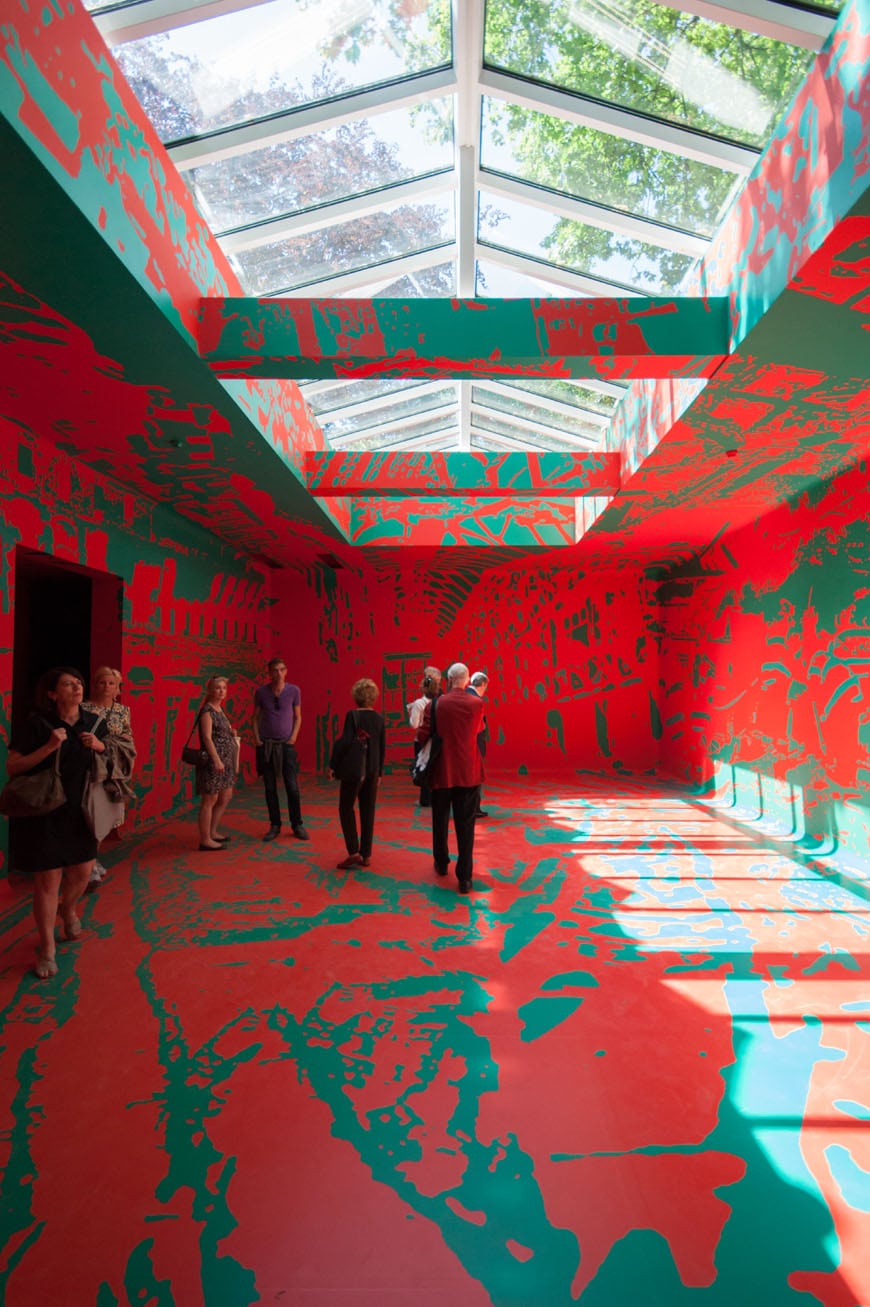 Fabrik, the title of the exhibition of Germany at the 56th Biennale, alludes to a factory where, rather that goods, images are produced. Therefore, the six works exposed within the pavilion, adopt the metaphor of images to express the interconnections and the circulation of people, ideas and goods in the contemporary, globalized and digital, world.

The works presented are: Giro and Lucarne by Olaf Nicolai; the Citizen by Tobias Zielony; Out on the street and Draw it like this by Jasmina Metwaly and Philip Rizk; Factory of the Sun by Hito Steyerl. 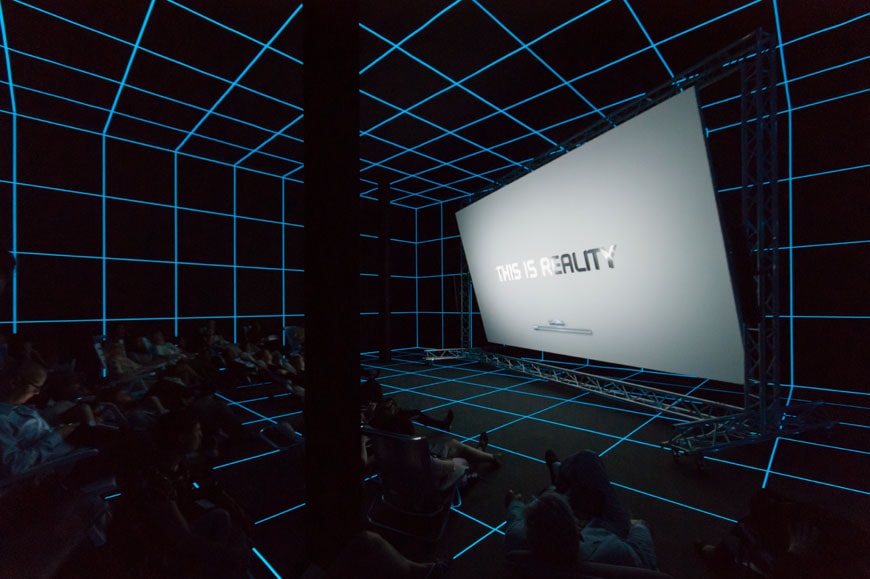 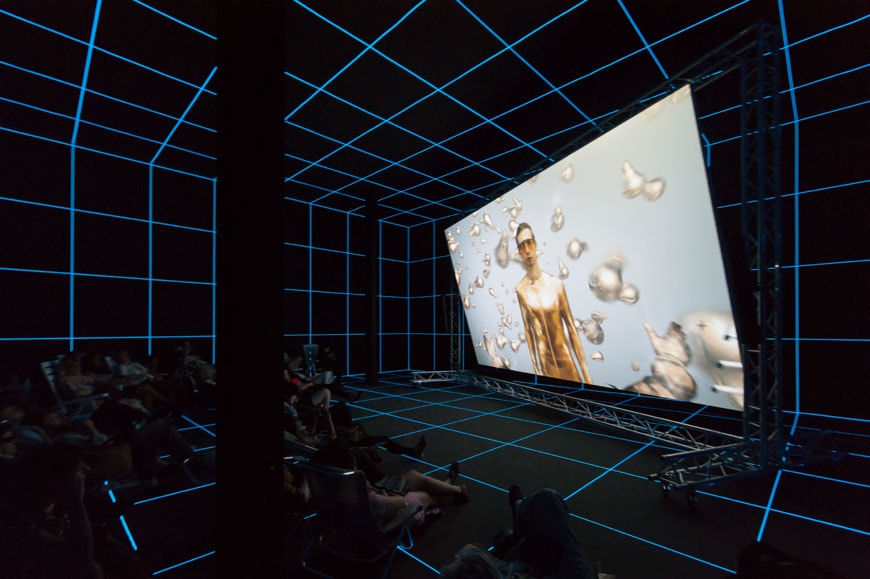 The video installation Factory of the Sun by Hito Steyerl adopts the metaphors of a computer game and of a motion capture studio to represent concepts like reality, freedom, immateriality and information in the contemporary society. Photo © Inexhibit, 2015 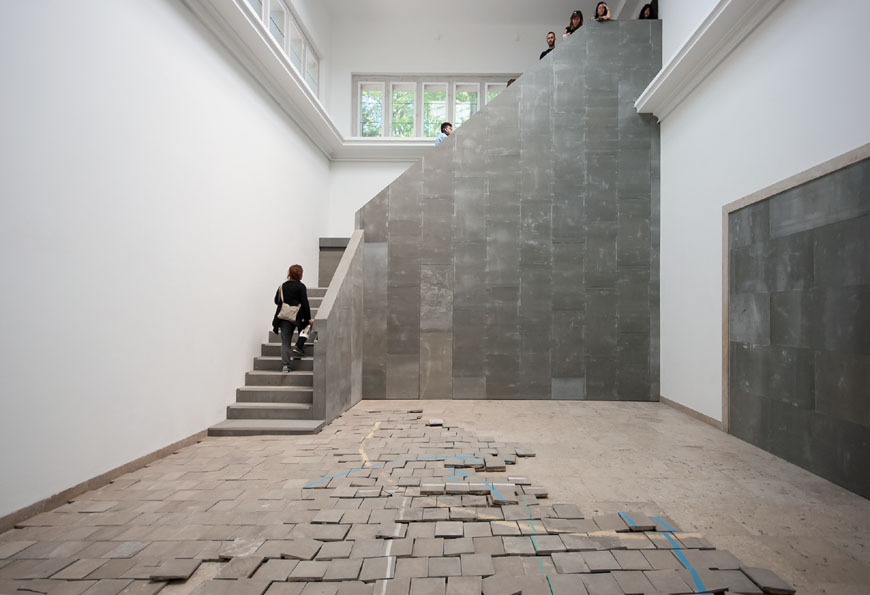 Abeel, Abeen, Aben, Afriam, Afrim, Afristil, Albatom…. are the ingredients of Our Product, imaginary chemical and bio-tech products, created by an hyper-advanced industry to convey sensations, vital functions, even relief to our pains. Their scientific and industrial names are endlessly declaimed, like in a mantra, inside the Swiss pavilion, their appearance is represented by infinite combinations of pink, green and blue. Through her new, personal scientific lexicon, Pamela Rosenkranz communicates us that our physical and mental configuration is being changed. 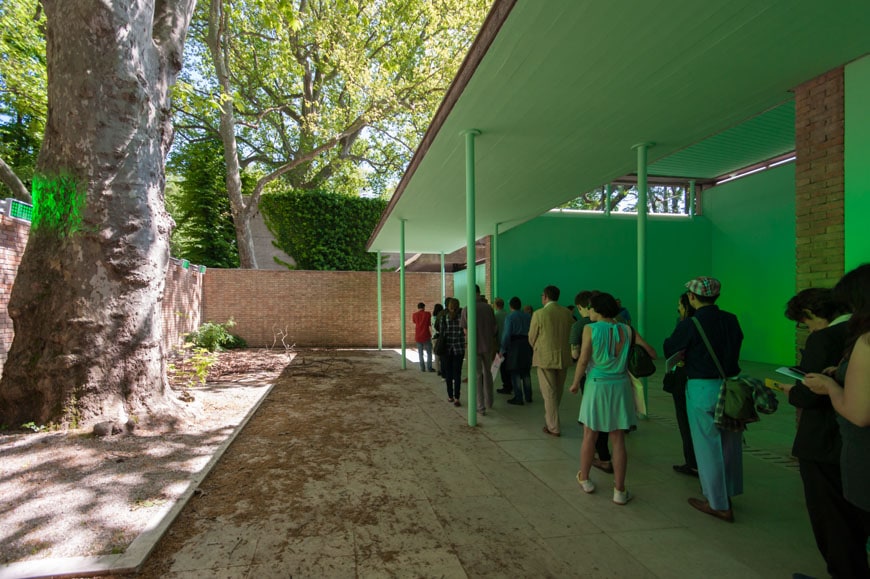 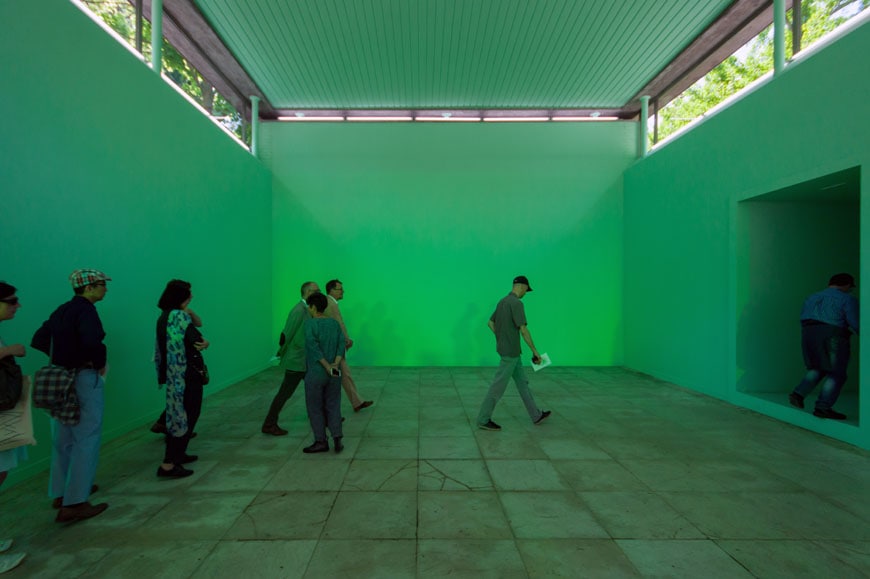 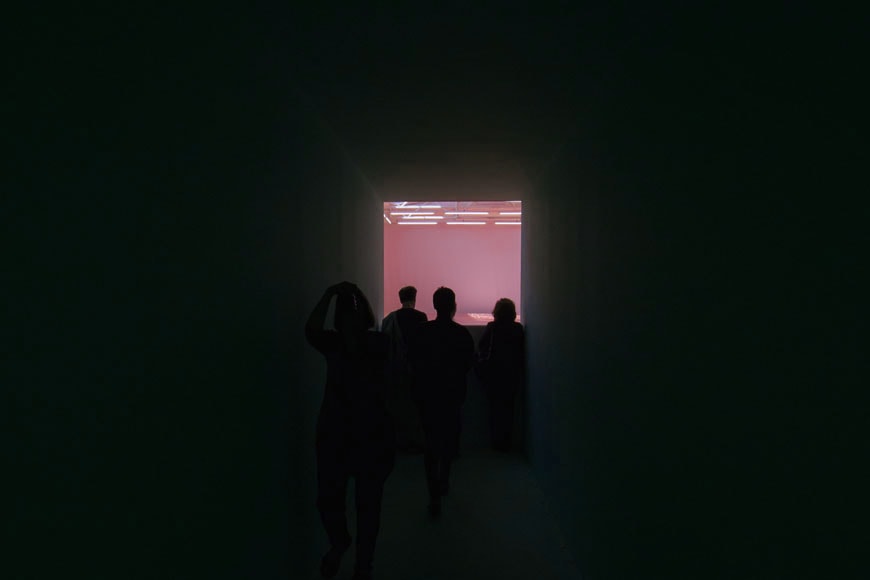 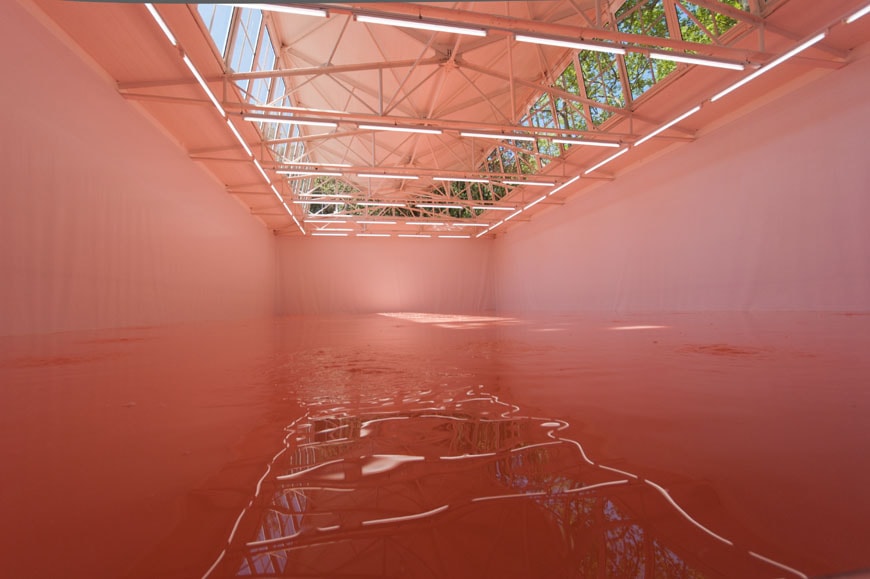 All photos © Inexhibit, 2015, all rights reserved