Home » Art » The Shit Museum celebrates the cycle of Matter

The Shit Museum celebrates the cycle of Matter 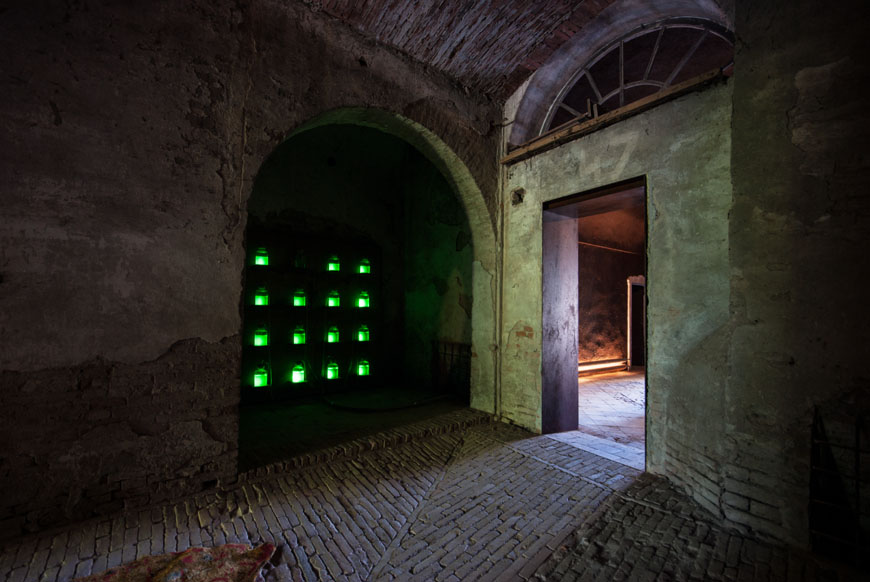 The installation  “Methane biolight” at The Shit Museum; photo © Inexhibit, 2015

Italy | The Shit Museum celebrates the eternal cycle of Matter

Frankly, after visiting The Shit Museum, we deem that its name, though catching, is somehow too narrow.
Indeed, the story that this museum and its site are telling us is utterly articulate. It expresses a very original vision of life and work, promoting an ideal of balance between man and environment and showing us that every human activity makes more sense when it is part of a virtuous cycle.

To cut a long story short, it tells us that byres and and barns will always be byres and barns, but better ones if conceived as components of an harmonic whole.
Moreover, it definitely demonstrates that art could be a part of everyone’s daily life, rather than an elitist experience for the few.

Let’s go step by step. Castelbosco is a farm, located in the village of Gragnano Trebbiense near the northern Italian town of Piacenza, producing milk for Grana Padano cheese makers. Owned by the businessman and art collector Gianantonio Locatelli, it owns about 2,500 cows, which provide 30,000 liters of milk daily.
But at the same time, each day the cattle produce 100,000 kilograms of dung. Finding a way to deal with a so huge amount of “waste” has been the inspiration from which the Castelbosco’s industrial, ecological and cultural project took its cue. 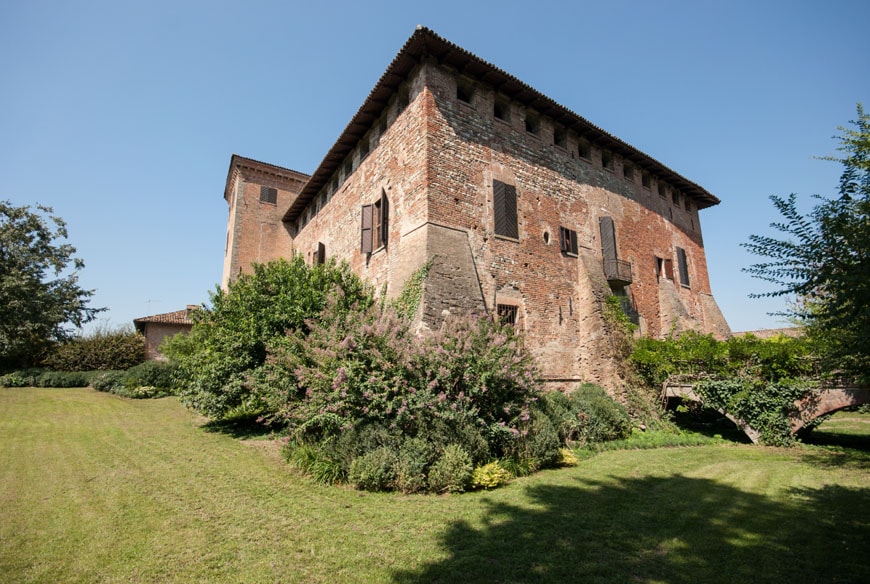 The Castelbosco castle near Piacenza, Italy, home of The Shit Museum; photo © Inexhibit, 2015 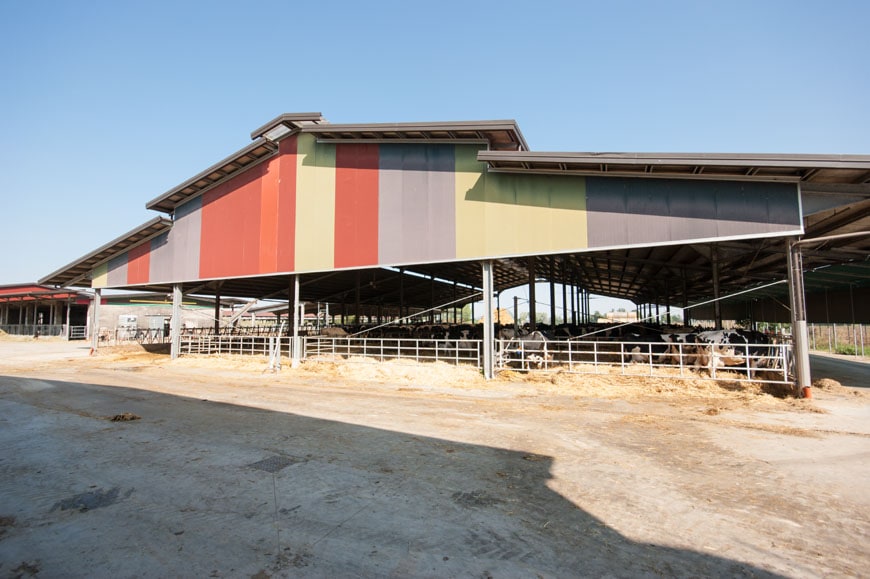 One of the cow sheds, designed in collaboration with the British artist David Tremlett; photo © Inexhibit, 2015 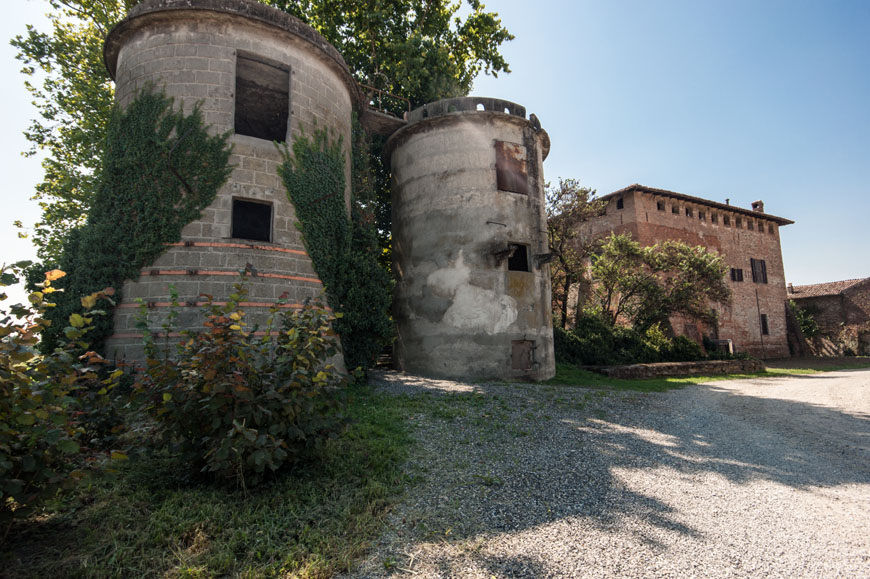 The castle and two old silos, seen from the farm; photo © Inexhibit, 2015

Indeed, starting from cow excrement, the farm now makes a remarkable amount of biogas – partly used to produce sustainably sourced energy for the farm itself and partly sold -, organic fertilizer for its 600 hectares of agricultural fields, as well as residual matter that, after a drying process, is used as plaster-filler or, mixed with clay, to manufacture innovative bricks for the construction industry.
State-of-the art technologies have been adopted that, along with avoiding air pollution and the dispersion of harmful chemical products into the soil, contribute to transform the milk production process into a virtuous cycle. A cycle capable to give value even to shit. 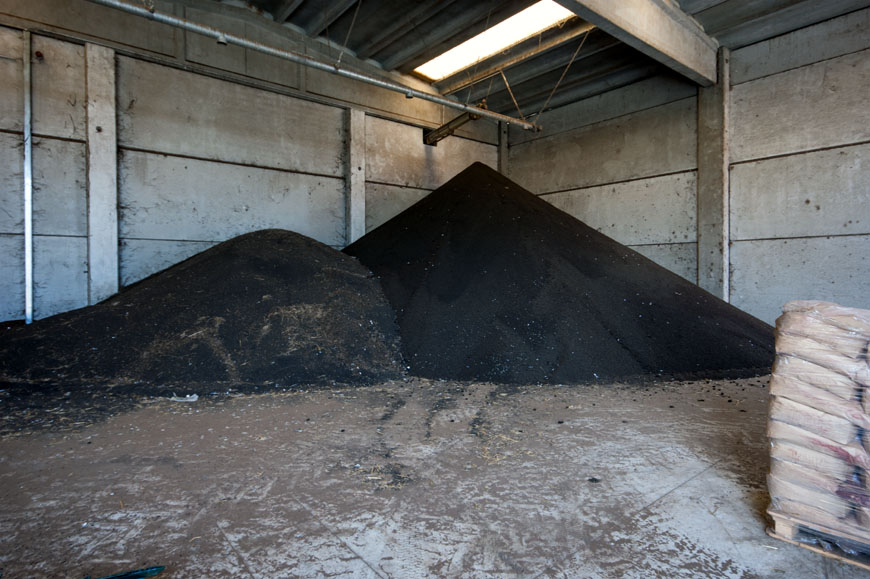 The dried residual matter is stored and used as plaster-filler and to manufacture bricks; photo © Inexhibit, 2015 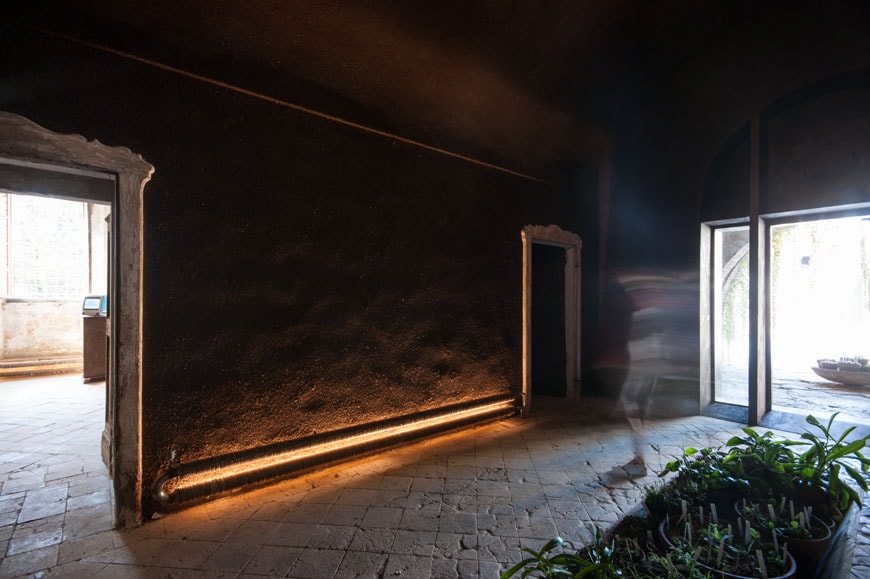 One of the museum’s rooms, plastered with dried residual matter-based stucco;  photo © Inexhibit, 2015 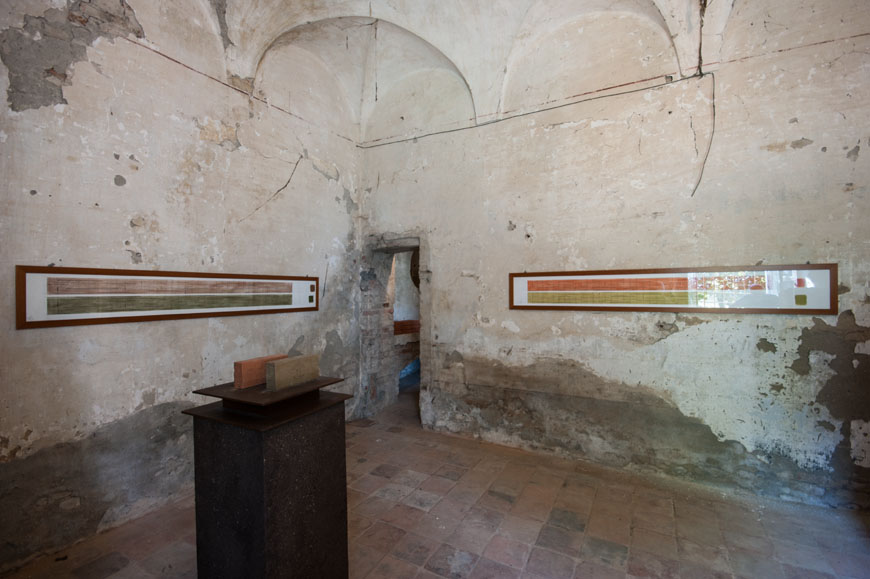 That is why the visit to the museum truly begins in the farmstead.
After crossing the courtyard of this small village, bordered by a chapel, a castle dating back to the 13th century, farmhand houses and barns, the visit proceeds in the 600-hectare dairy farm, which is an open-air art project in itself. The impressive digesters, large circular tanks where dung and waste are converted into biogas through an anaerobic process, have been designed in collaboration with the British artist David Tremlett, who also conceived the decoration of the farm’s production buildings, including cow sheds and a milk processing facility; an art work by Anne and Patrick Poirier, evoking a giant corn leaf and made with oat grass and, is installed nearby. 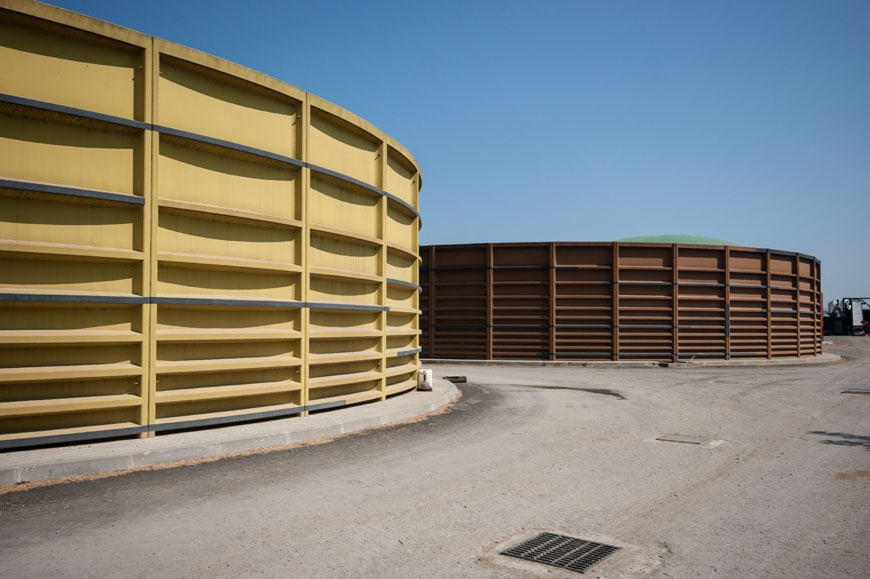 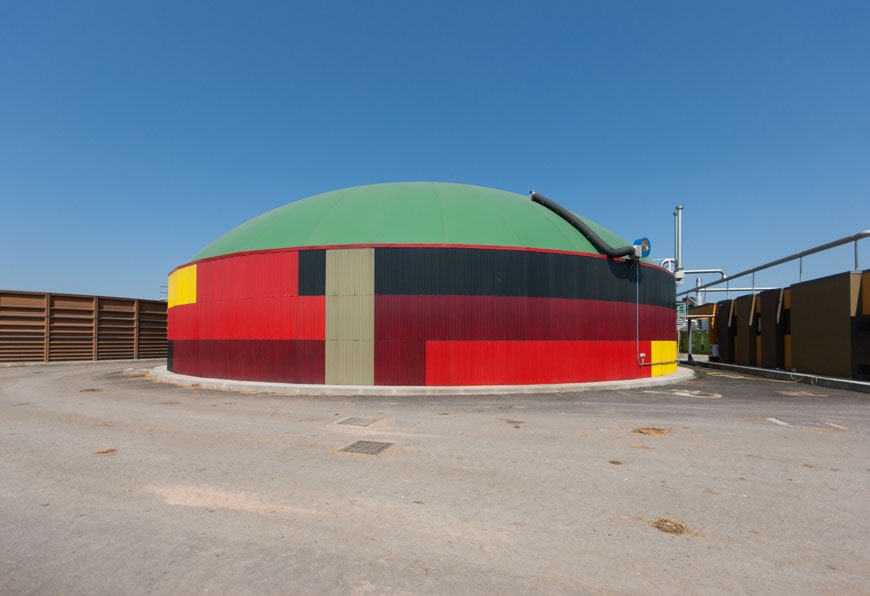 Some of the “digesters” designed in collaboration with David Tremlett; photo © Inexhibit, 2015

The art museum, housed at the ground floor of the castle, is the epitome of the overall project and an ode to the metamorphosis of matter. Like converting dung into energy is one of the outcomes of the dairy farm, similarly the museum is a workshop for art inspired by the theme of transformation. 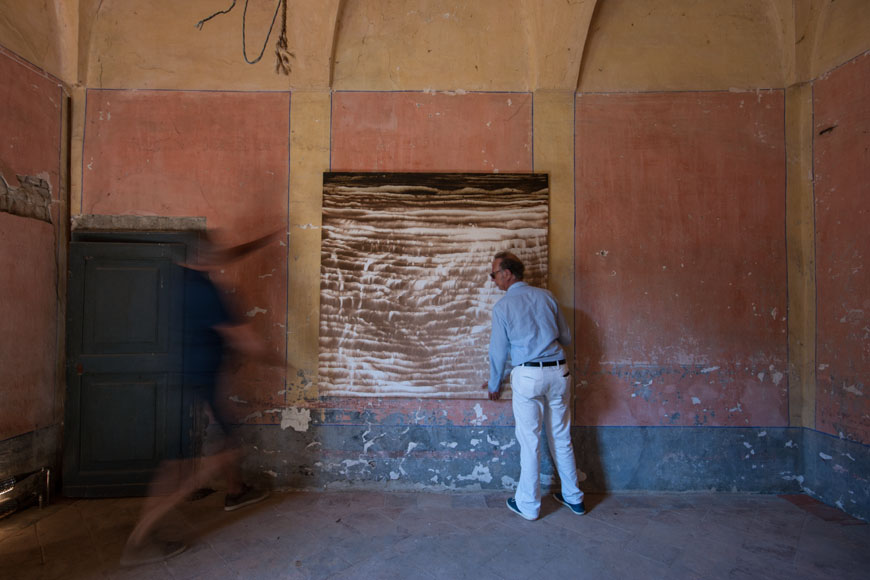 Paintings, audiovisuals, installations, and historical documents are arranged into the castle’s rooms, that are left in a partially restored state. Therefore, wall decorations, pavements, plasters, windows and doors of the building are just in the same condition as before it became a museum; with a touch of irony, a room where a pile of crates was amassed has been maintained as it was, treated like an art installation. 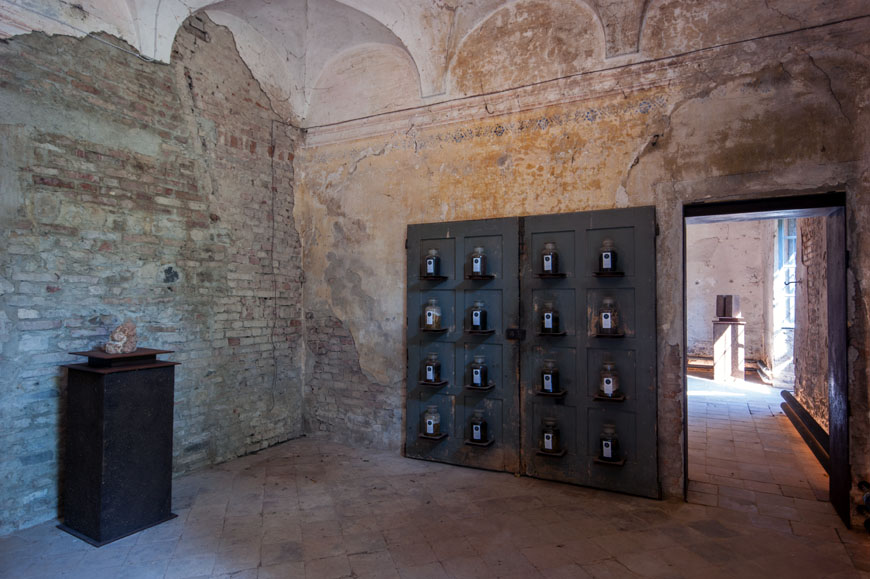 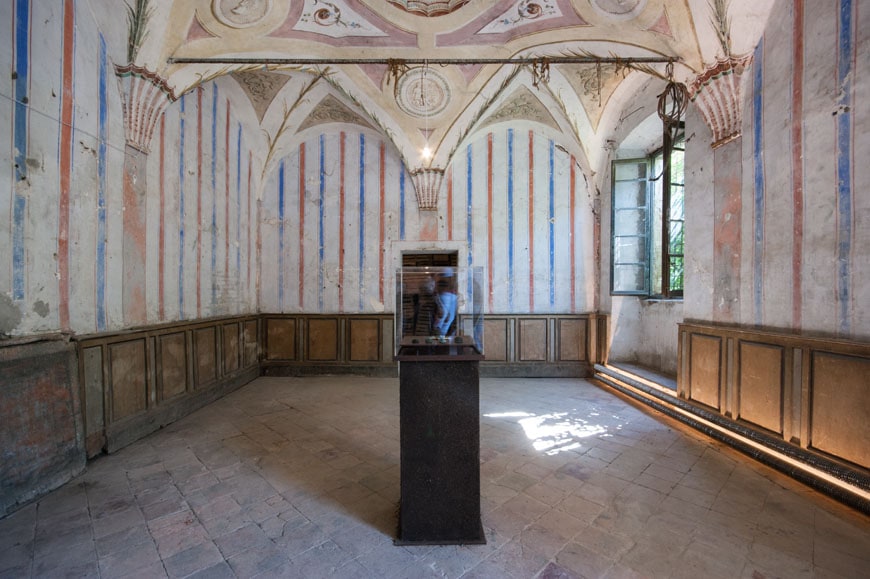 The room where ancient Egyptian dung beetles are on display; photo © Inexhibit, 201 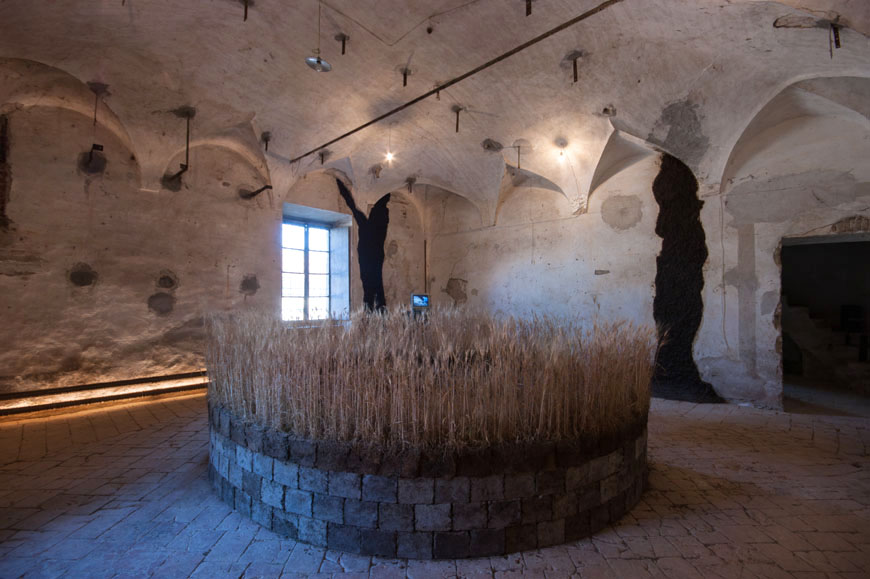 The reconstruction of an Iron Age Villanovan Hut, made of dung-based bricks, on which wheat seeds have been planted; photo © Inexhibit, 2015 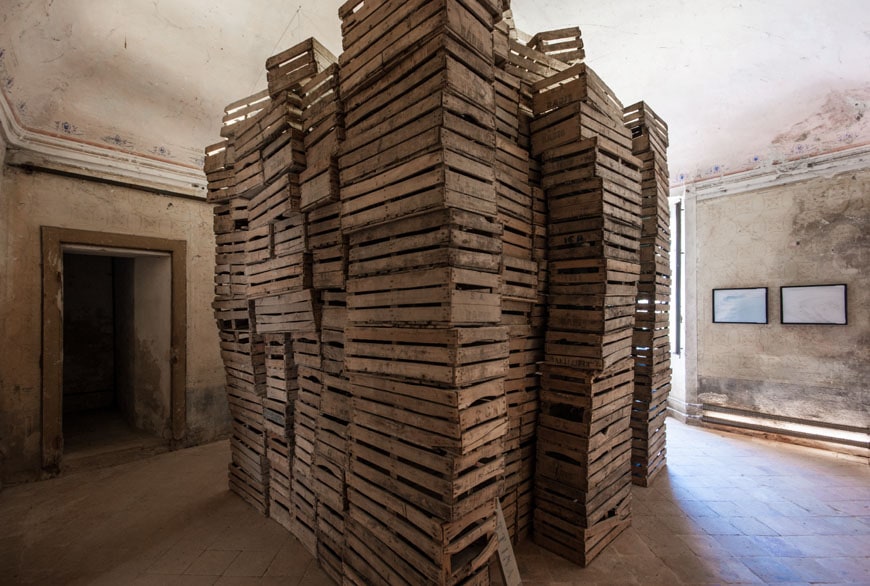 The exhibition in the castle’s rooms is an endless surprise. From a 200 million-year-old dinosaur coprolite, to an installation, inspired to the Naturalis Historia by Pliny, composed of apothecary vases filled with medical preparations made with dungs; from a video excerpt from Le Fantôme de la liberté by Luis Buñuel – where a toilet becomes a socializing means -, to ancient Egyptian dung beetles; from excrement-made Iron-age huts to the installation Methane biolight, based on light biologically generated by methanobacteria, each piece speaks about the transformation of natural matter capability to ennoble the humblest stuff, to glorify its magical, curative, and creative properties.

The visit ends with the video Resurrection by Daniel Spoerri, a caustic depiction of the inexorable relationship between food and ordure, and perhaps no conclusion is more appropriate that this. 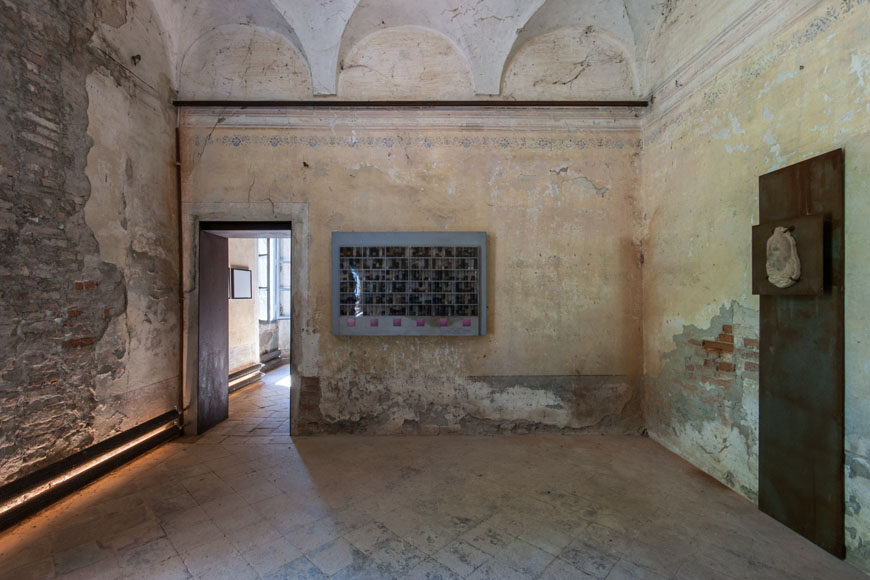 One of the museum’s rooms with the work “Wasser ist Nicht Wasser – Wasserfarben” by Michael Badura and an Etruscan ex-voto, 3rd-3nd century BC; photo © Inexhibit, 2015 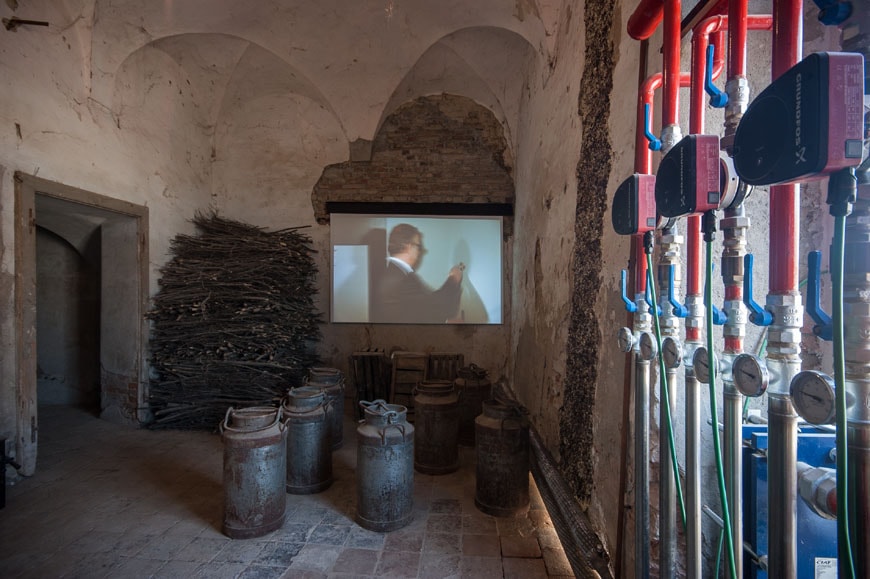 “Le Fantôme de la liberté” by Luis Buñuel; on the right, apart of the biogas-based heating system of the museum; photo © Inexhibit, 2015 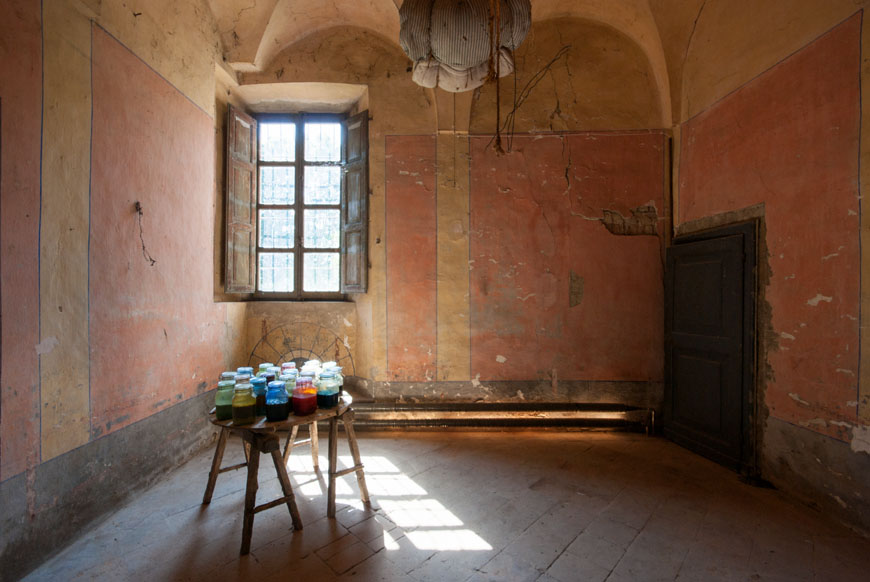