“The Floating Piers” by Christo transforms Lake Iseo into an artwork 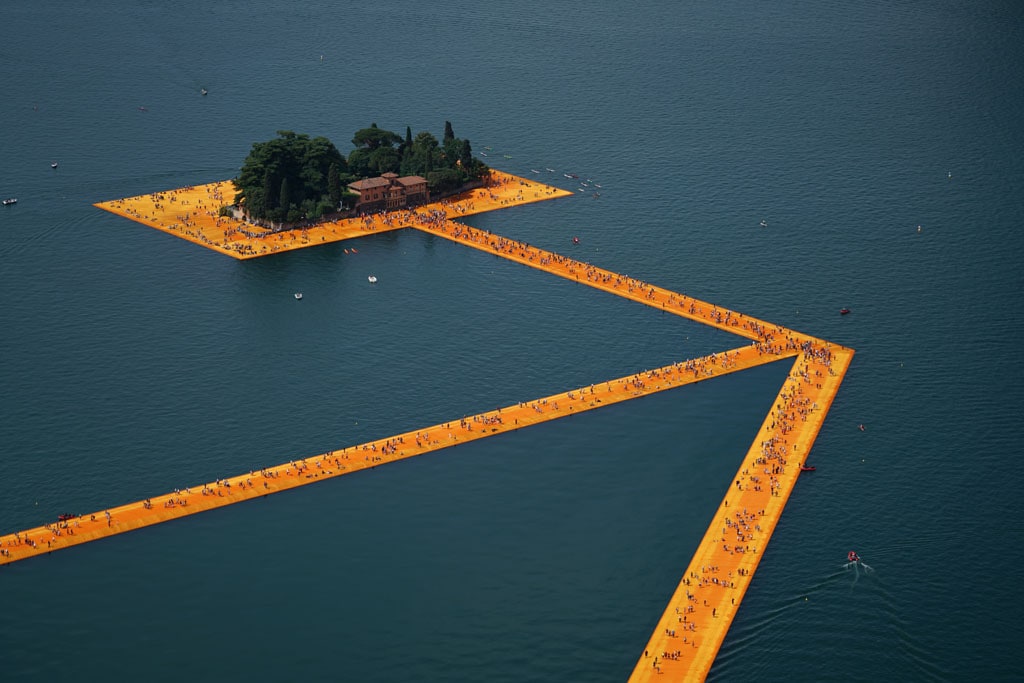 What about walking from island to island on a 16-meter / 50-foot wide network of golden piers that flow on the waters of one of the most dramatic lakes in Northern Italy?
Starting from June 18, for 16 days, people visiting the Lake Iseo, 100 kilometers north of Milan, will have that rare opportunity, furthermore stepping on one of the most spectacular and largest artworks ever conceived by acclaimed artist Christo.

A Bulgarian-born living in New York since 1968, Christo (Christo Vladimirov Javacheff, b. 1935) is world-known for his large-scale artworks which turn architectures and landscapes into gigantic pieces of art and create a dialogue between the artist’s mind, the visitors, and the urban and natural environments they encompass. 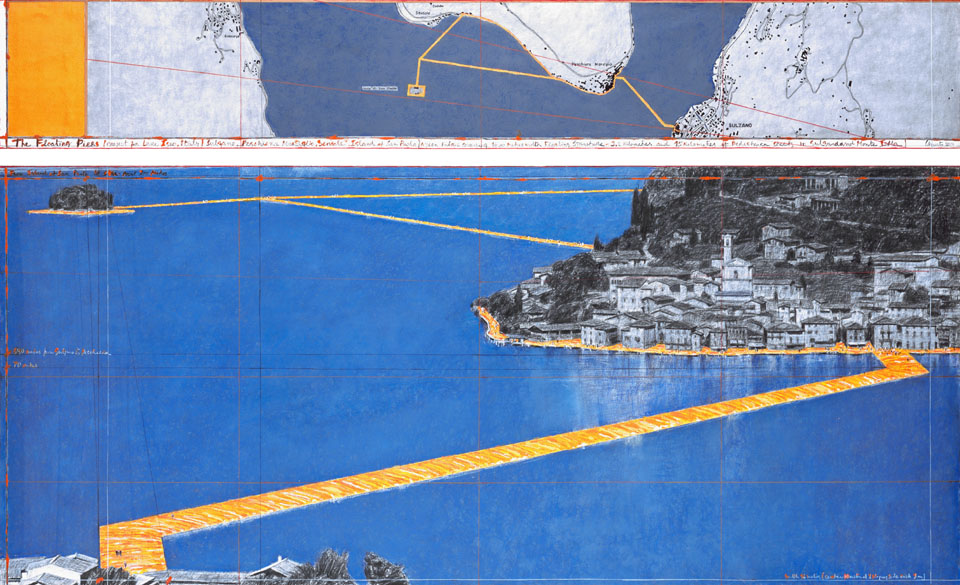 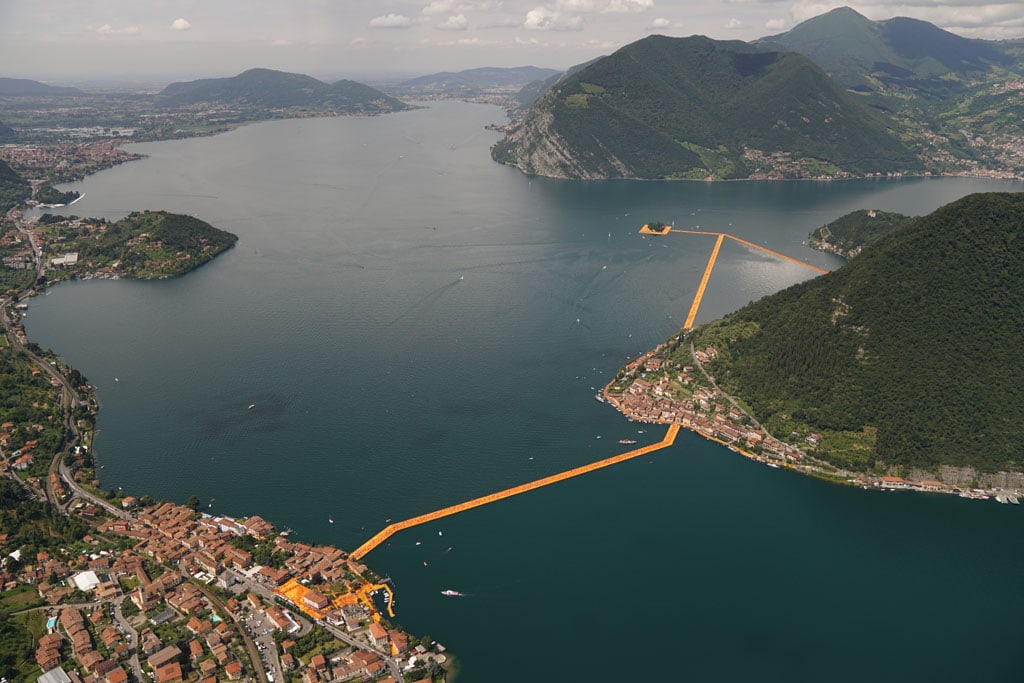 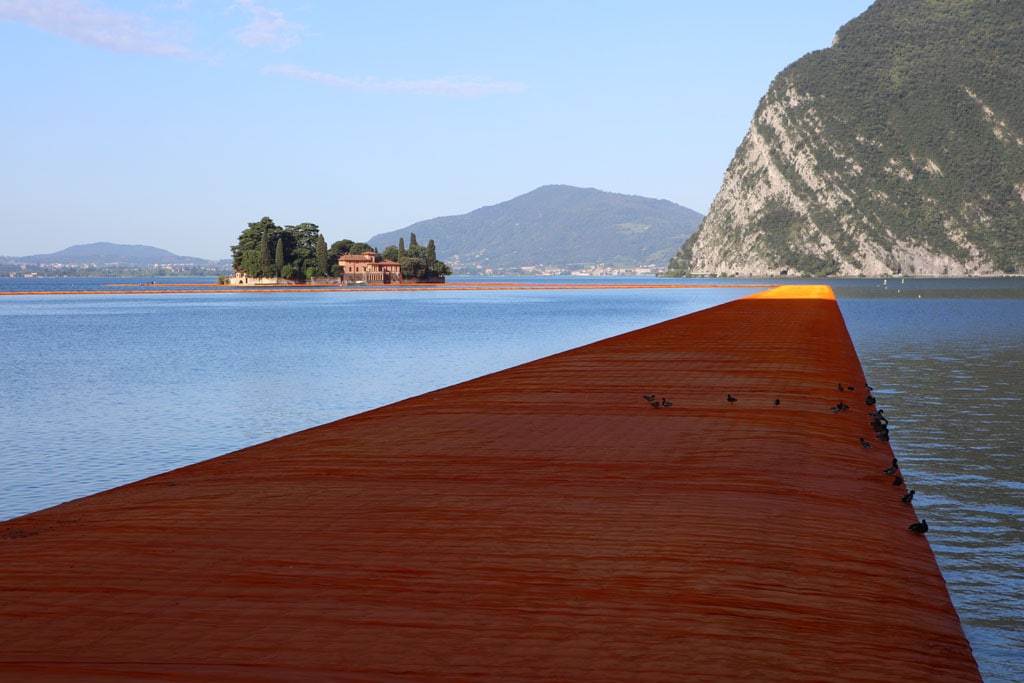 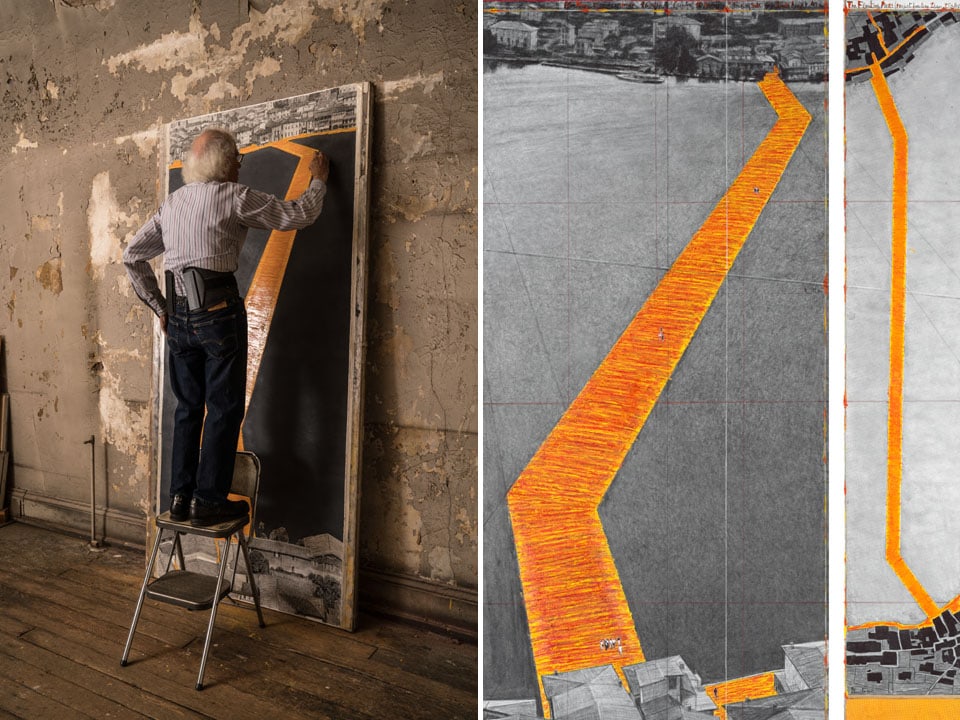 Christo in his studio working on a preparatory drawing for The Floating Piers, New York, November 2015, Photo: Wolfgang Volz © 2015 Christo 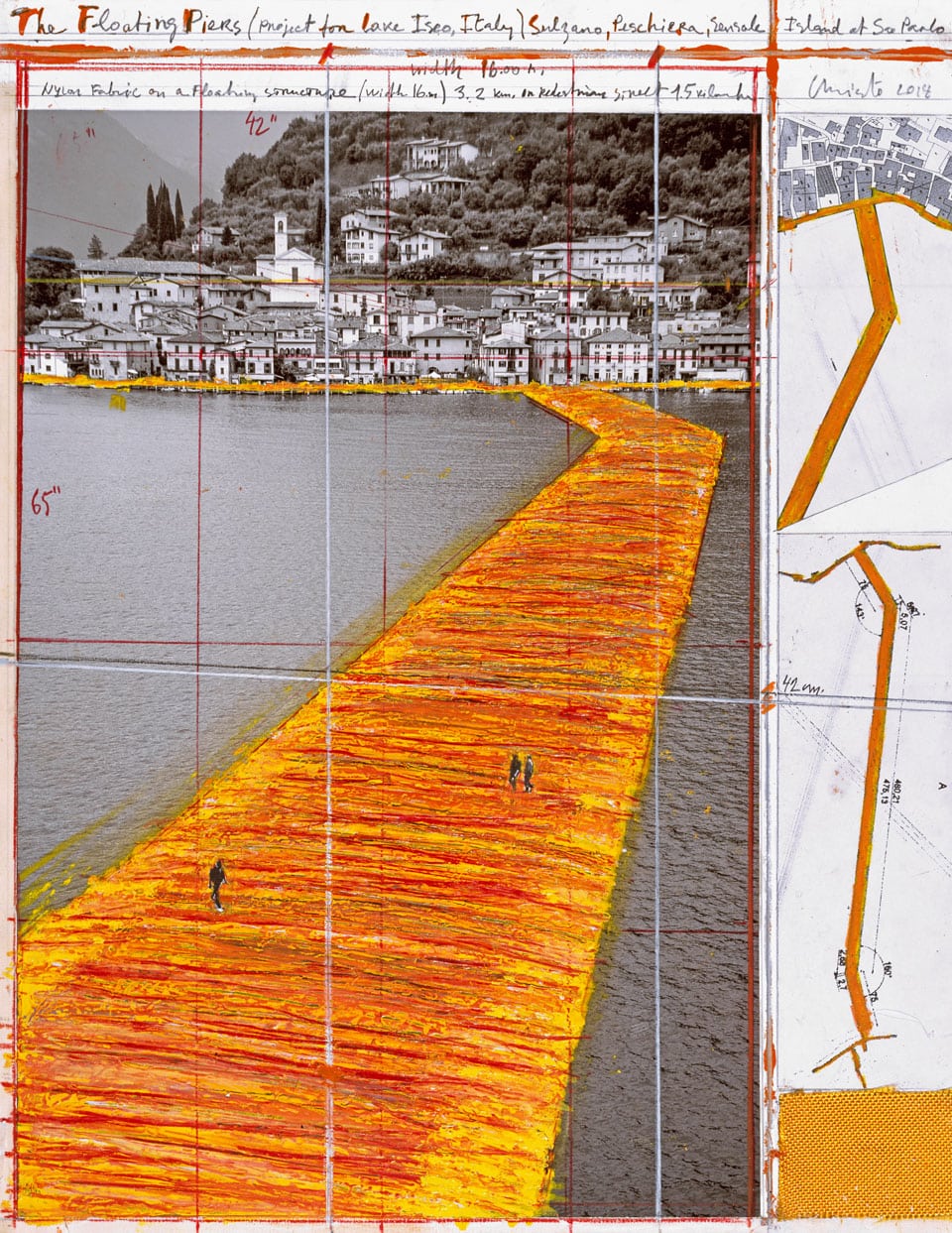 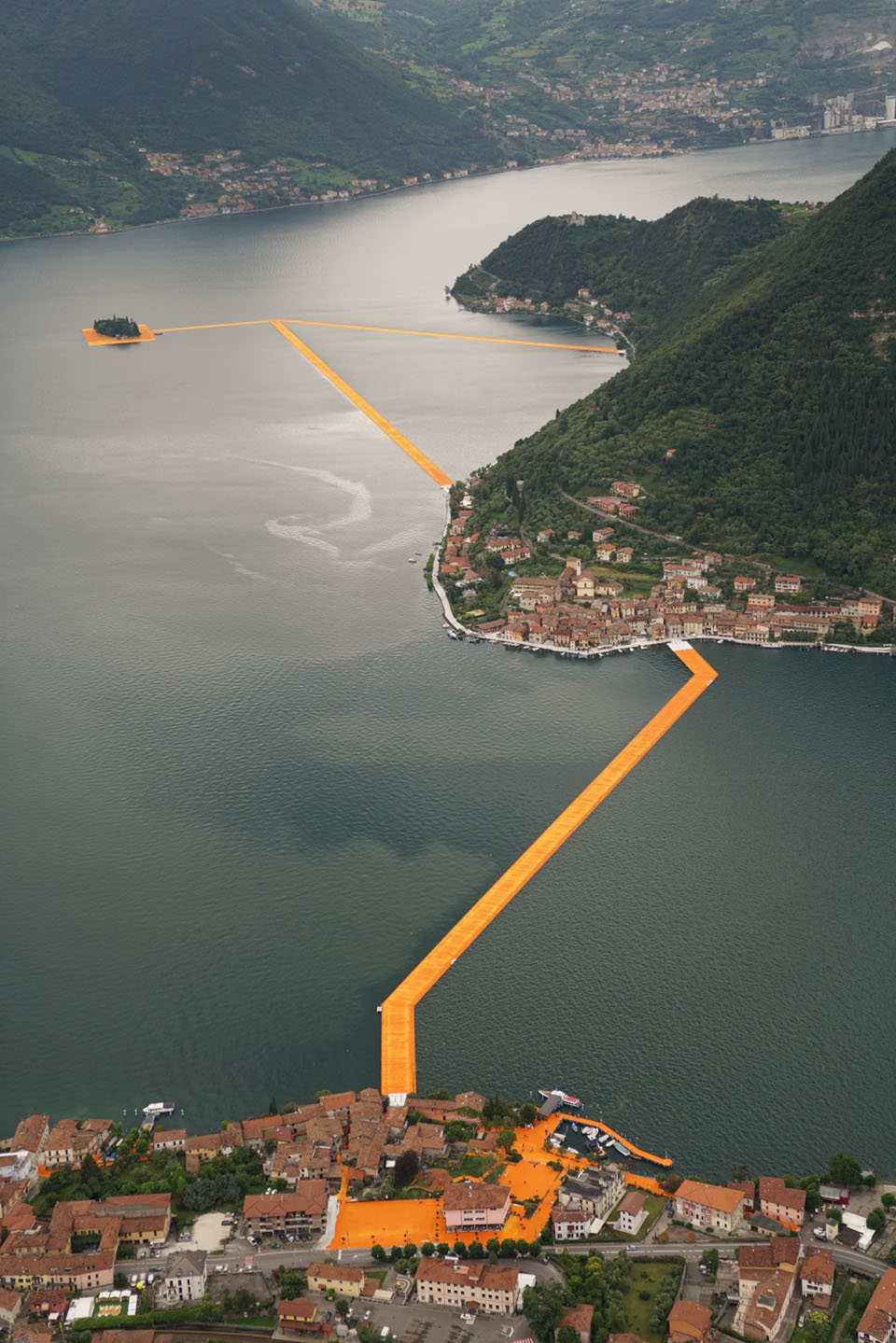 In 2014, Christo, together with his staff and well-respected art critic Germano Celant as project director, toured northern Italy looking for a lake suitable to become the location of a large floating art installation entitled Floating Piers, and Lake Iseo was eventually chosen as the ideal place.

Located in the pre-alpine province of Brescia, not far from Milan, with an area of about 65 square kilometers (24 square miles) Lake Iseo is the smallest of Lombardy’s “big lakes”, and far less known than lakes Garda or Como; yet its intimate character, the mountains surrounding it and the beautiful islands in its middle (Montisola, roughly meaning “mount-island”, and the tiny islands of San Paolo and Loreto) makes its perhaps the most mysterious and dramatic of all major Italian lakes. 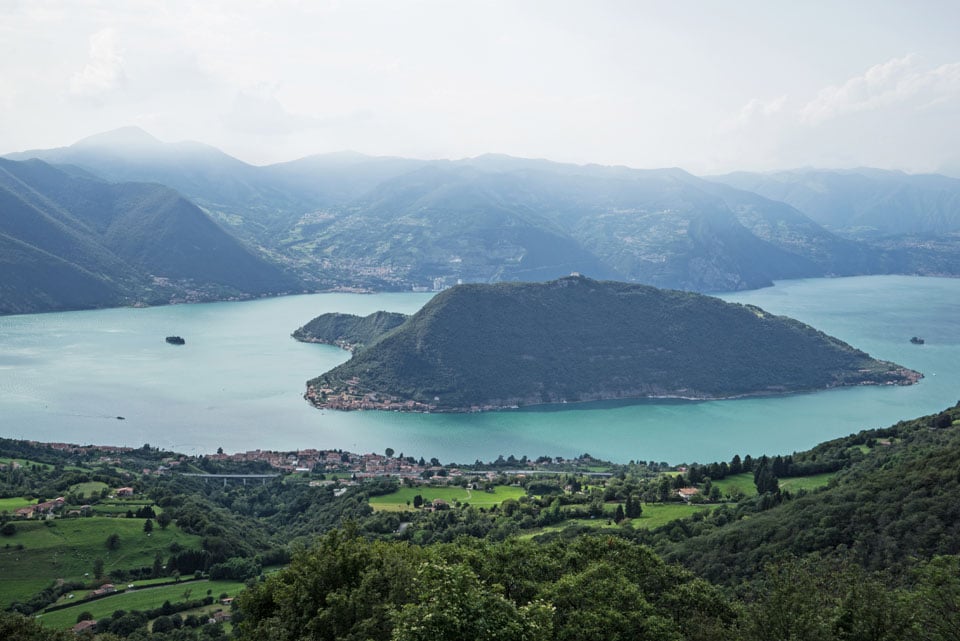 Lake Iseo with the town of Sulzano in the foreground, the island of Monte Isola in the center and the island of San Paolo on the left, Photo: Wolfgang Volz 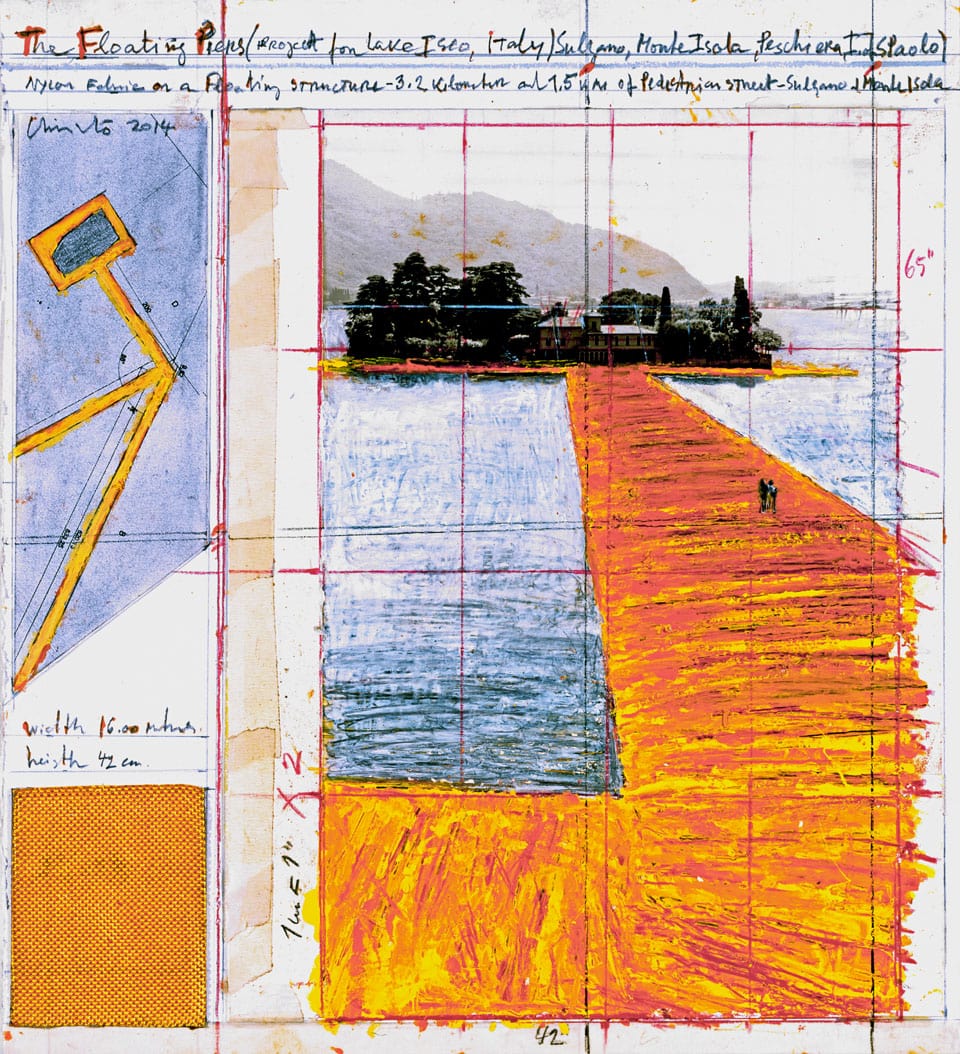 With Floating Piers, Christo gives the visitors the uncommon opportunities to walk on water, experience artwork by moving to and fro it, and create unconventional perspectives on the lake, its villages, and surroundings.

The giant installation comprises a 4.5-kilometers-long / 2.8-mile-long walkway covered with 70,000 square meters of orange-yellow fabric; about two-thirds of the path are made of piers floating on water.

The piers, connected through ropes to a series of underwater concrete anchors positioned on the lake bed about 90 meters below the water surface, are made of 200,000 high-density recyclable polyethylene modules.

The fabric with which piers and land paths are covered is a special textile produced by the German manufacturer Setex. 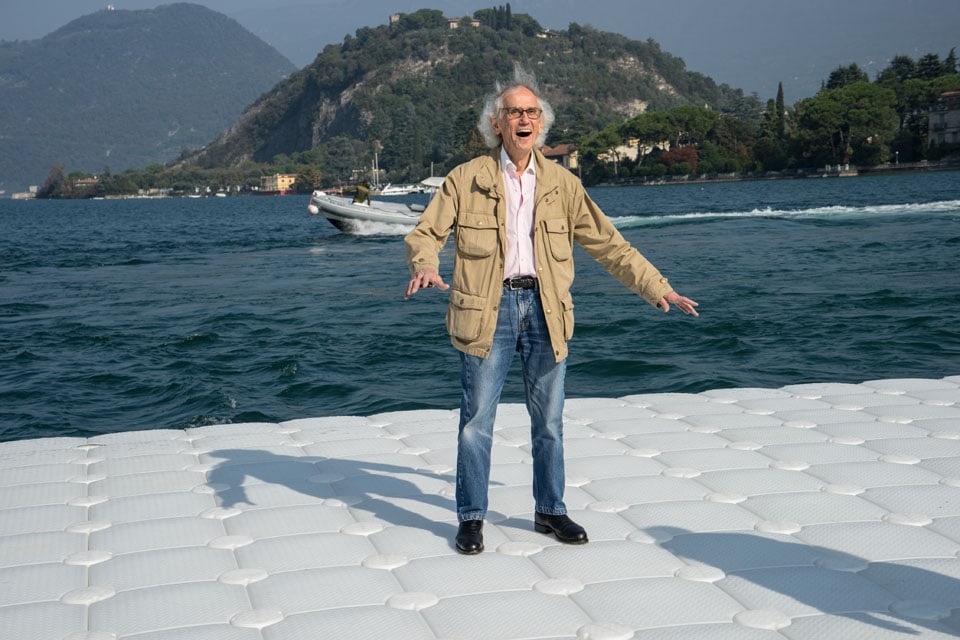 October 2015, Christo testing the floating modules and how the piers undulate with the movement of the waves, Photo: Wolfgang Volz 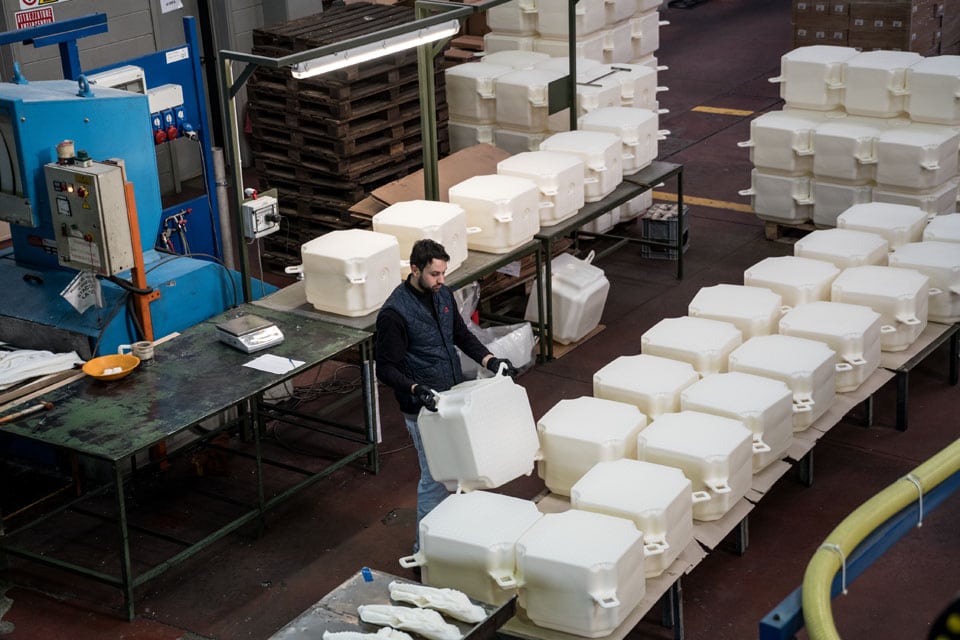 The high-density polyethylene cubes were manufactured over eight months at a factory in Verbania, on the Lake Maggiore, Photo: Wolfgang Volz 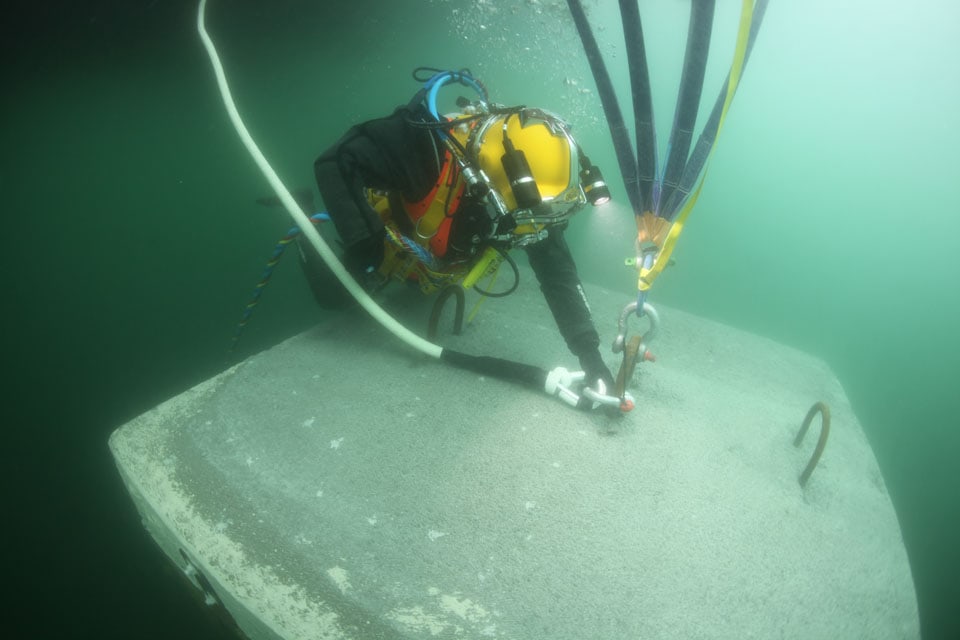 A diver connects a rope to one of the anchors which keep the piers in place, March 2016
Photo: Wolfgang Volz 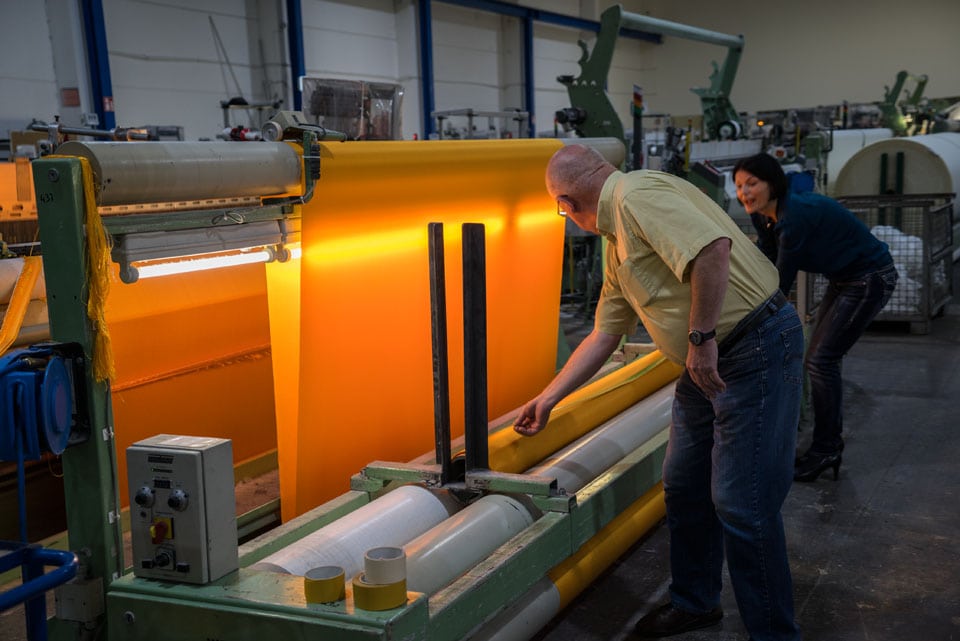 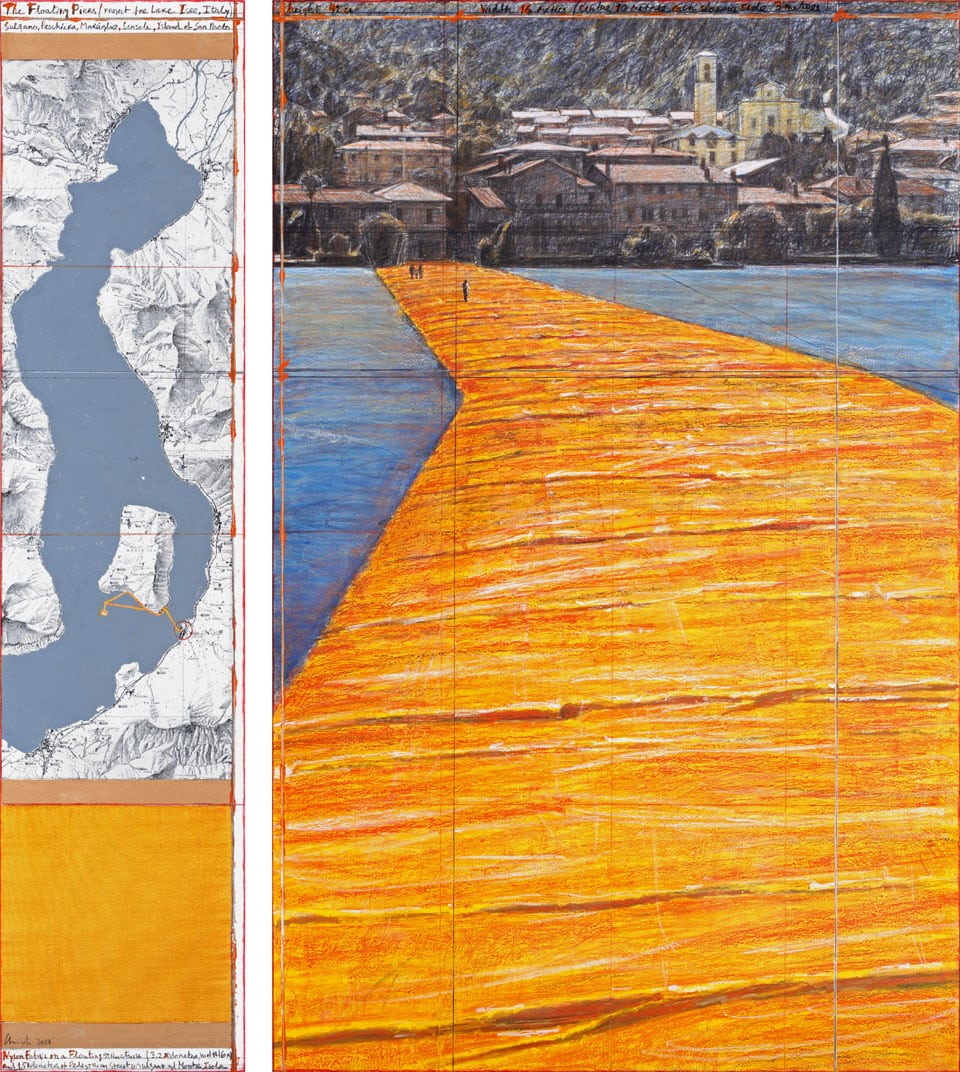 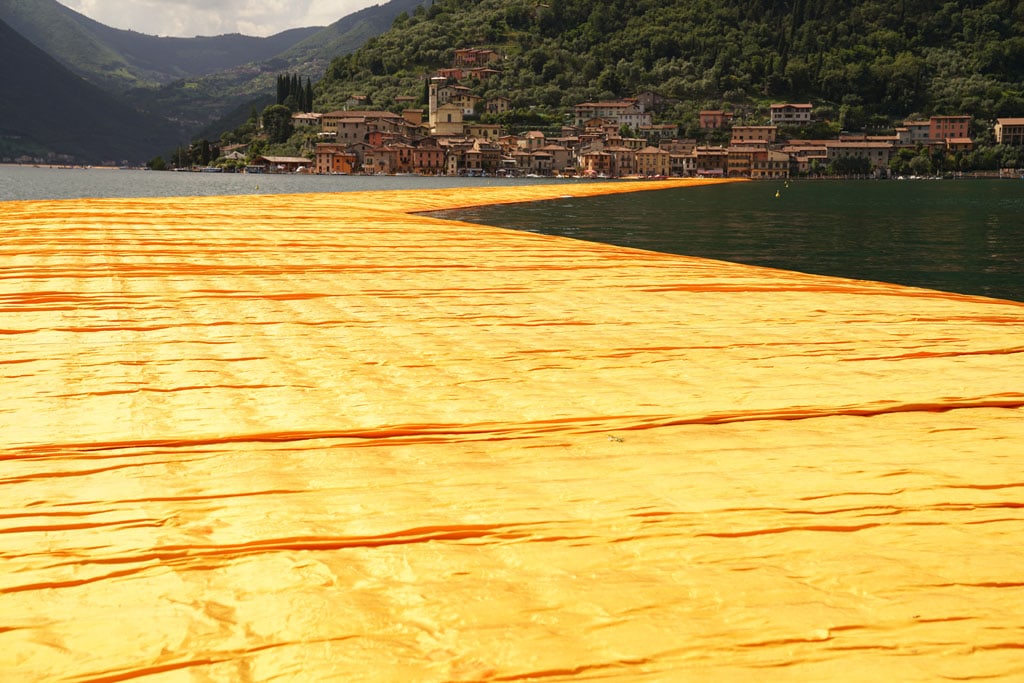 The floating blocks are fastened to steel frames, connected with special joints designed to allow the piers to oscillate up and down accordingly to the wavy movement of the lake. 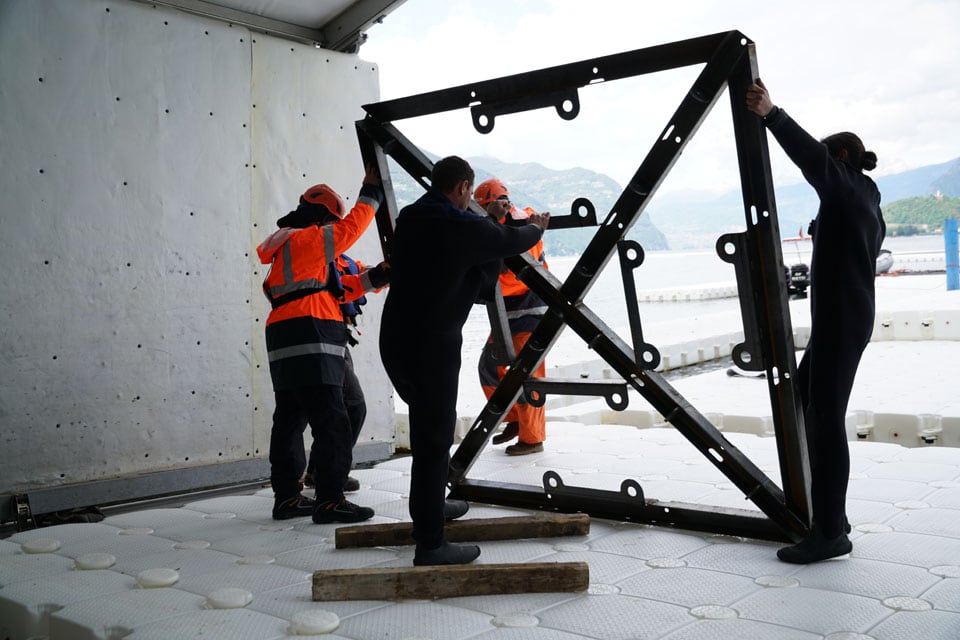 One of the steel frames is going to be attached to the underside of the floating elements, April 2016, Photo: Wolfgang Volz

The piers connect the lakeside in the village of Sulzano to the island of Monte Isola, and from here reach the small island of San Paolo, which will be entirely encircled by a floating platform. 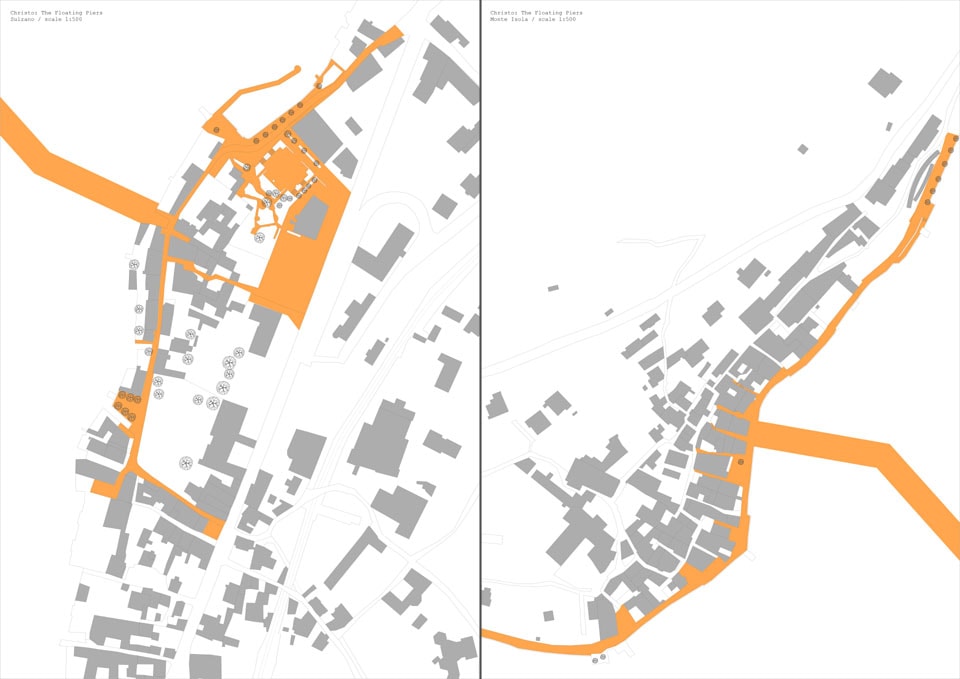 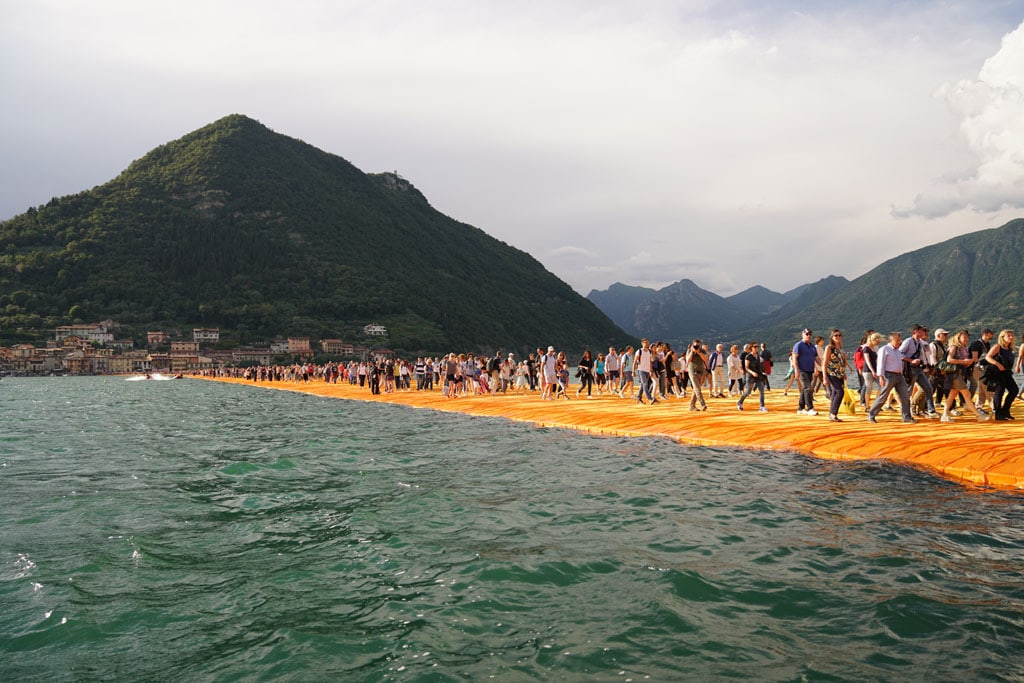 Some 11,000 people can access the artwork simultaneously, Photo: Wolfgang Volz 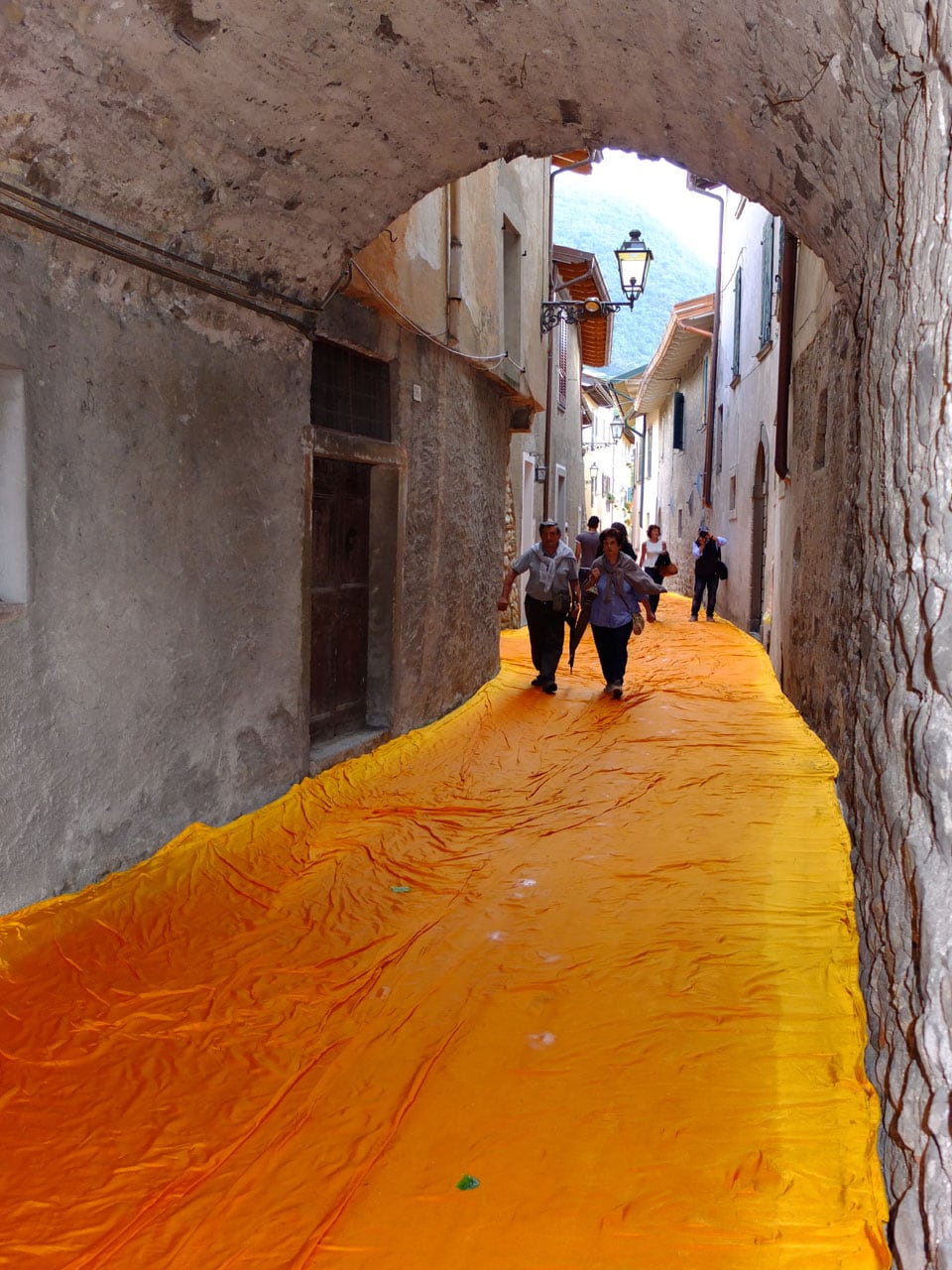 The installation also encompasses the narrow streets of the villages of Sulzano and Montisola, Photo: Wolfgang Volz

The project is entirely funded by Christo himself, who expects to cover its costs of about 10 million euros (11.3 million US dollars) through the sale of his artworks.

Italian newspapers report that some seven hundred thousand visitors are expected in the two weeks during which the installation will be open and that all hotels nearby are sold-out.

As anticipated, the installation “Floating Piers” is open to the public, free of charge, from June 18 through July 3, 2016. 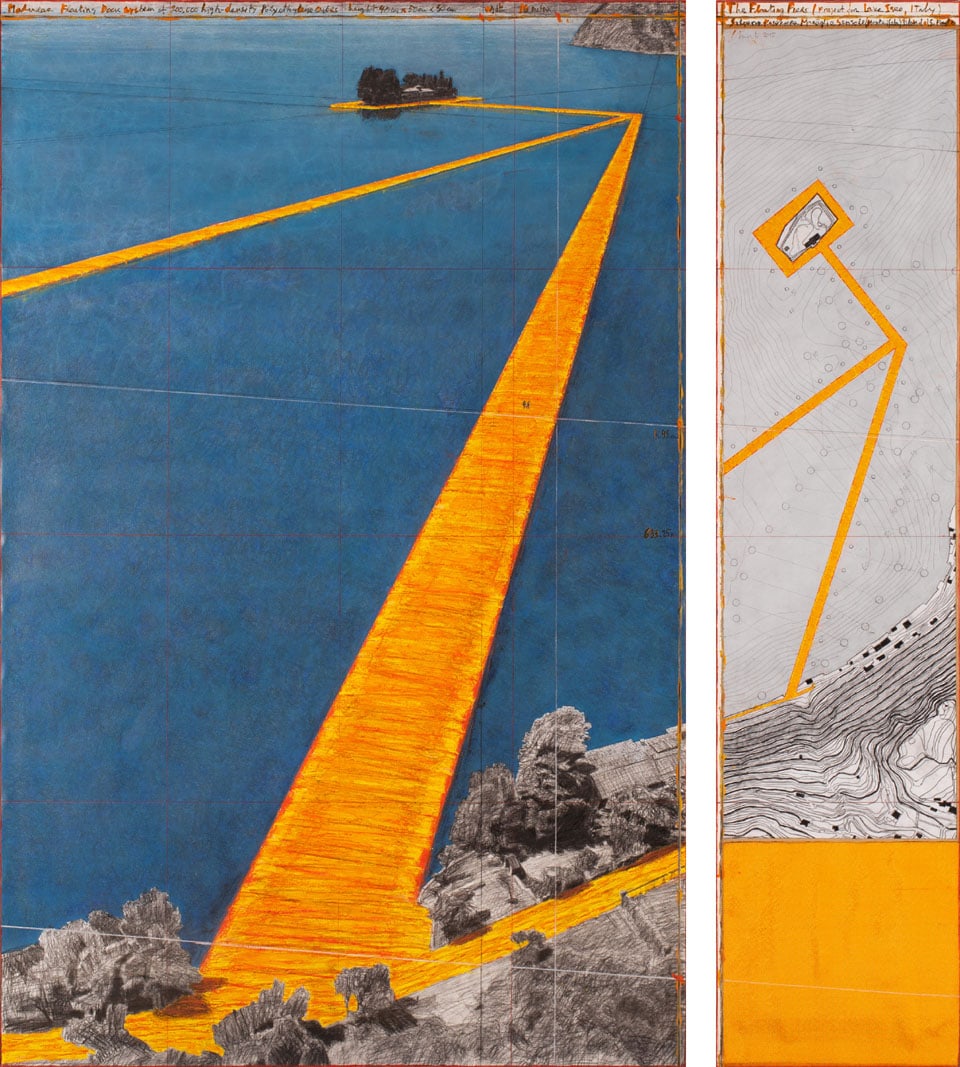 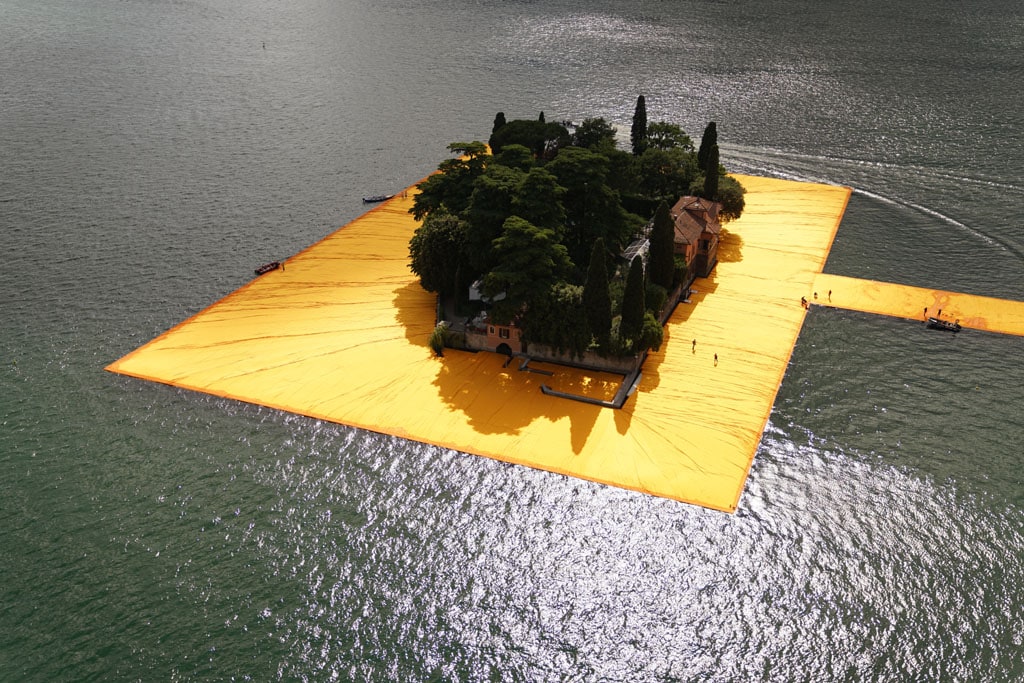 The “floating pier” running around the island of San Paolo, Photo: Wolfgang Volz